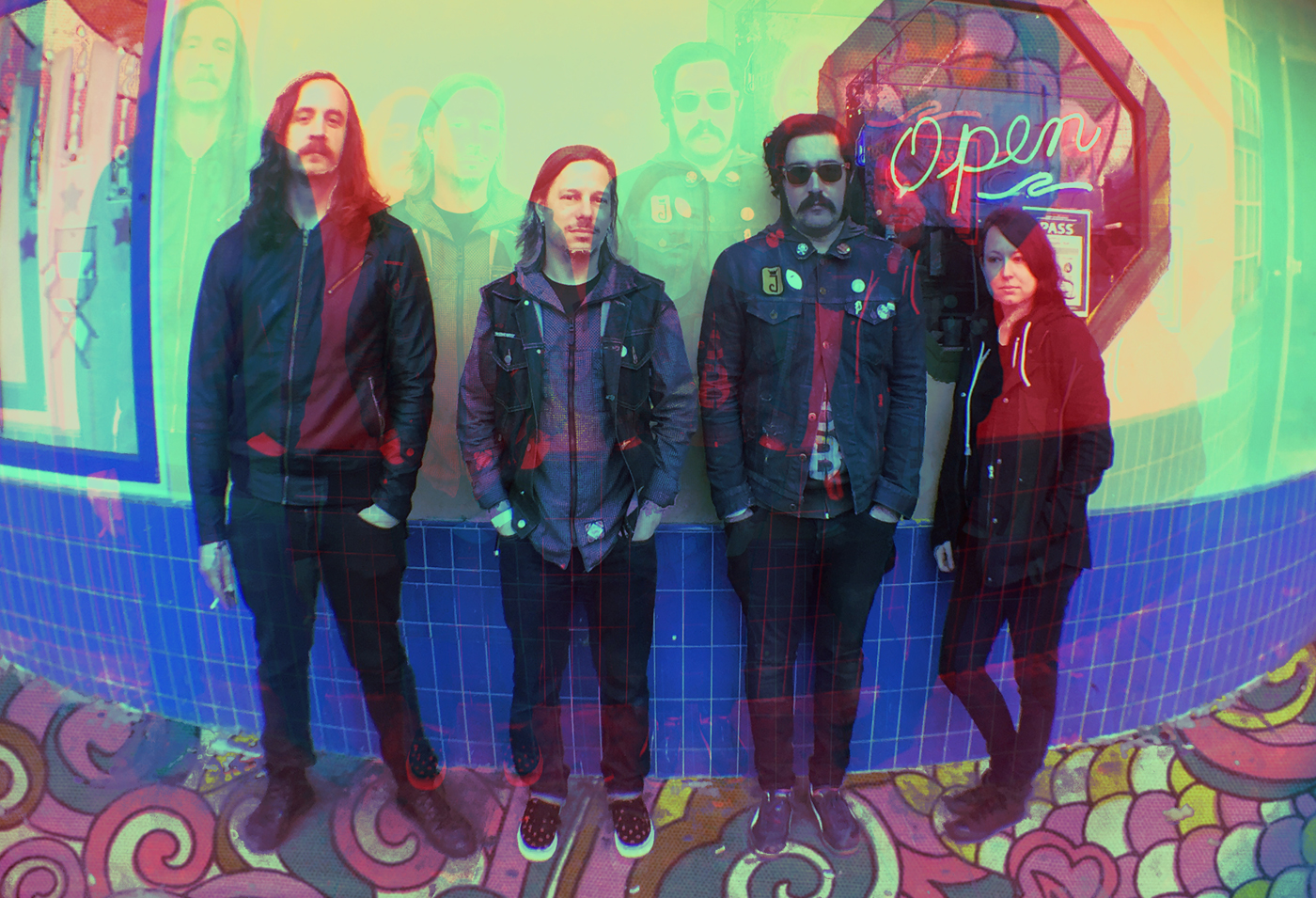 Anthony Paganelli has been at a monster truck rally all day long with his son. When Submerge catches up with Horseneck’s guitarist/vocalist (affectionately called “Pag”), he’s slightly frazzled by the spectacle of the subculture drawn to such an affair, lamenting the unbroken yelps of a patron directly behind him for the entirety of the event. It’s an interesting anecdote, considering Paganelli’s notoriety as a bit of a screamer himself. The drain of the day’s events could be why most of the rest of Horseneck admit some confusion when our interview begins.

“We cleaned the house for this phone interview, just so you know,” says guitarist Lance Jackman.

Paganelli interjects, “Apparently I forgot to tell them this was a phone interview.”

“This is for the cover of Rolling Stone, right?” adds Jackman.

Levity is an undeniable ingredient in Horseneck’s auditory alchemy. The band—rounded out by drummer Jess Gowrie and bassist Lennon Hudson—are gearing up for the release of their first full-length album, Heavy Trip, which they are self-releasing. Unlike the somewhat spastic stoner thrashers of the band’s duo of 2013 EP releases, Heavy Trip was endeavored from the outset as a fuller, more realized artistic vision for Horseneck.

“The two EPs were essentially early songs that I just wrote quickly and didn’t put too much thought into,” admits Paganelli of the Belly Full of Blood and The Worst People Ever EPs. Both EPs were originally released only digitally via Artery Recordings, with whom the band cut ties shortly after. Consequently, neither EP can be heard online, save for a scant few YouTube clips.

Heavy Trip, on the other hand, revels in its musical inclusivity. Writing as a group for the first time, Horseneck fortified its typically ferocious brand of sludge-y, riff-forward metal with more expansive instrumentation—namely lots of keyboards and horns.

Existing somewhere within the sonic field of Murder City Devils and Red Fang, Heavy Trip sounds like a band unafraid to push the coveted tenets of heavy music to more nuanced volumes.

“We went into it with expectations of doing more,” says Paganelli. “Then we got silly and thought, ‘What if we put some horns on it? Maybe some background singers?’”

The result is no less abrasive on tunes like “P.A.G.,” a particularly punishing exhibition of stoner-metal that folds in tasteful B3 organ work, an accoutrement that levies new ciphers of sound into an otherwise brutish composition.

“There are some songs, like ‘Hangman,’ where there is so much going on in it that no one would know unless they were here recording it with us,” says Jackman, who recorded Heavy Trip at his studio, The Dock.

“Hangman” is perhaps the record’s most dynamic track, blooming slowly from a droning mellotron/trumpet intro flourished by a slide guitar lead before more organs, refined drumming and thudding bass begin to open a wormhole of impending noise. The song’s shapeshifting is indicative of Horseneck’s varied musical inspirations, as well as their desire to feature both the light and dark of their nature as a band.

“I think the record shows our lighter side a little, too,” adds Gowrie, who also drums for Chelsea Wolfe. “We take the music seriously, but we don’t really take ourselves seriously. In doing that I think it allows us to experiment with different sounds. So you get to see both sides of the band.”

“We’re the only band like us rocking Doobie Brothers,” says Jackman. “Half the time we go out to our practice space and just jam on ‘70s tunes for hours.”

Horseneck’s humorous side plays a big role in their reputation. One needs only view the band’s hilarious video for The Worst People Ever’s “Driving to Idaho Alone,” featuring the band and a dozen other friends performing and partying entirely inside of an RV. Their most recent clip, for Heavy Trip’s “Michael Caine,” follows the costumed foursome pillaging and partying in downtown Sacramento, dressed as forest creatures and haunting Old Ironsides, among other locations.

“We just like to get goofy and have fun,” says Paganelli. “Plus videos are easy to make. Just throw on a rabbit suit and do whatever you want to do and it looks good. The band always had sort of an air of fun, like a party band. But not everything I write about is about partying. The music isn’t party music.”

Besides, beginning with Heavy Trip opener “Bird Worried,” it’s clear Horseneck are marching to the beat of their own bunny rabbit. Exploding in a classic-rock riff, the song’s rock tropes are applied thickly, with Paganelli and Jackman’s guitar runs accenting musical segues between song sections. Featured largely in the track are the backing vocals of Sharlotte Gibson, who was once backup singer for Whitney Houston. The contrast of the song’s churning thuds with Gibson’s soaring tenor is a revelation, and just one of many things that makes Heavy Trip a remarkable album. Gibson was even nice enough not to give the band too much guff about their song “Bobby Brown.”

Those keeping score at home may note the inclusion of one seemingly nepotistic song title in “P.A.G.” (it’s about post-alcohol guilt), one ode to one of Britain’s finest actors in “Michael Caine” (in reference to a web video of people reading the words “my cocaine” and realizing it’s how Michael Caine says his own name) and to one of R&B’s most notorious bad boys in “Bobby Brown.”

“A lot of bands write a song and have a working title for a song until they finish it and then they name it something serious,” explains Paganelli. “We just never change it.”

For their album release show, Horseneck plans to perform the new record with everyone who featured on it, including adding a horn section and keys for the first time in a live setting. Managing the release of the record on their own, they’ll have a limited run of cassette tapes, followed by a digital release. With Gowrie bound to extensive touring commitments with Chelsea Wolfe, and with Paganelli’s duties as guitarist in seminal Sacto noise-rockers Will Haven, Horseneck is likely to keep things regional for the time being.

“If someone finds out about the record and wants to talk to us about it, we’ll probably talk to them,” says Paganelli. “I feel like we can do most of the stuff ourselves. We’re not going on tour 300 days a year, but we’re not opposed to touring either.

“I don’t wanna fall into a category or anything, but … I don’t know what I’m talking about. I’ve been at a monster truck jam all day, man.”

Horseneck releases Heavy Trip Friday, Feb. 17, 2017, at Harlow’s (2708 J St.). Co-headlining and releasing their own new record are Kill the Precedent, and opening are Peace Killers and The Moans. Doors at 8 p.m.; show at 9 p.m. 21-and-over. Tickets are $10-12. For more info on Horseneck, visit Facebook.com/horseneckmusic. Stream the track “Bobby Brown” via the player below.