No End Left in Sight 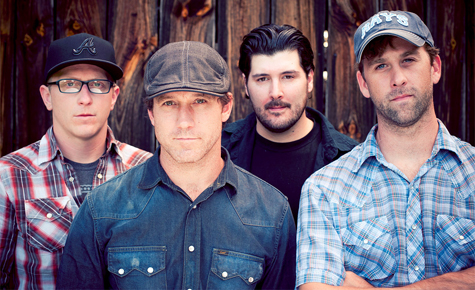 Hot Water Music’s Return to Recording and the Road

That Gainesville, Fla.’s Hot Water Music has become the elder statesman of the post-punk renaissance, first sprouted during the mid-‘90s, isn’t much of a surprise. The quartet—helmed by vocalists/guitarists Chris Wollard and Chuck Ragan, and rounded out by bassist Jason Black and drummer George Rebelo—exploded onto the scene a gang of growling ruffians with their 1995 debut, Finding the Rhythms, and two years later with the seminal LP Fuel for the Hate Game. Those touchstones simmered with the roaring vocal delivery of a New York hardcore crew, bolstered by the indomitable rhythm tandem of Rebelo and Black. Volleying guttural, emotive refrains bent on unity and a smattering of angst, the band acquired a fiercely loyal fan base helpless to ignore the dynamic of melodic rage the band had perfected.

Then came the ‘00s, a decade that saw the band struggling to maintain the camaraderie that had catapulted it onto big-time tours and found it flirting with mainstream notoriety. After Ragan left the band in 2005, HWM went on hiatus, then outright disbanded, allowing for a flurry of side projects that became full-time gigs—namely The Draft, featuring Wollard, Rebelo and Black; and Ragan’s fantastic folk-roots solo project.

With the spring 2012 release of Hot Water Music’s first album in eight years, Exister, the band has found itself in the familiar position of endless months of touring, a positively ravenous fan uprising and a return to the energy that spawned seven LPs and countless EPs prior to its break. Black says the hiatus, and the collaboration with new projects and different musicians, was a necessary hurdle for the band’s evolution.

“It’s great to be able to play with other musicians,” says Black. “If you’re constantly playing with the same people doing the same things, it’s fairly hard to grow. We’ve always been interested in evolving as a band and as musicians, so doing other projects [was] a big help for us. We’re all vastly different players and songwriters than we were when we did The New What Next, and that’s completely attributed to these outside experiences.”

The last album the band released before Exister, 2004’s The New What Next, seemed poised to set up HWM for a big splash commercially. The album was the band’s third for indie monolith Epitaph Records at the exact fulcrum when the label was diversifying its catalog and generating more attention during the mainstream’s sudden Panacea shift toward looking at indies—again—for the new what’s next.

To be accurate, the band had no hardship breakdown that caused its temporary pause, no mid-tour fisticuffs or hush-hush drug addiction salaciousness. In fact, within two years of its split, HWM reconvened to perform live in their hometown. That one-off show snowballed into a few more, and a few more here and there until that bigger itch was finally scratched with the making of Exister.

To reign the whole thing in, HWM called upon legendary punk drummer Bill Stevenson (Descendents, Black Flag), and his Fort Collins, Colo., compound The Blasting Room to do the honors.

“Working with Bill and Jason [Livermore] at The Blasting Room was amazing,” relates Black. “They just fully understand our band and know how to make us a better version of Hot Water Music without influencing the material at all. [They produced] with vibe more than arrangements.

“We’d been working on the songs for Exister on the road for a while. I believe it was either ‘The Traps’ or ‘Mainline’ that came together as a band first. It was a great feeling; playing new material always is.”

The band had to adjust its writing routine, too, what with the members now residing all over the country. The band found the comforts of the digital age an invaluable asset in getting back into the swing of HWM 2.0.

“It’s been eight years since we’d released new material, so this was really the first record we’ve been so intertwined with the digital technology side of things,” says Black. “Being able to send song ideas back and forth was extremely integral to getting this record done.

“There was definitely an urgency to the writing and recording process that wouldn’t have been present had we all lived in the same area. Knowing you have X amount of time to write and record helps keep you from ending up writing and re-writing yourself into oblivion.”

Exister sounds as raw as some of HWM’s earliest material, replete with Ragan’s shredded-larynx lullabies, given a vehicle via anthemic, melodic punk rock riffage and driving rhythms. Songs such as the aforementioned “Mainline” exhibit a more stripped-down, straight-ahead approach than technically Herculean LPs like Fuel for the Hate Game. Black’s assessments of the band’s divergent methods for songwriting compared to before the band’s break is evident in Exister’s timeless takes on rock ‘n’ roll archetypes: huge choruses, deft songwriting by both Ragan and Wollard, and an almost irrevocable patina of singularity.

Simply put, Hot Water Music just doesn’t sound like anybody else, even when they’re playing Russian roulette with the recipe.

So what’s the secret to their success?

“It’s a pretty cliché answer,” says Black, “but we definitely wouldn’t be around at this point if it weren’t for our fans.”