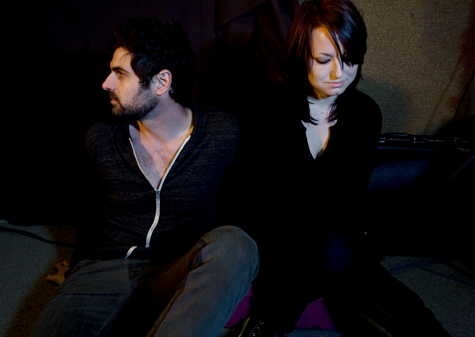 “Who do we think we are?” was the question looming over the heads of Sacramento heavy hitting two-piece I’m Dirty Too. After time spent in supporting roles in other bands, the duo’s members are stepping out of the shadows to be co-lead singers on their upcoming full-length debut, The Downhill Dive.

After being acquainted through the local scene for seven years, Zac Brown and Jess Gowrie formed I’m Dirty Too in 2009 to explore the rawer sides of rock they were unable to express in their former and current bands. Gowrie was part of The Drama and Red Host, while Brown was a performing member of Doom Bird, Dusty Brown and Tycho.

The duo jammed in a stoner rock and grunge style, but neither had ever fronted a band. When it came time to record a demo for the purpose of booking shows, they faced the music, as it were, to handle the duties themselves.

“I remember when we first started we didn’t even want to sing in front of each other,” Brown said.

“We were halfway up to Tahoe [for our first show] and I wanted to turn around and go home. I needed a Xanax I was so nervous about singing in front of people.” Gowrie chimed in, “I think after I sang my first song I moved my head away and the whole mic stand just fell over. It was a nightmare coming true.”

Booking an out of town show was part of their plan to gain confidence and receive honest feedback beyond their friends. They also played a game they called “Best Voice,” which involves singing along to radio songs. “You have to belt it out and nail it,” Brown said. “Like outside of your range.”

I’m Dirty Too sought the help of generous strangers on Kickstarter to record The Downhill Dive. They reached their goal and hit the studio in April, splitting time in The Hangar and Dusty Brown’s home studio. With the help of Kris Anaya of Doom Bird on production and Robert Cheek in the engineer’s chair, I’m Dirty Too recorded 12 new songs. When asked if any of the songs from their original demo release made onto the full-length record, Brown offered a quick and jovial, “No, that’s cheating, man!” 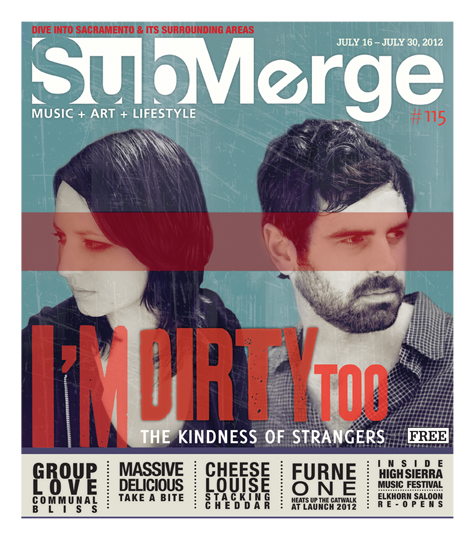 Why did you choose the Kickstarter route to fund your record?
Zac Brown: It’s pretty simple. We didn’t have the money to make a record on our own [laughs]. With a tool like Kickstarter out there we thought we might as well utilize it. It’s been really helpful for us.

And you reached your goal with only 39 backers.
Jess Gowrie: We had some special guests donate more than we ever imagined.
ZB: One guy in particular put quite a bit of money in. I think he first donated $100, which was very generous. Then, a few days later the guy upped the donation. It was crazy. Then, he did it again. Jess and I were like what’s going on, is this guy playing a joke on us?

We actually contacted him to say listen, you’re more than generous, and so what’s the deal? But, he just really liked the band and wanted to see the record made.

JG: Yeah, we would have had to ask parents and family members.
ZB: Or have a car wash.
[The donator was Matthew Woods Wilhoit of Prieta and Nine of Swords]

You guys went $215 over the goal amount. Do you have special plans for that extra cash or did you end up using it?
JG: We went way over budget. It just covered the recording costs. It didn’t cover the mixing and mastering.
ZB: It was a great starting point. We were under the delusion we could pay for the whole thing with it, but it didn’t happen. It ended up having to come out of pocket.

What were some of the goals you wanted to achieve with the sound that you discussed with Robert and Kris?
ZB: Well, first of all we’re a two-piece. Live, I put my signal through a bass amp and a guitar amp. I think we achieve a pretty full sound live for a two-piece. We were kind of up in the air on whether we wanted to play bass on the record. Kris basically said we should do exactly what we do live. We were both worried that it wasn’t going to have that low end, that growl a full traditional rock band four-piece gets.

We explained what we wanted to do with Robert, and he totally nailed it. I showed it to my friends and they said things like, “Oh, there’s bass on this part,” but nope, there’s just two guitars and drums. There’s one song with a Moog that my cousin Dusty Brown played. Other than that we achieved an accurate representation of what we do live. We wanted it loud but not overproduced like a lot of rock sounds now.

The grunge and stoner rock influences are there, and I even got a Beth Gibbons of Portishead vibe from a few moments within the record…
ZB: You just made Jess’s day right there. [Laughs] You honestly nailed our three biggest influences.

Is there anything within the record that I possibly missed? Some subtle influences that people might not catch upon first listen?
JG: Well, there is some hardcore country western in there [laughs]. It’s pretty cut and dry. That’s one thing I really like about our band, we stay to the point. A lot of people think there’s some Jesus and Mary Chain in there, but that’s the ‘90s, so we’ve got it covered.

Jess, how difficult is it to sing and hit those pretty notes, while playing the drums? There are drummers that sing, but it’s usually more of a punk ethos of shouting, rather than truly singing.
JG: It’s pretty difficult just because I don’t want to compromise the drums. I find that I’m concentrating way more on the vocals. You have to find that balance of hitting that note, while still playing a cool fill or whatever. I just have to get better at splitting my brain in two.

Have you considered vocal calisthenics? Like singing while running?
ZB: That might be a good idea, Jess.
JG: Yeah, when I do my aerobics in the morning I’ll sing to the EP.
ZB: I’ll film it, and we’ll throw it up on Facebook.

Zac, with being in Tycho, Doom Bird and Dusty Brown, what do you get from I’m Dirty Too that’s not present in those bands?
ZB: Well first and foremost, I finally get to rock out. I’ve not gotten to rock out playing music in a long time. I started with Dusty Brown, and his music is so full. When I first came into it the songs were written and I’d just try to do something over the top of it. There wasn’t a whole lot of room for that visceral release.
With this, I get to jam on my guitar and also it’s my music. I write in the other bands, but I’m less a part of it. I just occupy the guitar sphere. With this we collaborate. Jess has a lot of input on guitars and writes some of the riffs. We’re very hands on with everything. I’m basically creating this and if I blow a note on stage, it’s more of a release. I get to blow off a lot of steam. My playing has always been more of a feel or expression, so when I play this I get to channel that visceral and raw emotion.

I’m Dirty Too’s CD release show at The Townhouse Lounge is on Aug. 3, 2012. The show kicks off at 9 p.m., and those who donated to I’m Dirty Too’s Kickstarter campaign will be able to collect their rewards at the show.