Life in 24 Frames, In Focus 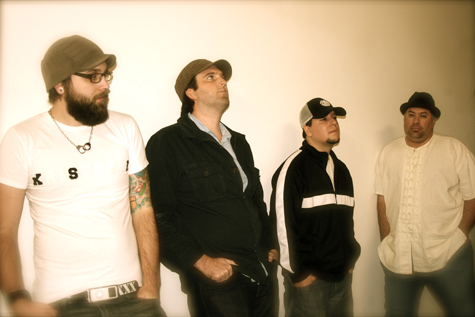 Life in 24 Frames takes a progressive approach to their music, in more ways than one

It’s time the music industry faces the truth that soon the CD will be an obsolete technology. While it is heartbreaking that record stores might disappear as well, it’s impossible to deny the power and ease of the MP3. With this in mind Sacramento’s Life in 24 Frames has developed a clever marketing strategy as an act of accepting these changing times.

The download card is so new it feels awkward. Life in 24 Frames use these business cards with download codes to spread the word. No physical copy exists of the band’s music; rather demand is created through limited time offers on its Web site. The response has been mostly enthusiastic, but the band worries that perhaps there is something lost in translation when they give out cards to fans.

After a show in San Diego, the band was loading up when a girl looking to purchase the band’s music approached. When the lead singer Kris tried to give her a card, she respectfully declined, saying she would prefer to buy a CD. “I don’t think she understood what it was,” he said. “I think she thought I was trying to pick up on her. Not a week later I gave someone a download card and he said, ‘This is sweet, but do you have anything I could buy?'” Tony added that given this economy they never thought people would be so insistent on buying a record instead of getting free music.

Eventually Life in 24 Frames will compile its songs onto a CD. The band hopes to have it completed by the spring or summer of 2010. Until that day though, they are continuing the awkward exchanges in hopes that the cards will catch on. Kris said having a pocketful of cards excites him, as he’s often been tempted to make it rain cards on the audience, but can not justify wasting free downloads.

Life in 24 Frames expressed a focused approach to its writing process. The cards make it a task to have three new songs available every two months. The drummer, who simply goes by Mango, said the band has set a standard that requires discipline.

“There’s nothing worse than when your favorite band takes two years to put out a new album,” Kris said. Life in 24 Frames is constantly writing to maintain fan interest in this digital age where music is available with just a click.

“Some bands can do that,” lead guitarist Tony C. said in reference to taking years between records. “But, obviously with a new band like ourselves, we can’t afford to do that.”

As for their sound, Kris admitted the band has yet to write a song under five minutes. Life in 24 Frames has an experimental sound that builds toward ethereal crescendos.

“None of it is intentional at all,” Kris said. “We never go into the studio with the plan of making a seven-minute epic, but we also don’t stop building the song until everyone is comfortable with their part.”

The band often gets comparisons to Radiohead and Pink Floyd, but the members came together in their appreciation for ’90s indie rock like Built to Spill and Sunny Day Real Estate. Mango was the last member to join. He heard Life in 24 Frames’ first EP and immediately envisioned playing drums for the band.

The bassist Wes said the band hopes to eventually achieve that perfect pop song greatness, referencing The Beatles’ “Happiness Is a Warm Gun” as an example of fitting dozens of great ideas into the three and a half minute pop mold. “They are long songs, but they don’t feel like long songs,” Mango said. “We don’t focus on how long it is. They all have to reach a specific energy.”

Life in 24 Frames said it came to terms with its current sound four months ago. Wes said despite each member having different backgrounds and playing in bands that sound nothing like Life in 24 Frames, they all seemed to be arching toward this moment. “I’m sure we won’t be the same band a year from now,” he said.

Press so far for Life in 24 Frames has the band adopting a bad publicity is still publicity mentality. One show review that amused them in particular was after a last minute scheduling in San Francisco. The reviewer that night trashed the band for having an atmospheric sound that did not translate to the live setting, suggesting that the band be best enjoyed while doing homework, making out or falling asleep. Despite the writer’s intentions, Life in 24 Frames considered the remark a compliment.

From its inception the band has been based around technological savvy. The members all met on Craigslist. Kris joked that whether you’re trying to sell your lawnmower, need a girlfriend for the night or a new drummer, the list will fulfill your needs. Kris has a background in video production. Life in 24 Frames hopes to eventually incorporate video into its recording sessions, but he quickly admitted that filming and playing music at the same time is a difficult task. It did few favors for The Beatles when they attempted to document its Let It Be sessions and Life in 24 Frames are aware of those concerns. “When you’re part of the music writing process there’s absolutely no way you can also from an outside perspective to film it,” he said. “I would like to shoot one of our long drives back from Los Angeles as a music video.”