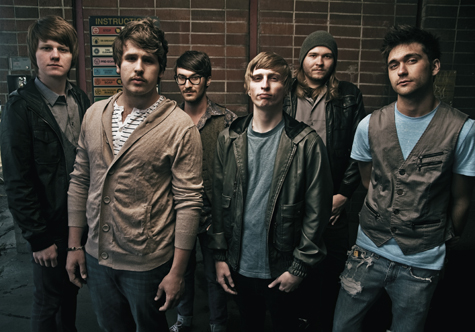 The Pride of Lodi, In Oceans Prepares to Play Sacramento

Before the progressive rock group In Oceans starts band practice, they prepare to embark on a mini journey. All six band members pack up their instruments and meet at a cottage, located in the “boonies” to get the creative juices flowing. While jamming in the small cottage, the band has turned their random guitar strums, bass notes, drumbeats and song lyrics into music that can make anyone want to jump around in a mosh pit.

The Lodi, Calif.-based group is ready to share their five-song EP Earthwalker with music fans everywhere. Submerge caught up with vocalists Stephen Parrish and Matt Miller over the phone after a day of practicing for an upcoming gig.

“We just came together and made this awesome collaboration of magic. We’re really stoked to see what people think about it,” Parrish said.

During the year and a half they’ve been playing music together, the group has created a unique rock sound. “Our music [has] extremely progressed and we got our signature,” Miller said. Each band member (Parrish, Miller, guitarists Ryan Hinch and Jake Knutson, drummer Jesse Reeves and bassist James Garner) played a vital role in making their EP sound stage ready.

“Music-wise we make sure everyone puts in their stance. Everyone has different stuff: funk, mainstream, experimental, we all [have] our different little traits,” Parrish said. “That’s why we’re glad that everything came together in this EP.”

“Everyone brings their own influences,” Miller added. “What we aimed for is something that a lot of people can relate to.”

Even though the music was just released in the beginning of June, the band has already received positive feedback through social networking sites, gaining more than 4,000 likes on their Facebook band page. And if you decide to like them on Facebook, you can expect to see them interacting with almost every fan through status updates, comments and likes. Even though they are gaining strong momentum in the small city of Lodi, their music is spreading across the United States. The Facebook page tells them that they have tons of fans that live in Seattle who are waiting for them to take their show north of their hometown.

“We would like to take a trip up to Seattle and walk around the streets and see if anyone knows us there,” Miller said.

The band also caught the eye of Jonny Craig, lead vocalist for Dance Gavin Dance, after playing the 2010 Battle of the Bands Ernie Ball stage at Warped Tour. “He came up and talked to us afterward and he was pretty impressed with our set, so that was a nice little booster for us,” Parrish said. Both members agree that they hope to play Warped Tour again but are now focused on prepping for upcoming gigs, including a headlining show at the Ace of Spaces in downtown Sacramento.

If you decide to catch their first headlining show in town, be prepared to find yourself jumping around the stage one minute then laughing the next, because these rockers like to act “goofy” on and off stage. They take the music very seriously but seem to go with the flow for everything else that jumps in their way–even when deciding upon their band name, they just chose it as a “safe” name and hoped that it would catch on with people that listened to their tunes. They even joked that they could be called the “Fluffy Farts” as long as it would catch on.

“We paid for a guy to go to Sizzler, and he gave us the rights to the name [In Oceans],” Miller joked. “We just want people to listen to the music really.”

The members of In Oceans are the type of rockers that anyone would want to hang out with and tell a few jokes with after their shows. Especially in their hometown, they chat with fans and eat tacos at the local Jack-in-the-Box. “We sign the receipts,” Miller said. “I’m just kidding, we don’t sign the receipts, but if they want us to sign the receipts we would love to.”

They also like to have fun during their mini road trips to different shows. They play rounds of their own version of a word make-up game, where they improvise and start to rap in the car. “We start to freestyle. It gets insane,” Parrish said. After the band finally arrives at their destination, they have a pre-show ritual of huddling together backstage to get revved up to take the stage. “The whole focus is on playing a good show and keeping the energy up,” Miller said.

According to both vocalists, “fun, crazy, extravaganza and awesomeness” are a few of the things that a member of their audience can expect from one of their live performances. Residents in Stockton might have caught them playing a high-energy show at one of their favorite venues called Empire Theatre, an old movie theater that houses film screenings and live shows. But outside of local venues, they hope to place their music in as many ears as possible. “Hopefully something crazy happens with it because it’s something everyone definitely needs to hear,” Miller said. “We love anyone and everyone that listens to our music. Come out to a show and see; it’s going to be a party.”

In Oceans’ new EP, Earthwalker, was released June 1 and can be purchased on iTunes. If you’d like to keep abreast on the band’s latest happenings, or maybe find out where they’re eating tacos, friend them on Facebook at Facebook.com/inoceansband.