Sacramento’s Incredible Me Take It To the Next Level

Being that it’s still only 2013, calling your debut record Est. 2012 could be construed as hubris, especially from a band with a name like Incredible Me; especially if you’re a band named Incredible Me who signed a record deal before even playing your first show. But after a few listens to the equal parts hard-hitting and soulfully melodic tracks that make up the Sacramento sextet’s first full-length release, and after chatting with charismatic drummer/programmer Jaime Templeton, it becomes clear that Incredible Me don’t have a boastful bone in their bodies. Rather, the band are genuinely aw-shucks happy that their peculiar amalgam of happy, heartfelt and occasionally pretty damn heavy music—set to be unleashed worldwide with the release of Est. 2012 Sept. 17, 2013 through Razor and Tie/Artery Recordings and a pair of nation-crossing tours to go along with it—is allowing them to live the dream of being a full-time, touring rock band.

As one might surmise from the title of their record, Incredible Me was indeed officially formed in 2012. The band members’ collective ties, however, go back through years of friendship and experience in their own various and ill-fated earlier bands. By way of a spotty cell phone connection, Templeton traces Incredible Me’s origins to a casual text message between him and Incredible Me heavy vocalist David Jones. “We’d all been in different bands; my band had moved to Orange County and David, his band had just broken up a few months before. I had never really been in a hardcore band, and I texted David and asked him what he was doing for music,” says Templeton. “I asked him if he wanted to start a band, we thought of a name and started writing lyrics.”

Looking to avoid the pitfalls of their past groups, the members of the nascent Incredible Me were selective about filling out the rest of their lineup. “We wanted to be really serious about it, so we tried to find really good friends that we could have in the band but people who were also really trustworthy people,” says Templeton. After replacing an original guitar player with guitarist Lexie Olsen, the current lineup of Incredible Me—including bassist/vocalist Alex Strobaugh, keyvboardist/vocalist Dillon Jones and guitarist Christian Shroyer—was set, and the band wasted no time writing and demoing more songs. Right away, says Templeton, it was obvious that there was something special about Incredible Me.

“From the beginning, writing our first song and putting it out, it just felt crazy; it was exactly what I wanted. From the moment I started the band with David, things just felt right. It just felt like something would happen, you know?” And something did indeed happen. After demoing with producer Colby Wedgeworth (who also handled the production on Est. 2012), the band attracted the attention of several management companies, on the strength of just two songs, all without having played a live show. After one deal fell through, the band was swooped up by Sacramento-based The Artery Foundation.

“Artery picked us up as management, and we recorded the rest of the album. And then right when the album was done, we got picked up by the record label. And then we thought we’d be waiting for a while, but then we got booked on these two tours. It feels like every month something huge has happened.”

The aforementioned tours, the band’s first forays outside their home state, include a three-week trek in September with a Canadian band, We Butter the Bread with Butter, that stretches from the East Coast back to California, and joining up for the tail end of The Rise Up Tour in October with fellow Artery Foundation bands A Skylit Drive and For All Those Sleeping. “We’re definitely excited to leave. None of us have ever toured,” says Templeton. The tour schedule coincides with the release of Est. 2012 on Sept. 17, 2013 which according to Templeton was originally just supposed to be an EP. But fitting with the band’s accelerated pace, after recording several more songs with producer Wedgeworth for an EP, the band was greenlighted to keep pushing ahead and record a full-fledged album, a process that, in keeping with the band’s equally impressive positive outlook, Templeton describes as “super fun.”

This overwhelmingly upbeat attitude is somewhat belied by the brutal moments that appear on Est. 2012, which features no shortage of screamed vocals, metallic riffs and heavy moments peppered in between melodic passages that recall Panic! at the Disco and other melismatic, vocally driven emo pop bands. But where, exactly, this combination places Incredible Me on the genre spectrum is sort of a stumper, even for the band members themselves. “That’s a hard one for us,” laughs Templeton when asked to classify his band’s music. “If you had to put it together, the whole album, we say post-hardcore, but super pop-y. We do scream, and there’s a few breakdowns on the album, but we try to be pop-y. None of our music is really sad or depressing; we’re not a band who’s dark or eerie. We’re trying to be different, but really we’re just trying to be who we are. We’re bright, happy, fun people.

“We’re all a bunch of clowns,” he continues. “If you were to hang out with my band for a couple of days you would think you’re in the show Jackass. We’re probably the happiest kids around. We try to express that in our music and be super outgoing. We don’t want to be like most bands, where you’re down; all the bands who are like hardcore…” says Templeton in a way that makes it clear that both he, and his bandmates have heard their fair share of criticism for venturing down what is a somewhat well-worn path in the current music landscape. “…Any band who sings and screams is gonna get that. You’ll get haters on YouTube ‘Oh just another generic band.’” But he’s eager for those who may doubt the band’s sincerity—and there are definitely a few—to hear Est. 2012, and see for themselves the band’s sincerity live on one of their upcoming tours.

Also set to coincide with the release of Est. 2012, the band is currently at work on their first music video, the plotline of which Templeton was apparently not at liberty to discuss. “I can say the video is going to be amazing, and crazy,” was all he was willing to disclose. “It’s going to be basically my band in a nutshell. We’re all really crazy people, and we want to express it as much as we can. The video is gonna show us going all out, doing what we do.”

Doing what they do has already gained a loyal following in and around their hometown of Sacramento, but Templeton and the rest of the Incredible Me crew are looking forward to playing for some new faces on tour, road testing a live show that Templeton describes as “energetic. We want to interact with the crowd.” Templeton in particular is known for his own trademark brand of “interaction” with crowds at Incredible Me shows. “I play every show in my underwear,” he admits. “We just try to be ourselves.” And when you’re incredible, being yourself is really all it takes. 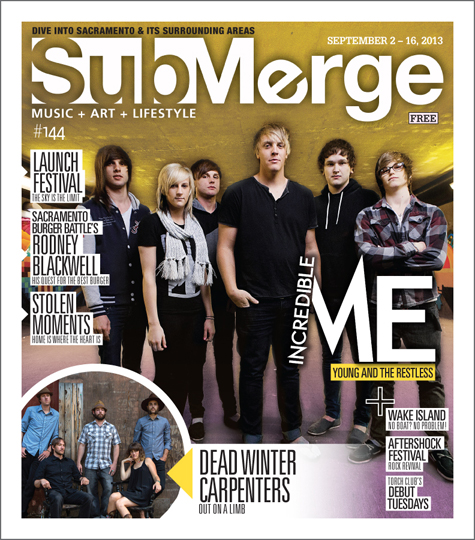