Alexander Graham Bell once said that when one door closes, another opens.

This was precisely the case when Island of Black and White lost its drummer hours before a show and band manager Nawal Alwareeth stepped up, picked up a pair of drumsticks and filled in without missing a beat. No small feat for the fledgling drummer, whose previous drumming experience consisted of banging on table tops and the occasional whack on the bongos.

“I played some percussion, like hand drums…and playing on tables and that kind of thing, but never a drum set,” Alwareeth says. “Chris [Haislet, founding member] said that we had a few hours to practice before the show [in] Humboldt so that’s what we did.”

“She knew all the songs, so it was perfect,” Haislet adds.

A caribbean-drenched fusion of funk, reggae, rock, folk and blues, IBW emerged from the foothills of El Dorado County in 2004 when multi-instrumentalist Haislet—his musical repertoire includes piano, guitar, accordion, melodica, flute—and a friend transformed their jam sessions into a full-fledged band. And, like the music they play, the band’s lineup has evolved; but at its core are Haislet, Alwareeth on drums and vocals, lead guitarist John-John Baguio and Justin Maddux getting down on bass.

While Island of Black and White has been celebrated for its idiosyncratic take on covers of classic funk, blues, rock and soul jams, it’s this love for music that prompted the band to also amass a prodigious catalog of its own original tunes. Tunes they’re now able to share with their large fan base on their debut album, aptly titled IBW.

IBW landed a producer for their debut release after winning the Hard Rock Battle of the Bands round in Tahoe in March, when their performance piqued the interest of veteran producer Douglas Patrick Vaughn—a staple of the Reno, Nev., recording scene for nearly 30 years. After having saved up money from their shows and throwing an album fundraiser in April for recording fees, the band hit the road and trekked up the hill to Reno to lay down the tracks on their first serious foray into the recording booth.

“We met Doug [at the Hard Rock Battle of the Bands], he was the sound guy, and told us he had a studio in Reno. He offered us a good deal at Sierra Sonics Recording Mansion, and they were just super cool people, super friendly and an awesome studio,” Alwareeth says. “We went there a few different times; we kind of started with one song then worked our way up. Then we [went home], saved a little bit more money and went back and finished the whole album. Doug also mixed and mastered the album with us so we spent some more time together and did that.”

The 12-track LP, released on Sept. 20, 2013, emerged out of everyday life experiences and draws heavily on their varied backgrounds—Alwareeth was born in the United States but raised in Egypt and Haislet hails from El Dorado County.

For instance, the album’s closing track, “Egyptian Lullaby,” is a serpentine jam that weaves in and out of tempo while incorporating Haislet’s honeyed vocals. A rattling tambourine slithers in and out of the track as gusts of energetic notes emanate from an accordion, while the lyrics pull inspiration from Alwareeth’s Middle Eastern roots.

“The songs were ready, and had been ready for a while,” Alwareeth says. “We were waiting to find the right person, and the right place, [and] the right time. It was awesome. It was perfect.”

“And the right price,” Haislet adds.

Their live shows are highly improvisational and have been known to run three hours in length, but the duo says that the ebb and flow of each performance relies heavily on the energy and vibe of the crowd.

“I think we have a good time,” Alwareeth says. “We enjoy what we do, and I think everything we do when we get up there [on stage] is on the fly and in the moment and whatever we’re feeling, and whatever the crowd is feeling, it all affects it, I think. We just play and have a good time and all of sudden three hours is over.”

Bringing this off-the-cuff methodology of performance into the recording studio, however, forced the band to focus this freewheeling style into a concise and deliberate vision.

“We definitely had to go about it a different way,” Haislet explains. “When you’re playing a live show, and when you’re recording, you’re kind of painting a picture and both [venues] are different in how you paint that picture. I think the hardest part for us was making the songs shorter.”

“Instead of 10-minute jams we had two [to] three-minute jams,” Alwareeth adds.

As solid contributors to the local music scene in and around Sacramento for nearly a decade, Island of Black and White has established itself as a soulful, musical powerhouse. Having played for the heaving crowd of thousands at the 2012 opening ceremony at Cesar Chavez Park’s Concerts in the Park series, the Hot Lunch concert series at Fremont Park and the Cosmic Family Gathering in Placerville, their music has gained a substantial and loyal following.

The band’s frenetic energy is only matched by its jam-packed tour schedule. With shows stretching up and down the state from Tahoe to Sacramento and as far south as Los Angeles, the quartet has performed at small coffee shops, restaurants and local hot spots like Harlow’s Restaurant and Nightclub.

“We play four shows a week,” Alwareeth explains. “We have some weekly gigs and then some weekend gigs that we do, but this is our quiet time. Summertime is crazy for us.”

“We get through it by getting lots of sleep,” Haislet chuckles.

Looking forward to their upcoming performance, including a local CD release show at the venerable Torch Club on Nov. 29, 2013, Alwareeth and Haislet, who met by chance at a Hacky Sack club meeting at Folsom Lake College, say it’s a privilege to play the music they love full-time. And, while their unrelenting tour schedule can be grueling and downright exhausting at times, you wouldn’t know it from their cheery dispositions and the sheer joy that seems to exude from every pore of their being as they are laying down a righteous jam on stage.

“We’re all about peace, love and music,” Haislet says. “And having fun.”

Island of Black and White’s CD Release show will be at Torch Club (904 15th Street) on Friday, Nov. 29, 2013. To view other upcoming tour dates and purchase the album, visit Islandofblackandwhite.com. 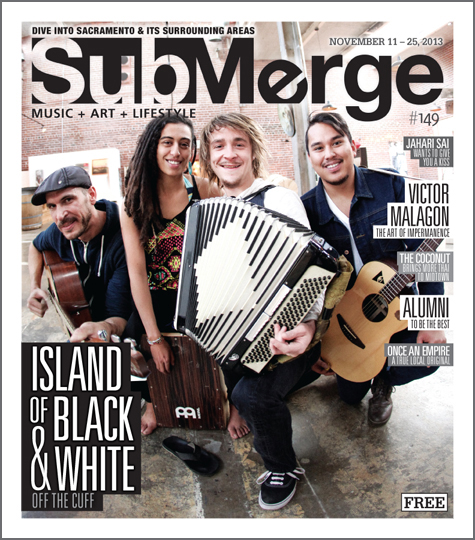