It’s a Karnivool Out There 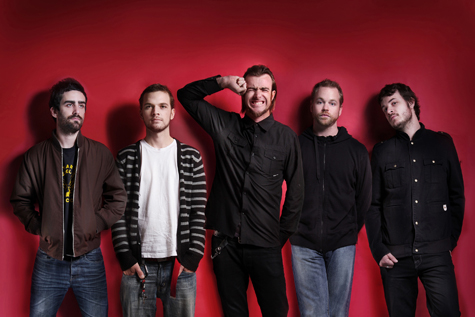 When rock band Karnivool from Perth, Western Australia, released their sophomore album Sound Awake in June 2009, the record skyrocketed to No. 2 on the ARIA (Australian Recording Industry Association) Charts. It sat just behind Black Eyed Peas’ The E.N.D. and solidified Karnivool as one of Australia’s biggest bands. “That was something I don’t think any of us could have really saw coming,” explained lead singer Ian Kenny during a recent phone conversation with Submerge. “I don’t think we’d ever envisioned seeing that on paper—us behind the Black Eyed Peas.” It must have been an odd thing to see, no doubt, considering that Karnivool’s blend of eclectic, progressive hard rock is a far cry from the club-bangin’ single-driven, vocoder-riddled music of Black Eyed Peas.

Karnivool should be used to the recognition, though. After releasing their full-length debut, Themata, in 2005, the band won five Western Australia Music Industry awards (commonly referred to as WAMi awards) in 2007, earning Most Popular Act, Best Hard Rock Act, Most Popular Live Act, Best Male Vocalist and Best Guitarist. “We don’t really give a shit too much about those things,” Kenny said of winning awards, “But the WAMis, that was kind of a big deal for us. It was a bit of a low-key event, but it was, you know, a lot of industry people and public people from our town, so it was a big deal for us.”

Since the release of Sound Awake, Karnivool has been busy touring in support of the new record, having recently completed a few-week-long headlining stint through the United Kingdom and Europe and a massive seven-day festival tour throughout Australia called Big Day Out, where they played to 50,000 people per day in huge stadiums alongside bands like Muse, Mars Volta, Mastodon and many others. When Submerge caught up with Kenny, he and the rest of Karnivool were at the South By Southwest Music Festival in Austin, Texas, where the band was set to perform multiple times. Their shows at SXSW will be followed by an impressive tour through the United States, which will bring them to the Boardwalk on Friday, April 16. It’d be wise not to miss these guys. There’s a reason why they are one of the biggest rock bands in their home country.

It’s probably because people are as hyped on the new record as I am.
You know what, I think they are! It wasn’t on my radar. Honestly I don’t pay too much attention, but people are kind of talking about this record and there were definitely a lot of people waiting to see the band when we got here.

Is it weird to go from sold-out club shows and huge festivals in your home country to smaller clubs here in the States?
I think the whole band actually digs that side of what’s happening right now. We really do. We get to come and sort of earn it again by playing these intimate club shows where people are right in front of you. Some people have never even heard of you, so it’s really cool to see people’s faces; you can gauge their honest reactions.

Your live shows definitely do the recordings justice. It’s too common for such “progressive” bands to disappoint fans in the live setting. Is that something Karnivool strives for, maintaining that polished studio sound even in the live setting?
I think it just comes down to the players, you know? Sometimes we completely fuck things up [laughs]. It comes down to the players. These dudes, all the guys in the band, they are just freak players, so they very rarely, once in a blue moon have a show that isn’t great. They are a bunch of freaks when it comes down to playing, and I think that’s how we pull it off live.

A lot of your songs contain complicated time signatures, but you seem to do it in a way where songs don’t lose their groove. Can you talk a little about being mathy and progressive yet still attainable for most listeners?
I think the thing that we find attractive, when talking about groove, is you want to find something that’s a little bit challenging and a little bit different. You kind of want it to pull and push things around. If you do it right, and that doesn’t mean you have to work that hard at it, but you just have to find that groove. At the end of the day it feels like common time anyway—you still flow to it, you still move to it. I think that’s the exciting thing about that sort of groove, you know?

It must have been pretty crazy to see Sound Awake behind Black Eyed Peas on the charts. Do you listen to Black Eyed Peas?
I could name some of their singles, but not too much, no.

You’re absolutely right, I probably would. In fact, I have. So Australians like to party, I take it, seeing as how much they dig Black Eyed Peas.
Yeah, they do man. We’ve got the weather for it, and with all the good beer, it’s not that hard.

It took what, like four years to get this record out? Why did it take so long?
It just took as long as it was necessary to create something that was quite different and that was going to have the effect on people that it has had. We really circled around the songs and what the idea of the record was going to be for quite some time. By trial and error we executed so many ideas and different parts until we settled upon the right ones that we all felt in our gut, and our heart. It took some time

It sounds like you were letting it progress naturally and not really trying to force it, you know?
Oh absolutely, like we would write some parts for the record and then we’d step back for a couple of months and then really remove ourselves from it so that when we had another approach at it, it’d be completely into new light.

There’s something different about Karnivool’s music to me. It’s almost like a bridge between what a lot of prog-rock bands are doing and what you might hear on the radio. Is that something you’re going for?
I think that’s just what the band does, man. If I think about it, it’s something that I like because it puts us to the left a little. That’s what we’re all about, is sort of finding new space. Sitting up on your own is a good thing.

Do not miss your chance to see this incredible Australian rock band live—you won’t be disappointed. They’ll be at The Boardwalk on Friday, April 16, alongside headliners Fair to Midland and opening acts Something to Burn, Kaleiding Design and A Single Second.