It’s All About the Times 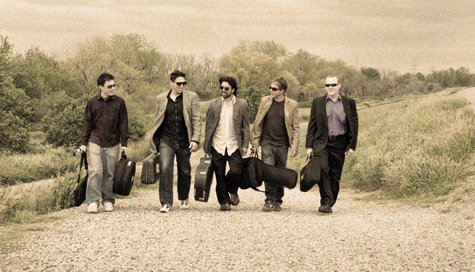 Mark Gonzalez is part of a tight-knit camaraderie of musicians and friends specializing in the earthier side of music. The house parties are typically in a secluded part of Chico, Calif., or his former Midtown home with attendees prone to bare feet and swaying. He’s not in a jam band, but he’s also not denying that his band Chingus won’t deliver a few extended exploratory arrangements in its live set.

Most college-grown start-ups don’t last past graduation, but as it flirts with a decade of band-hood, Chingus carries on by having on and off fits of dedication. All of the members play (or have played) in other bands; outsourcing their talents to Ten Mile Tide, 2me and Dane Drewis’s band, to name a few. There are side projects within the group like The Prize Inside and First Man, a fusion jazz project between drummer Zach Bowden and saxophonist Adam Walter. Gonzalez, the lead guitarist, is a classically trained musician that can play your wedding, bar mitzvah or set up on a stool in your local watering hole. “It helps that everyone has their own job and is well off in their job to a point that we don’t need this band to succeed,” Gonzalez said. “All of us at some point have pulled the ‘I’ll do what I can for now’ card.”

I know what you’re thinking. What’s a “chingus?” I did not hesitate to research its origins, not wanting to make assumptions based on perverted impulses that led me to assume it was a dick joke. Turns out, it is Mexican slang for the male sex organ, but it can also be a colloquial replacement of “do-dad” or “thing-a-ma-bob”–take your pick of silly slang used when you suffer a brain fart and can’t recall an object’s proper name. The third definition, written in September 2003, on urbandictionary.com is “a quality jam band from Chico, Calif.”

Bassist Marcus Schmidt was quick to come clean about the online entry. “I think I have to claim some responsibility for thatÂ one. I believe I searched Chingus then saw the definitions, just missing one important definition. Now whoever said ‘they get lots of bitches,’ I would guess that was our manager at the time, Joe Reynolds…quite the sensationalist.”

In the truest relation to its name, the band is neither a thingy that is never defunct nor a full-time job. Saxophonist Adam Walter feels the Urban Dictionary entry speaks of the band’s quasi-cult status as a well-kept secret in the jam scene of Northern California. After forming during its college years at Chico State, Chingus recorded its debut, Butter and You Like It, in 2004. Graduation led to employment, putting Chingus on an unofficial hiatus. The friends played together when possible, never calling it quits, with Gonzalez playing under the Chingus moniker even if only one or two of its members could make the gig. “I think we got a big-picture view,” Walter said. “The group can function without some pieces, say the horns or keys, now and then, but we usually try and make sure everyone can make it nowadays. As work, other bands and life take people across the country from time to time, I think the musical connection that the group has is strong enough to stand the test of time.”

The artistic respect shared amongst the group is enough to inspire outbursts like “why don’t you get a room,” which the band would most likely do and make a lot of jam noise. As for the classification of “jam-band,” Gonzalez joked that until they make a habit of locking themselves in a room and dropping acid (which will never happen), it’s never going to play a significant role in the band’s identity. “‘What’s this going toward?’ is my hope for any jam that we get into,” he said. “The conversation has to make sense. It can’t just exist because we want to jam. If you listen, there’s always a cue to wrap it up, but that cue doesn’t come until a certain energy point is reached. You’re never trying to rush out quick.”

The propensity to jam comes from a musical conversation that’s been established since the fledgling years of Chingus. There are no self-taught wildcards in Chingus. Each member wields a strong musicianship that lends to the dialogue of the jam. “When [keyboardist] Glenn [Keithly] is ripping some insane solo out it will start off soft and conversational, then will work its way into a full on explosion of sound,” Schmidt said regarding the chemistry. “And it is through understanding Glenn’s mad scientist brain that we all instinctivelyÂ know when a change is coming. That happens with everyone in the band, but with all that said, I try to be the glue.”

Chingus maintains its relevancy like most of its compatriots in the jam scene, by playing for friends who never tire of its music. “Being a Chico band, we lived for playing house parties,” Gonzalez said. “There’s an opportunity for us to play resorts up in Tahoe, but our real exposure still comes from parties in Berkeley, where we’ll sell a couple CDs out of the car.”

Not since college have any of the band mates lived in the same city, which does not seem to bother anyone. “We would hang out together if any of us lived in the same city,” Gonzalez said. “But, that separation makes the times we do get together all the more vital. I love the energy.” With the long-overdue follow-up Whose Chingus near completion, the band is as focused as it’s ever been to embrace these vital coming months. Gonzalez, known as Gonzo to his friends, is planning a move to Columbus, Ohio, in November, which will once again strain the productivity of Chingus. “I think Gonzo is following his heart, and I’m proud of him for that,” Schmidt said. “Who knows where the change will lead him or us. I certainly think we’ll still tour in the spring. It’s just a little bitty plane ride.”

The enigmatic nature of the band makes Whose Chingus a fitting title for its new album. Once again, I know what you’re thinking. No, it’s not a grammatical error; it’s intentionally vague. The actual story behind the title involves baffled state troopers and band paraphernalia, but the unwritten story is how long will Chingus carry on, whether in local infamy or obscurity. No one is comfortable with putting a deadline on Chingus. “As far as I can see, this band will continue to play years from now,” Gonzalez said. His band mates echoed the sentiment that despite the distance they expect to tour in the spring.