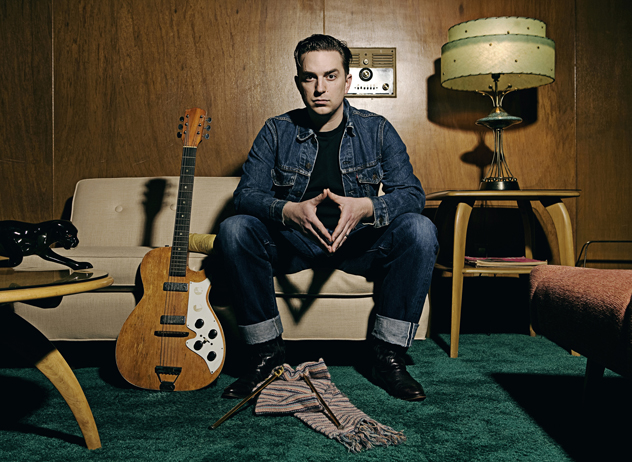 JD McPherson conjures sounds from the past, but with a very modern attitude

Often times simply reading a description of a band or artist doesn’t adequately do the project justice. Upon first listen to Oklahoma-based rocker JD McPherson, it is completely possible to feel as if you clicked the wrong track and accidentally instead played the music of Little Richard or Bill Haley. Only upon a double take can you really begin to notice the modern influence fitted in between the roots.

McPherson was raised in Broken Arrow, Okla. His first album, Signs and Signifiers, debuted on Hi-Style Records in 2010. The album received much critical praise from outlets such as the BBC and Rolling Stone and debuted at the top of Billboard’s Heatseakers chart. The album featured a number of popular singles, including “North Side Gal,” “Fire Bug” and “Your Love (All That I’m Missing).” The first of those singles, “North Side Gal,” also the first song on the album, exemplifies why he is so often compared to the works of the greats from rock ‘n’ roll’s early days, and would fit alongside those songs on an oldies station unnoticed, much like the works of modern artists such as Amy Winehouse, Sharon Jones and the Dap Kings or Fitz and the Tantrums would do the same.

“Well, comparisons are inevitable for everybody,” said McPherson in a phone interview with Submerge. “Any sort of creative production is going to be compared to things before and where things happen to be now.”

Though many reviews tend to describe his sound as rockabilly—a music style popular during the ‘50s and ‘60s that has seen a huge rise in popularity as of late, with many revivalist and even revisionist groups that have gone on to create new sub-genres such as psychobilly and gothabilly—McPherson prefers to consider his roots to stem from a slightly earlier time.

“I mean, basically, we’re trying to continue some sort of tradition, in some way, of American rhythm and blues, and the early rock ‘n’ roll stuff as it was labeled, which is basically the same thing as rhythm and blues, but marketed to teenagers,” he says. “I think our deal was to take these sounds and ideas and try to do something relatively early revisited… ‘Signs and Signifiers’ is a good example—the title track—because…basically everything there is Bo Diddley, but it’s rearranged almost like a funeral march or something. It’s like taking an idea and trying to inject something new into it. That’s what is happening and what will continue to happen. There is something about the pre-1960 idea that caused people to immediately summon up imagery of backyard barbeques and hot rods and that kind of stuff, usually the rock ‘n’ roll I was into doesn’t have anything to do with any of that.”

However, despite the traditional sounds of McPherson’s music, he fully embraces modern music. Back in high school, McPherson spent time in punk bands after growing up listening to the music of the Allman Brothers and Jimi Hendrix and other ‘60s arena rock his siblings would listen to; it wasn’t until he went onto college that he began to transition to more traditional rock ‘n’ roll, according to McPherson.

One area of modernity you can find in McPherson’s music is in recording. Though his sound may be classic, he doesn’t shy away from new technology.

“I’m a complete pragmatist,” said McPherson, “I think it’s foolish not to take advantage of the really great things that digital technology has brought to music making and recording. I really love the sound and atmosphere of old analog equipment, but to ignore the ability to multi-track… I mean, Tom Dowd [producer/engineer] was striving to pioneer multi-tracking stuff the whole time he was at Atlantic. It was like, ‘God, if only we had more tracks to work with,’ so it’s like the best of both worlds, you know what I mean? My problem is when you rely too much on the digital process, where you try to make everything perfect, and you multi-track one thing at a time, it loses something, I think, in translation.”

McPherson, who heads out on a tour soon that will include dates on both the East and West coasts, is partial to tailoring his live show according to the venue in which he is playing because he’s playing venues much larger than he has been used to in the past.

“I’ll tell you [two] of my favorite places to play in the world is the Metro in Chicago and First Avenue in Minneapolis,” said McPherson, “and those are some pretty big clubs. There is something about doing some of this stuff that is really fun in those big rooms. But, man, when there is a chance to do a small club, or an unusual setting like an in-studio radio thing, I really like those too because we are able to play quietly, and the more quietly we can play the better we sound.”

And how does McPherson deal with all that traveling around, and dealing with so many different weather situations, warm, inclement and otherwise, you might ask? He doesn’t seem to be too worried about it: “You just bring layers. I pack pretty light, I usually only bring a couple things to wear, and I’m pretty ripe by the end of the tour, but you learn that the less stuff you bring, the less stuff you lose, and the less stuff you need. That’s why they make Dr. Bronner’s Magic Soap. I’m not endorsed by Dr. Bronner’s Magic Soap, but it really does have 100 uses.”