Act Local • Honing his skills at open mics, Joe Kye has garnered regional recognition for his string pop project, Joseph in the Well 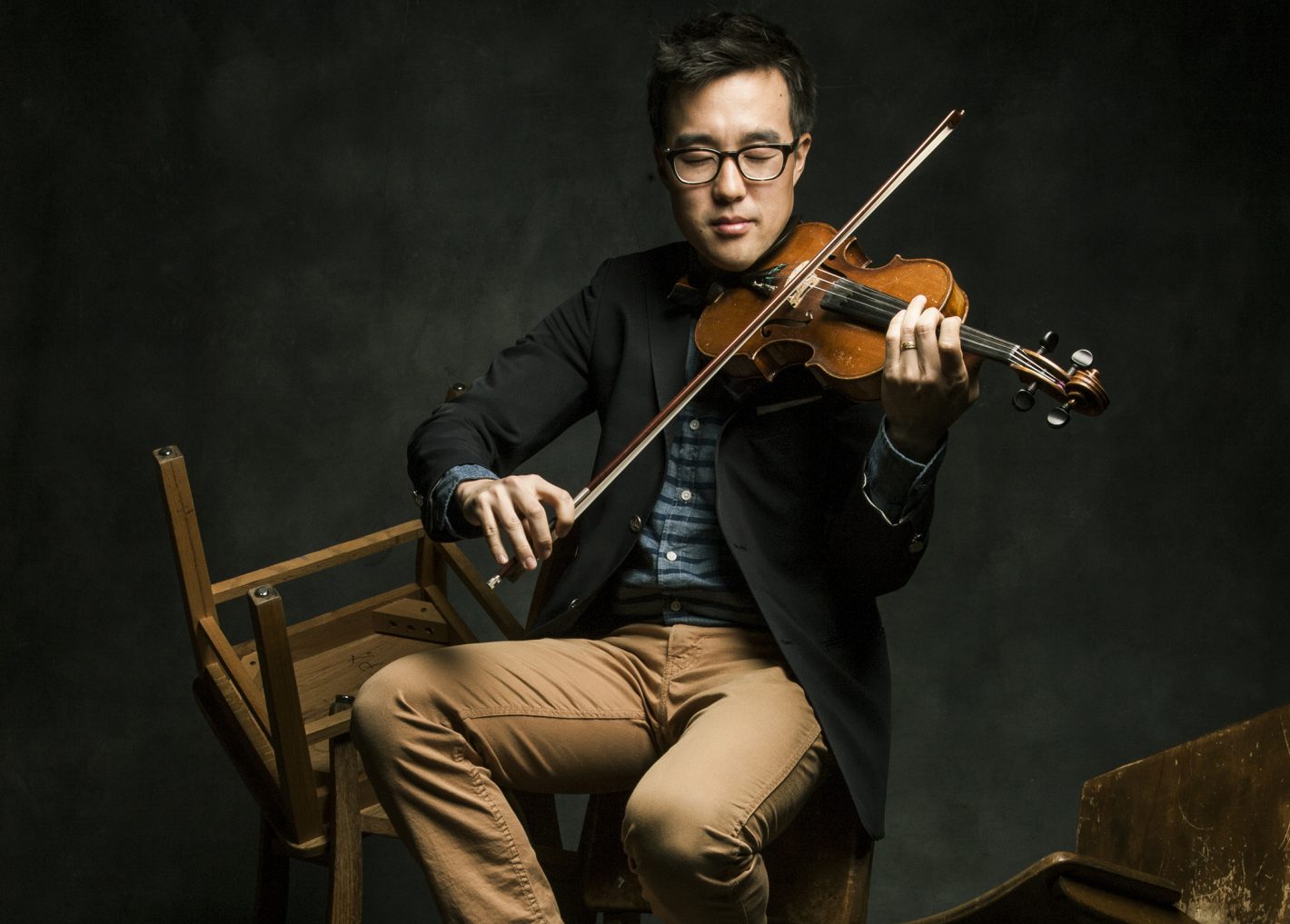 Like so many of us, Sacramento violinist-looper Joe Kye has made mistakes. In fact, he still makes mistakes, even now. And inevitably, he’ll probably mess up again, much like we’re bound to as well.

More in spirit than verbatim, this is the chorus of Kye’s fourth song “11-8” from his upcoming self-titled EP Joseph in the Well, set to drop May 9, 2015.

The optimistically poignant sound and lyrics to “11-8,” including his other five tracks, he says, help communicate a theme he’s been playing back to himself over and over again as of late: universality. As Kye puts it, universality ties into the idea that we are all one; that we’re all human; we all feel joy and pain; we all feel awkward at times, and we all feel awesome at times.

“It’s hope in shared suffering,” Kye says. “It’s like, ‘Oh, we all suffer. We all feel like crap sometimes.’ And then, through that understanding, I think that’s one of the biggest parts of humanity—the fact that we all suffer. So recognizing that, to me at least, brings a sense of hope.”

It was in this mindset of basic human connection and shared suffering that Kye set forth exclusively on his indie string pop music project, Joseph in the Well, in December 2013, after just moving to the Sacramento area six months earlier. He plays alongside local upright bassist Casey Lipka and a “cadre of drummers,” though mainly features Andres Salazar for percussion on the EP.

Kye provides the vocals, but more importantly, he also plays the violin coupled with an old, trusty looping station that he’s had since 2007—his first one, actually.

Here’s how it works in a nutshell: Kye and his band will start to play a tune and at some point he’ll push down on one of the looping station pedals to record a small part of his live violin playing (plucked or bowed). Like clockwork, he’ll push down again and play back that same recording in real time as he continues to play live, thus incorporating it into the performance and repeating the process however many times he likes.

Kye says he switches up which section he’ll loop on any given song, never able to play the same loop exactly twice.

“That’s kind of the beauty of it,” he says. “From both my perspective, it’s like, ‘Oh man, I get to create something new every time I play this song.’ And then from a listener’s standpoint, it’s like, ‘Well, I could go to this show. But this song is going to be different from next week when I hear it played somewhere else.’”

In a way, Kye has created a unique, evergreen quality to his music; it stays fresh with whatever other layers are happening right in front of us. And for such novelty, Sacramento has certainly taken notice.

Only playing with his band for little more than a year now, while also bouncing around and offering up his session violin services to any interested party, Kye was able to take home two Sacramento Area Music Awards (SAMMIES) this year: Outstanding New Artist and Artist of the Year. Yes, even without one Joseph in the Well project completely under his belt yet, Joe Kye and his well dwellers have made melodic waves here in the capital city.

The type of warm reception that he’s gotten, he says, motivates him and lets him know he’s doing something that resonates with people. That is, after all, what he’s searching for: to relate.

Kye’s journey to the SAMMIES started at a homegrown level. He performed at one of Capitol Garage’s open mic nights, a scene he suggests any up-and-coming artist in any town explore when looking for people of different talent levels and dedication levels of artistry. Big or small, they all come together at open mics—something Sacramento has more than enough of to spare as Kye soon came to learn.

He dove right in, embracing Sacramento’s creative arts scene for what it was.

“For me, communities are really important,” Kye says. “And supporting local culture is also really important to me. Of course I have favorite bands and musicians that come from all over the world. But if you care about the diversity of sound in the world, then you have to support local music and local arts.”

Kye says much of his outlook on community culture can be attributed to his own migrant past, which began in South Korea and traversed across the globe through five different elementary schools coast to coast, eventually landing in Seattle where he finished high school and went back East again to attend Yale.

In other words, Kye has moved around a lot. And through all that moving, he learned to accept his surroundings and engage his environment.

It didn’t take long for Kye to welcome Sacramento with open arms and for it to do the same. But unfortunately, he says, many local musicians don’t always do that in a small market like Sacramento.

“I think there’s a tendency to shun the Sacramento music scene,” he says. “And I think what you have to do instead of shunning and then shutting down from is you have to recognize its faults, you have to recognize the perks that it has and then invest yourself. You’re the one living in this community, right? Do you want to have to move to a completely different place every time you want to make money? No. You have to cultivate your local scene in order to create that creative diversity—the artistic diversity of the world—as well as a good life for yourself.

Sticking to his own advice, Kye is certainly getting out there. Having been hard at work recording his EP over the past few months, he has also started a Kickstarter campaign to help subsidize the final touches on the album as well as his national Joseph in the Well tour scheduled for the summer. Aside from stops up and down the West Coast, Kye says he plans to attend the National Association of Music Merchants (NAMM) convention in Nashville, Tennessee, where music vendors from all over the country will be in attendance, including Fishman (amps) and Boss (looping).

Kye is hoping to make some connections there, both artistically and professionally. He says if he can find someone to help promote and book shows for Joseph in the Well while performing at the convention, it’d be like killing two birds with one stone.

In these last days of his Kickstarter campaign, Kye is about $1,000 short of his $7,500 goal as of this writing. He’s confident he’ll meet it, too, saying Kickstarters are most active in the first and last 48 hours of the campaign. And with specially crafted prizes for donors—the best one possibly being a personalized one-minute loop song featuring a donor’s name performed by Kye—it seems likely he’ll succeed and then some.

All of Kye’s efforts are culminating toward an indie string pop project that has now been three years in the making, and one he says he wants to share with as many people who will listen. He says it’s a reflection of the past five years of his life, and how those experiences (many of them shared by others) have manifested into his own distinctive sound of whimsy, melancholy, peace and, ultimately, love.

“I think in a lot ways this EP is me coming to terms with myself. It’s about understanding the common humanity in myself and then sharing what I’ve learned about what connects us to other people. And it’s easily the best form of therapy that I’ve ever had the privilege of having.”

Visit Joekye.com. Joseph in the Well will celebrate the release of their EP on May 9, 2015, at Harlow’s with Rasar (also featured in this issue). Tickets are $10 in advance and can be purchased through Harlows.com. 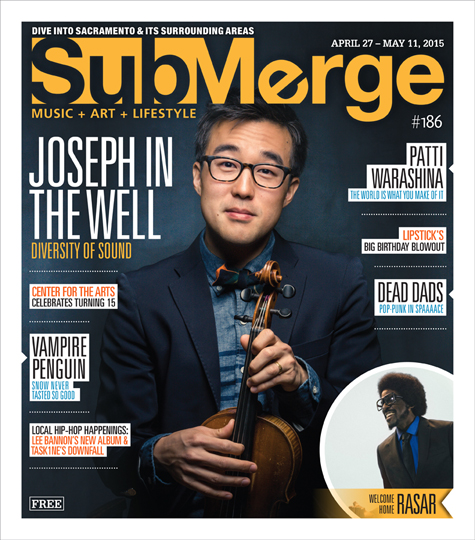