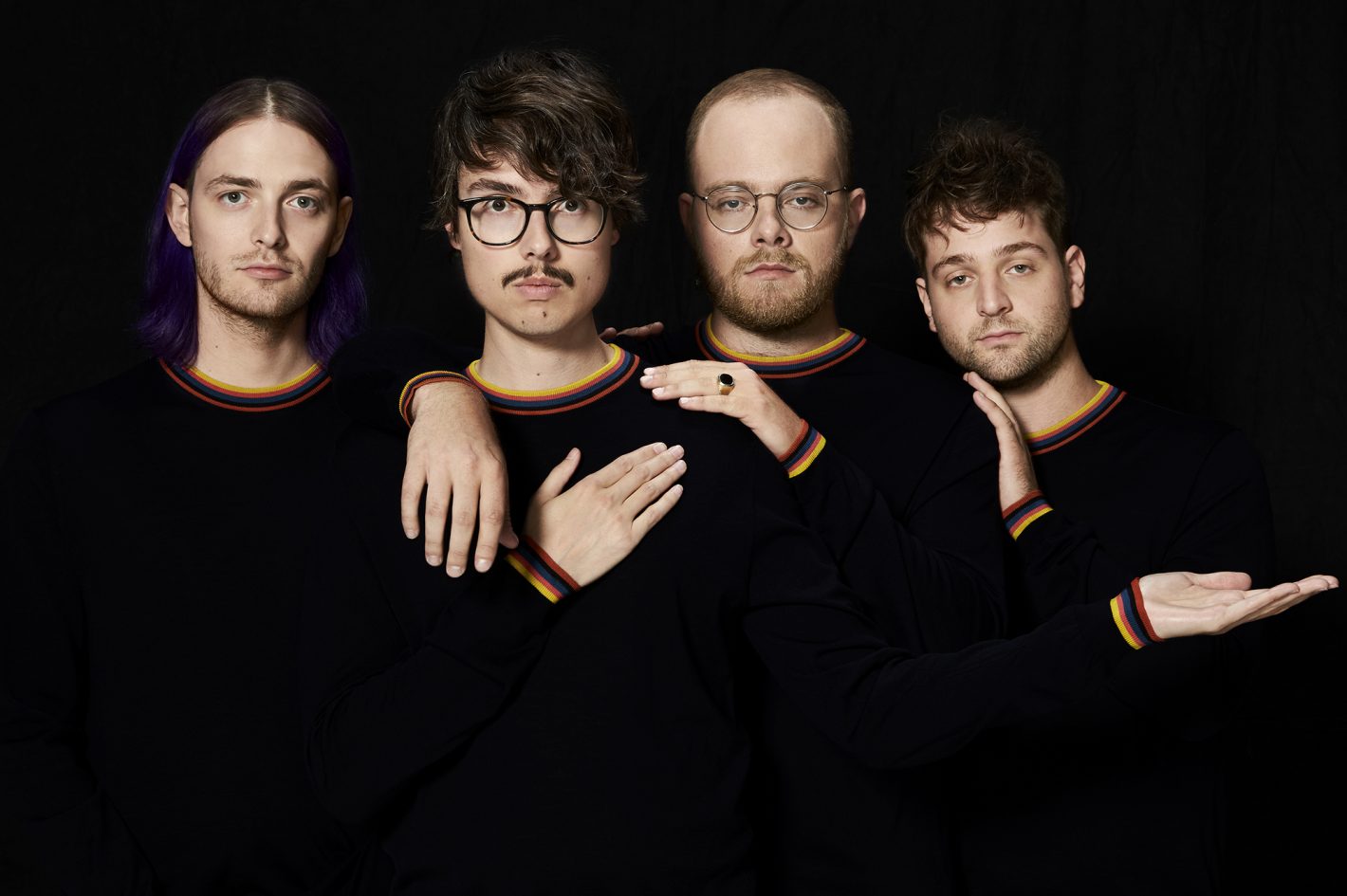 Not everyone gets to live their dream, let alone even name what that dream might be. This was never the case for Daniel Armbruster. From an early age, the Rochester, New York, native knew exactly what he was after: music. Armbruster fronts the pop-rock band Joywave, a five-piece comprised of himself, Sean Donnelly, Joseph Morinelli, Paul Brenner and Benjamin Bailey.

“We all went to high school together—except for our keyboard player Ben—we all grew up together and here we all are a decade plus later still hanging out with our high school friends,” Armbruster said.

Those old friendships feel almost tangible to the listener, especially with the level of ease and humor that tends to come out in the band’s personality, like on their video for “Destruction” as they all fawn over an old mp3 player, or their newest video for “It’s a Trip!” where they slowly age and decay on jet skis.

“I think as people we’re all very lighthearted. We’re definitely not a funny band, but if you hang out with us you’d probably think that,” Armbruster said. “A lot of people are like ‘I’m a serious artist, I can’t ever laugh,’ and it’s ridiculous because it’s just another human emotion.

I think it makes its way into our songs in odd ways, just little moments when it kind of breaks for a second.”

Armbruster and Brenner began playing music together in 2002, and eventually formed Joywave in 2010. Their breakthrough song “Dangerous” peaked the top of the Billboard charts in 2014, followed by their debut full-length, How Do You Feel Now?, which launched the group into touring with The Killers, Bleachers and playing festivals like Coachella and Lollapalooza.

By all accounts the group started living their dream. Then it came time to keep living it, and that’s where things got a little confusing. After extensive touring, the guys each came home with their own level of anxiety on how to move forward.

“The dangling carrot has been the driving force for over half my life now,” Armbruster said. “So many people wake up in the morning and they’re like, ‘What’s my purpose?’ People really struggle with that, and I’ve never struggled with that. I’ve been like I know why I exist and I know what I’m supposed to do today. Everything’s been me hurdling toward this moment, and now that the moment is arrived, there’s a little bit of now what? It feels like beating the video game and then it’s like, alright how many more times do you want to beat the same game? We’re having a blast doing it, but it is a little like Groundhog’s Day sometimes, you know?”

That unknown became the groundwork for their sophomore album, Content, a collection of songs devoted to examining what comes next. The first question is in the album title itself, which is a homograph that requires actually hearing the true title to decipher. “It’s a fun word,” Armbruster said. “CON-tent is extremely overused. It’s kind of the enemy of art. This constant thing where you just produce stuff and you blast it out into the universe and it sits on a playlist alongside a bunch of other things. There’s so much to consume now that it seems like it’s a focus on quantity over quality. I wanted this record to be the opposite of that, I wanted it to be very personal and the best thing that I’ve ever made or been a part of, and the most focused. The idea of the title is that misleading thing where you need another human being to tell you that this record is called con-TENT, not CON-tent. If you are a search engine and you google ‘content,’ it’s not going to know the difference, and that’s kind of the idea. Can the listener tell the difference between those two things? I hope that they can. Is this a record you’re connecting with or is this just part of the noise you’re constantly bombarded by?”

While How Do You Feel Now? was packed with sturdy pop dance hits, Content is juxtaposed with a darker mood. Part of this came from the fact that in the midst of writing, Armbruster was diagnosed with pancreatitis and advised to stop drinking entirely.

“The first record is kind of a collection of songs that happened in this post-college time period when I was DJing a lot to make ends meet, [and] there were a lot of times where I was like, ‘I want to make something that I can play when I’m DJing tonight,’” Armbruster said. “But as soon as I couldn’t drink anymore—I’ve DJed a couple times since then, but DJing sober is the least fun thing in the entire world. So that kind of went by the wayside, and I didn’t really feel like making songs like that. Especially with writing, toward the beginning we were driving city to city in a van and I have motion sickness so I was taking dramamine pretty frequently, which brings me down a bit. It left me in a headspace where I wasn’t feeling like making a bunch of dance songs. A little bit of the record is danceable, but not like last time.”

Songs like “It’s a Trip!” take the looming “now what?” question by the horns, with a vocally distorted hook woven into the chorus: “When you’ve gotten what you want/there’s nothing left to want/you don’t know what to want/just tell me what to want,” or on “Doubt,” where Armbruster questions the alternative of a 9-to-5 lifestyle, building to the bridge where he simply cycles the phrase “Never good enough/never satisfied with nothing.”

It’s still pop, full of driving hooks and Armbruster’s soaring soprano melodies, and songs like the quick interlude “Confidence” add a brief, unfiltered light within the heavier-handed production of the rest of the album. Is it sad? Is it cathartic? For the listener it’s mostly catchy with some digestible depth that helps distinguish it from the rest of the pop field. For Armbruster, it’s not quite figured out.

“It was therapeutic, trying to figure out how I felt about everything,” Armbruster said. “The question I get asked sometimes is, ‘Has the band gone like you expected, did you always think it would work out and you’d be moderately successful?’ And it’s like, kind of, but I didn’t think our band would ever get played on the radio, or that we’d play amphitheaters or anything like that. We’ve achieved a level that is beyond what I expected. Analyzing ‘does this make me happy?’ is a big part of the record. Everyone has goals and is working toward them their whole life, and most people never achieve those things. And here we are, we’re only two official records into the life of the band, and we’re bigger than I thought we’d be. I like to try to figure out the why of things, why do I feel like I need to write songs, and at what point [am I] satisfied with it? I’m still working toward that answer.”