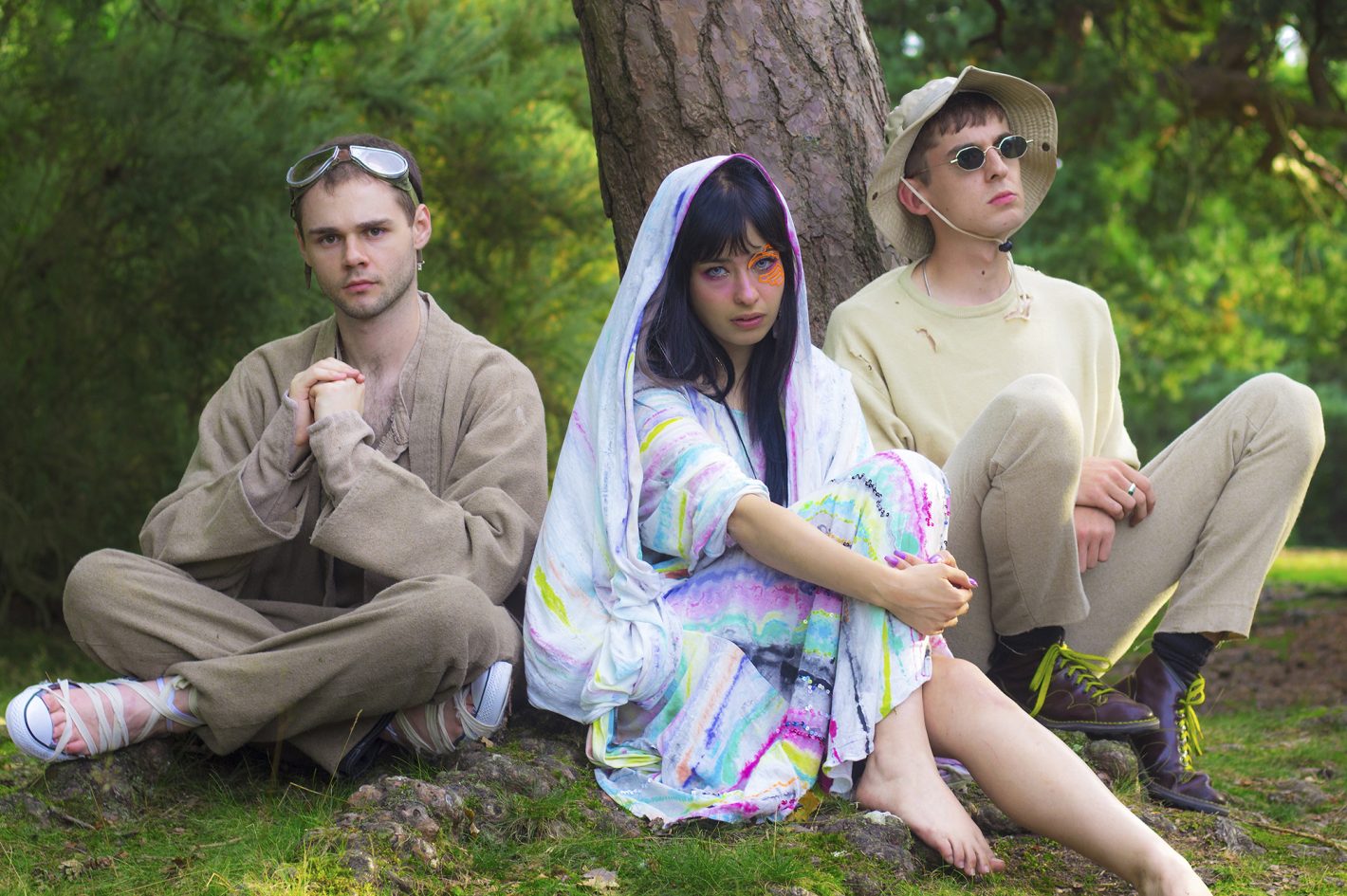 “A pillar of smoke reaches over to strangle the land/We desert all we have as fast as we can.” Lyrical evocations of one of the worst natural disasters in California’s history find a strange home on a new track by a futuristic U.K. pop act best known for a viral hit about flamingos; but “When the Fires Come,” inspired by their encounter with the first ill-boding plumes of the Camp Fire while on tour last year, speaks to the unpredictable nature and far-reaching ambition of Kero Kero Bonito (KKB), a group that uses the ephemeral medium of pop music to host their restless inventive drive.

The trio formed (fittingly, through the internet) in 2011, via a message board for London-based Japanese expatriates. There, childhood friends and music producers Gus Lobban and Jamie Bulled, in pursuing an interest in Japanese hip-hop, connected with Hokkaido-raised Sarah Midori Perry, whose background in visual art and ease of transitioning between Japanese lyrics and English melodies made a good blend with the duo’s freewheeling nature.

KKB’s early releases fizzed with millennial nostalgia, were laced generously with Nintendo 64 samples and fused the best of J-pop hyper-kawaii energy with glossy and playful synth/house production. One of their earliest hits, the aforementioned “Flamingo,” with its clap-along verses and its multiple, infectious hooks, has gained a life of its own online, resurging with a vengeance in 2019 as a TikTok phenomenon. While many of their early songs seem aptly tailored for this Gen-Z hallmark, being just as effective earworms in 20-second snippets as they are at full track length, in recent years, KKB has stretched out their sound to encompass everything from 1990s lo-fi noise pop to shoegaze and wistful chillwave reveries. 2018’s Time ‘n’ Place expanded their palette with additional recording members and the conspicuous presence of guitar.

As this decade comes to a close, KKB is as playful as ever, but perpetually broadening their orbit. Their latest EP, Civilisation I, of which “When the Fires Come” is the centerpiece, is a decidedly left-field work in their oeuvre, even considering their penchant for stylistic recombination. The cover art itself, with its alien hieroglyphics embossed on an oily rainbow sheen, suggests an artifact of primordial origin. Within, the trio reach a more complete synthesis, becoming a single ambient voice while still managing to keep their pop leanings intact; they evoke 1990s ambient techno and even 1980s new age while drawing the lyrical focus toward the environmental, the impressionistic and the apocalyptic. All of this may be a far cry from the bubblegum rush of their debut, but as a move forward, feels entirely organic. Using the plasticity of pop to their advantage, KKB suggest that they can be any place (or time) they want, whether in the embryonic nostalgia of a generation raised at the turn of the millennium, or on the ledge of civilization itself. With the “I” in the EP’s title suggesting the beginning of a cycle, there is much to look forward to in what this group can bring us in the future, and what they can bring from it.

Recently we caught up with Lobban from KKB to discuss the shapeshifting nature of their work, the endless potential pop music can provide and their brief intersection with the NorCal fires of last year.

Your latest EP, Civilization I , came out late last month and was partly inspired by your tour through California last year. What was the experience?
We were on tour in the Fall of 2018 and were driving through North California at the same time as the Camp Fire. We were driving on the interstate near Chico and saw this massive black cloud. We didn’t know what it was. At first we thought it was a weird rain cloud. When we were driving under this thing, we began to notice all these birds flying away from it. Then it came up on the news; we found out from our phones that there was this huge wildfire that had just started. We looked over and actually saw the fire burning. It’d been a pretty weird tour at that point—it had been a great tour, but we’d had some stuff stolen in San Francisco, so there was this generally cursed atmosphere at that point. And then we saw the wildfire; Britain’s pretty mild when it comes to natural disasters, so we’d never seen anything like that before. It was super scary, and it really hit home. You don’t realize how real that stuff is until you see it. That was a huge inspiration for the song “When the Fires Come”; that’s directly from what we saw. With the video for “Fires …” as well, it’s about communicating that, presenting a beautiful song in a disturbing context.

Much of the style and packaging for Civilization I reminds me of late ‘80s/early ‘90s ambient electronica, in the vein of The Orb or Orbital. Were you inspired by this at all?
That’s actually a pretty astute reading. Stuff like Orbital is pretty on point because they would have these environmental references in their track names, their cover art and recording songs in a solar-powered studio. I think the general world of this project was digital ethnomusicology. Like, when you had people like Ryuichi Sakamoto, David Sylvian, Kate Bush using early digital technology to investigate folk music, different kinds of musical traditions and incorporate non-pop music into pop music. It falls into that idea of using old technology to do something that hasn’t been done before. Much of Civilization I utilizes ‘80s synths. It’s almost a kind of “junk” musicology. There’s something quite affirming about doing that in the context of the time we live in, and feeling like everything could just go away, and we wouldn’t be able to use laptops, they would just be junk, basically. So the idea is mixing up all this music in a way that’s “post,” you know, after everything has ended. And also getting in touch with our musical heritage—getting in touch with drones, like the sound of the Scottish bagpipes, and the sort of modal folk music from Britain and Europe.

You’ve name-dropped everything from dancehall to J-pop and Indonesian techno as inspirations for your music. How do you go about finding new sounds?
I think the key is to keep your ears open. Sometimes you’ll hear something in a film that’s interesting, or on the radio; your friend might play you something; you might find a bizarre record in a charity shop that isn’t of any line that you recognize, and you find out that there’s a whole story behind it.

It’s really easy to forget that just because something’s not on the internet, that doesn’t mean it doesn’t exist. That’s especially noticeable in places like Indonesia, where they’re now digitizing a bunch of local pop music. I’m sure we’ll get to a point where it’s all just there. But if you go to an Indonesian record shop, you’ll find stuff that there would be no other way for you to find unless you were in that exact place.

Even with Japan, the language barrier is such that even though much of the music is documented online, it’s not very accessible unless you speak Japanese. It’s actually quite interesting watching how certain Japanese artists have had a big renaissance in the western indie-pop world, people like Tatsuro Yamashita. People who are arguably even better, like Yumi Matsutoya, don’t have quite the same impact abroad because those artists are quite strict about having their music go online. But yeah, I’d say any channel for finding things is good.

I’ve considered lately that pop music is the most radical of genres simply because of its voracious appetite, its ability to take in any influence. What does pop music mean to you, and what possibilities does it present to you?
I think pop music is the most beautiful form, because it relies on the tension of our modern condition, the tension between self-expression and groupthink, or art versus commerce. The reason why pop music is so great is because you can fold in whatever you want—it can be a vector for anything. The most beautiful pop music is music that everybody loves, but is still somehow original, or somehow defines the zeitgeist for everybody, while meaning something to you specifically.

In this day and age, when everything is defined by the tension between how we feel about ourselves and having to fit into society, nothing embodies that like pop music, and that’s why it’s the best.

In that spirit, what influences might you incorporate in the future, or have incorporated already, that no one outside the band would expect?
Well, I studied music in university, so string quartets, Stockhausen, John Cage. It might sound lofty and unrealistic, but genuinely a lot of the approach of contemporary music and art music, especially at the start, went into KKB. The cutting-edge or radical approach of art music challenges you to think like that. We take a lot of that music very seriously and care a lot about it. And I think a lot of people think we just listen to vaporwave or something.

Although you haven’t yet been together for 10 years, in some sense, you’re closing out your first decade together, with 2020 fast approaching. What changes have you witnessed in this time musically, and what’s your hope for the 2020s?
What changed the most was the mode of dissemination, I think. When KKB started, we were basically a blog band. Basically, our career started because we got posted on blogs like Gorilla vs Bear, and those platforms are still going strong—I love them. But you didn’t have Spotify playlist music then … along with the composition of music for Spotify. That’s all par for the course now. For the time being, I’d say that the TikTok model is probably the most cutting edge one in a big way. I think that pop music today isn’t really written by music producers and songwriters, but by comedians and videographers, and I don’t mean that in a disrespectful way, it’s actually really interesting …

As for our hopes, I know that there will always be people in pop music that are very expressive and push technology forward. There’s a lot to look forward to there, and that’s what we’re gonna do, no matter what happens.

Catch Kero Kero Bonito live at Holy Diver (1517 21st St., Sacramento) on Tuesday, Oct. 29, 2019, at 7 p.m. Also performing will be Negative Gemini. Tickets for this all-ages show are $20, but have sold out online as of this writing. For more info, go to Holydiversac.com or for ticketing inquiries, email eventbrite@holydiversac.com.