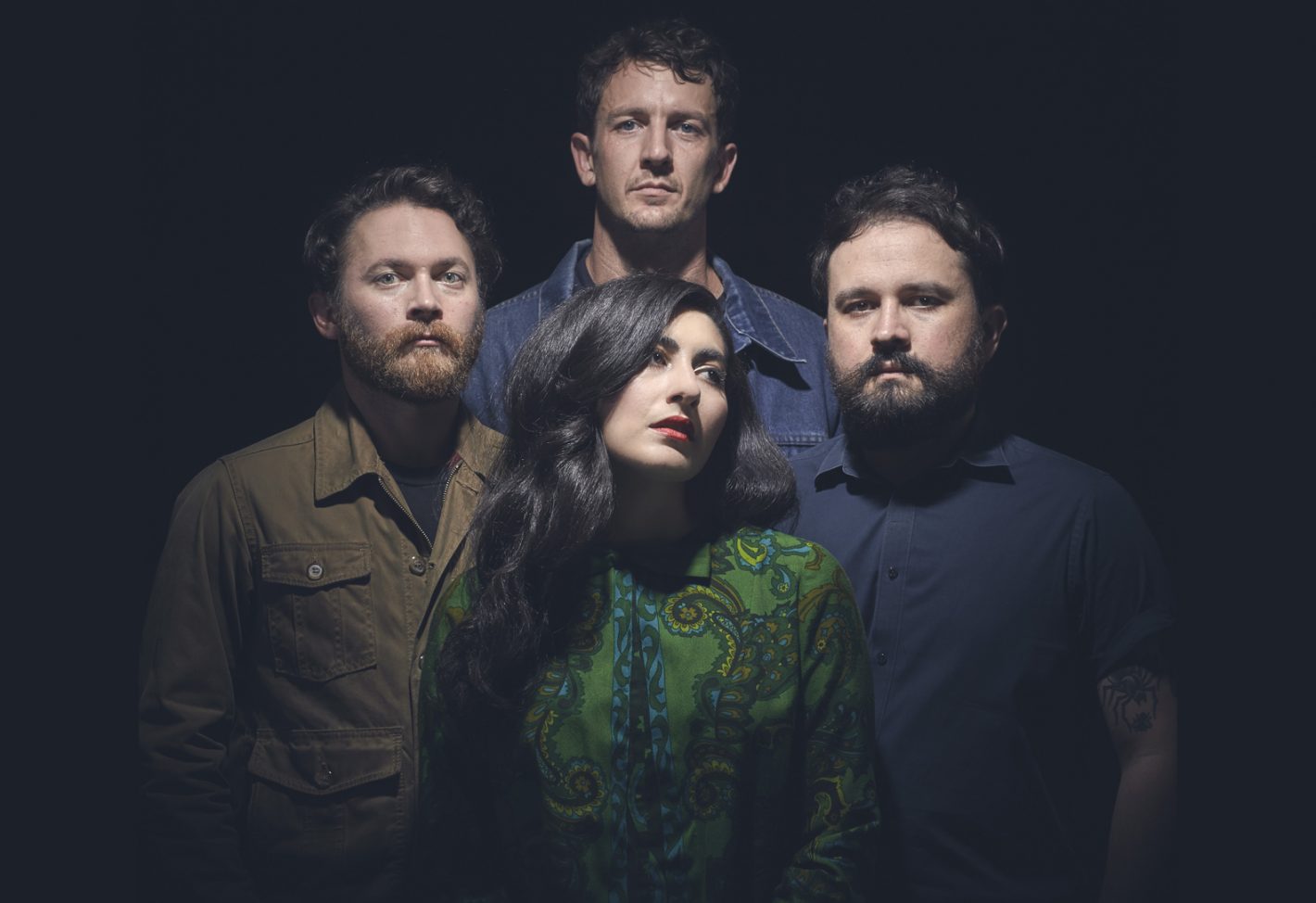 There can be little doubt that San Francisco’s King Woman has already carved a niche for itself in the realm of heavy, dark music.

I had the chance to see them at Starlite in 2016. Coming up the stairs of Starlite, you could only see red light shining onto the wall to the right of the bar. A heavy fog filled the room as the band smashed through their set. Kristina Esfandiari, the band’s enigmatic frontwoman, was out on the floor, disappearing from view amongst the crowd and smoke intermittently.

The band started as a solo project for Esfandiari, while she was active in other bands like Whirr and Miserable. Now, King Woman is set to release Created in the Image of Suffering, the band’s first full-length album, and its first release on Relapse Records, due out in February. It was recorded at the Atomic Garden with Jack Shirley (Wreck and Reference, Deafheaven).

Their first recording, the EP Doubt, was released on the Bay Area label The Flenser, and was recorded at Earth Tone Studios with Sacramento hitman Pat Hills.

Since then, the band has gone through some lineup changes, and some tours, and are about to go out on tour again in support of the new record.

Created in the Image of Suffering brings a more straight-forward feel to the band’s songwriting and even recording approach. The result is a sound that captures more of a live feel for the band.

One track that stands out is the first single “Utopia.” The main riff lunges forward in a slow churn, you can almost feel anxiety waiting between snare hits. Esfandiari’s haunting and powerful delivery commands its space over the riff.

The entire album is at times churning and slow, giving way to lush, cavernous texture.

In the empty rec hall at another one of my part-time jobs, I set up an android tablet with a recording app so that I could record my phone call with Esfandiari and her bandmates Joey Raygoza (drums), Colin Gallagher (guitar) and Peter Arensdorf (bass).

Was this album something that had just come about or a project that may have been on the back-burner for a while?
Colin Gallagher: We had been writing songs. Like when the EP came out, we had some that were a similar style, and Kristina had a lot of conceptual lyrics. We met up with Pete and it really sealed the deal, the songs we sort of wanted to write came together.

When was the last time you were all in Sacramento together?
Kristina Esfandiari: We did a small tour with CHRCH, and we played at Starlite, and before that we were at Press Club.

Was there a sound or feeling you wanted to capture with Created in the Image of Suffering?
Peter Arensdorf: We tried to capture more of a live sound, because for the longest time people that listened to our record, many people came up to me and were like, “Whoa, now I understand why your live performance is so powerful,” or “It’s so different.” Because none of the songs are played the same live, just because there’s a lot of layers that we put on the record. I mean, we’re still trying to find the sound that we want to hone in on, so I think in this record, at least how I feel, this is more of a depiction of how we sound live.

KE: When I am writing, I’m thinking about how it will translate live. I think it’s our strong point is our live performance.

I listened to Sabotage by Black Sabbath a lot. There’s so many themes running throughout the record, it’s hard to say there’s any one thing. The songs are kind of a collection of like a year and a half, where we were kind of like, shit, we should probably put out a record, you know? And we came to this point where we were like OK we have enough songs, let’s just go in the studio with Jack. It’s just like a collection of songs we had been sitting on for a while. I can say for myself I’d been listening to the Black Sabbath album a lot and Frank Ocean.
CG: I made it a point to not listen to anything actually, because I didn’t want that to influence the way the songs sounded, I don’t know if this sounds cheesy but I just immersed myself in the songs because I wanted to explore different drum patterns and different things to make the songs as unique as possible, because I purposely didn’t want people to say like, “Oh, that drum beat sounds like this band, or that groove sounds like this band”

Kristina is there music from your childhood that you weren’t allowed to listening to with your strict upbringing?
KE: I had to sneak music, I wasn’t allowed to listen to anything that wasn’t Christian. The music I had access to was very sterile and shitty, and like the edgiest Christian record I had was fucking P.O.D.

The one with “Southtown” on it?
KE: Yeah. My dad was a rocker, growing up, so he played a lot of Neil Young, and the Stones. Neil Young really shaped me growing up. It’s weird because I wasn’t allowed to listen to quote unquote secular music growing up but I would sit on the couch and my dad would play all the bad ass rock ‘n’ roll records. But yeah I had to sneak a lot of the music I listened to.

I remember I listened to a lot of No Doubt—Tragic Kingdom and Return of Saturn—and I liked Jagged Little Pill by Alanis Morissette, because she was super angry, and I wasn’t really allowed to express that side of myself. So I would just listen to that record and really relate to it, but I was never allowed to listen to it. I would do it when my mom went to work or something and just blast it on the stereo system they bought me for Christmas.

I went to Best Buy with my dad, and got some of the first CDs I ever bought — Elliott Smith’s XO, Hail to the Thief by Radiohead, Good Mourning by Alkaline Trio and some shit like that.

If you could set up a dream tour who would it be with?
Joey Raygoza: My ideal one would be where every single one of our friends is on the tour whether they would be with us or playing, because I feel like those are the ones that matter the most. Those are the ones you always have to look back on. There’s only been like a couple tours where I’ve gone and I didn’t feel fully immersed or not really having the best time, but every time I’ve gone on a tour with people I already knew, or people that I got to know pretty quickly because of the shows, those always felt like my favorite tours. I can’t really think of any other ones unless it was like Slayer or something.

CG: Oh I don’t know I feel like we’ve already got to play with some of the bands I’d really like to play with. Boris maybe? Yeah that’d be great.

KE: Yeah that’d be sick. I’d like an old man dad-rock band. I want to tour with like Bruce Springsteen or Stevie Nicks, or The Replacements or something. That’d be sick.

King Woman will be touring extensively this year, with two album-release shows. The first will be in Oakland on Feb. 17, and another at Starlite Lounge, right here in Sacramento (1517 21st St.) on Feb. 24 with VRTRA and Declension. Tickets are $10 in advance and $12 at the door. The show starts at 8 p.m. and is 21-and-over only.