When you think of a band, you might not think that visuals would be the first thing to pop into your head. But subconsciously, maybe. Musical presentation has significantly changed shape with the birth of online media, and suddenly artists are building social media empires with aesthetics to match the sound. Some find this a burden (they’re aural, not visual!), but others take to it, use it to their advantage. This seems to be the case for the duo, Kisses. The Los Angeles couple/group Jesse Kivel and Zinzi Edmundson have a clear, L.A.-centric image, packed with visuals. If you’ve visited any of their websites, you’ll notice minimal information given regarding the band’s background.

“I just think personal band website bios are cheesy,” Jesse Kivel said. “You’re trying to tell your fans to like you instead of letting them buy into what you’re doing.”

In lieu of a bio is the one-line banner, “Always leave a little to chance.” The cheeky saying comes from Kivel having lunch with a friend, and was said off-handedly about giving a tuna melt a try at a dive-y restaurant and ending up finding a great spot.

“I thought it was a silly but profound thing,” Kivel said. “That’s essentially what our plan would want to be, is to make music that’s inspiring but also has a lightheartedness to it.”

“The intention lyrically is to make L.A. seem iconic, not in the Hollywood cheesy way but in an almost historic way,” Kivel said. “I think L.A. doesn’t get credit as being a historic city since California is known as the place with no history.

L.A. is Hollywood and fake and whatever, but if you look closely there’s a lot of interesting things that have been around for a long time in the area, and that’s the iconography we’re working with.”

Kisses materialized out of songs Kivel was writing that weren’t fitting the mold of his initial project, Princeton.

“It wasn’t like I brought them there, and we were like, “These aren’t good.’ I was just writing a bunch of tracks,” Kivel said.

He took them to his girlfriend, Edmundson (keyboards), and the two turned them into a duo project dubbed Kisses. They quickly drummed up some online curiosity, which went from buzz to recognition with their debut album, Heart of the Nightlife. The LP focused on the glimmering post-nightlife haze of Palm Springs, Calif. The result was a clean, glittery feeling album; upbeat lilts with droning undertones. Kivel’s vocals move slowly over fluttering drums, electronic pulses and keyboard accents, tying together a nice pop package with heavy ‘80s influence.

When it came time to make the next record, there were a few slight detours.

“I’d originally written a bunch of songs that were going to be the next record, but they just sounded like the 2.0 version of the first record,” Kivel said. “It seemed like it was going to be the same old thing,” Kivel also had another batch of songs in the works for yet another potential group, but “I was realizing they could be adapting,” he said. 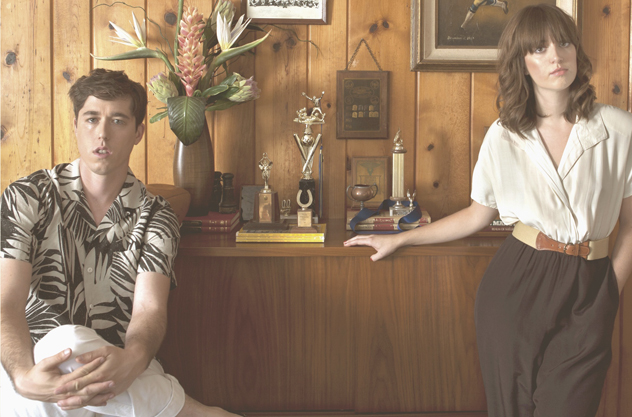 Once the songs were settled, recording began, but the process ended up spanning more than a year and a half.

The first record was recorded in Kivel’s garage in a quick month, but Kids in L.A. was a little more piecemeal. The skeleton was initially recorded over a month’s process in another garage space, but the production wasn’t right, so the next year was spent reshaping the songs when time could be found.

“That was just frustrating as an artist to sit around and wait for your record to be done, knowing you’re writing these new songs and moving on,” Kivel said.

From patience and time came their newest, Kids in L.A., a natural evolvement and transition from the debut’s focus. Rather than the endless summer appeal, Kids in L.A. focuses on the abandoned winter feel of L.A., glamour coated in a little rust.

As a result of that, there’s a sort of hollowness to the tracks, intermittently filled by Kivel’s quicker vocal melodies and some brush of electric guitar, but an overall more stark feeling. It still maintains the same spirit of Kisses—pop structures mixed with late ‘80s freestyle (head nod to Lisa Lisa and Debbie Deb)—but rather than feeling that juxtaposition of nightlife energy and winding down all at once, it comes off more as cruising through deserted beaches with knocked over umbrellas, portraying “that off-season thought, ” Kivel said.

Most of the band’s attention went into the production of the record, but lyrically the album has some themed focus as well. As mentioned earlier, the intention is to highlight the L.A. setting and history, but the songs also follow the path of a few high school kids, all fictionalized.

“The characters aren’t based in any reality—although, I mean they’re just caricatures of people and events that have taken place in my life, there’s not any one thing I can go, ‘OK, this happened to me in 11th grade,” Kivel said.

As for upcoming plans, the two will be zig-zagging through the continents on tour, starting with a West Coast string of dates, heading to New York for L Magazine’s Northside Festival, then heading overseas to the UK and Japan. Keep an eye out, and of course, an ear as well.