The life of a touring musician can be grueling. You write and write and write some more, then you record an album and get it mixed, mastered and pressed. After all that, if you have any money left, you release said album and if all goes well and all your ducks are in a row, the next logical step is to leave normal life behind and hop in the van (or if you’re lucky, a bus or motorhome) and tour the shit out of the album. It’s a process that’s not cheap and not easy.

Kurt Travis, co-vocalist of Sacramento-based post-hardcore outfit A Lot Like Birds (and former co-vocalist of fellow Sacramento-based band Dance Gavin Dance) knows the drill all too well. “A Lot Like Birds doesn’t give me a lot of downtime, but when they do, I’m kind of thankful for it because then I can go forward with some solo stuff,” Travis recently told Submerge during an interview in his new downtown Sacramento loft. “ALLB was going to do this European tour and it ended up falling through. Immediately I was like, OK, I have this amount of time, lets bang out a record and lets go out on tour and sell it.”

Travis enlisted the help of longtime friend and former bandmate Zachary Garren (they played in DGD together years ago). Garren, who now plays in the instrumental band Strawberry Girls and lives in Salinas, Calif., would come up to Sacramento for a few days at a time and the two would write songs and work on the album’s pre-production. They were also sending song ideas back and forth even when not in the same town. Before they knew it, they were sitting on a full-length’s worth of solid material, had a label ready to release it (Blue Swan Records, a new label that is run by Dance Gavin Dance’s Will Swan) and a full-on tour booked to support the record, which will be titled Everything Is Beautiful and will be released sometime later in May.

As of press time, Travis and Garren had only released one song off of Everything Is Beautiful, a pop-y, upbeat ditty called “Brain Lord.” At last check, it had 16,031 views on YouTube after only being uploaded a week prior. With no plans to release any other material from the album before its full release, Submerge was lucky enough to get a private listening party where Garren and Travis allowed us to hear rough, unmixed, unmastered versions of seven of the 12 songs that will appear on the album. What we heard was not some half-assed solo effort from a lead singer who just wants to put something out for the fuck of it. What we heard was a focused, mature, surprisingly pop-friendly album that touches on surf-rock with lo-fi garage vibes, glittering and noodly lead guitar lines, lush layers of vocal harmonies with sprinkles of synth-y goodness. It’s light and accessible (we only heard one part with aggressive vocals, and it was more of a shout than a scream) without being overly cheesy. It’s an artsy pop album, if you will, and it’ll more than likely have you moving and grooving.

Check out an excerpt of our conversation and mark your calendars for Kurt Travis’ tour kick-off show at Luigi’s on Wednesday, May 14, 2014.

EDITOR’S UPDATE: As of May 13, 2014, Kurt Travis’ Everything Is Beautiful was available for streaming here. 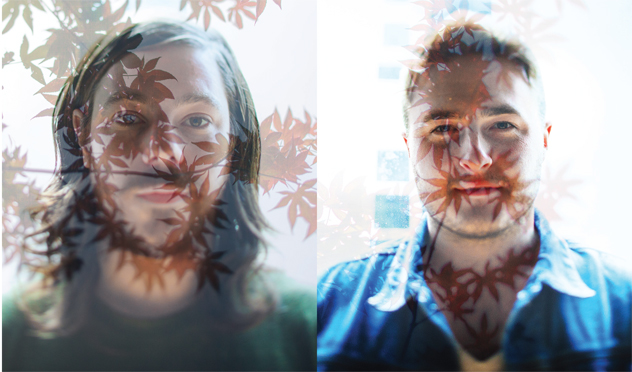 Tell me a little bit about the album title, Everything Is Beautiful. What’s the reasoning or motivation behind calling it that?
Kurt Travis: With every release I kind of have a theme, because it’s fun. It’s fun to have a certain message. My first [album theme] being this little girl I knew, she was just learning how to speak, and I related to her because it was kind of like my first solo effort and the songs were very primitive. So it just kind of had this theme, that’s why I called it Wha Happen. She kept asking me that. For this [album theme], I’ve been under this impression lately. I’m very happy. I’m very creative. I’m doing really, really good. I’m having an amazing time with A Lot Like Birds and I’m having an amazing time writing my own stuff with Zach. The theme is Everything Is Beautiful because, well, it is. Just appreciating things that aren’t necessarily beautiful, but you watch them, and they change and your perspective on them becomes different. Kind of that sort of thing like, what is beauty, or what is art? I could get really crazy on you. We could talk about what is beauty and what isn’t beauty, but it would be wrong. Everything is beauty.

Would you say this is the most pop friendly thing you’ve ever done?
Zachary Garren: It’s definitely the poppiest.
KT: It’s the poppiest freaking thing I’ve ever done in my whole life, and you know what’s really weird is I was really trying not to. With this record I was trying to go for that like new wave sound…and it came out super pop-y and funky and groovy.

How does your approach to writing lyrics for your solo material differ from when you’re writing with A Lot Like Birds?
KT: They’re very, very different. Nowadays I’ve been writing very conceptually, not as song-to-song-to-song. But kind of an atmosphere or a story within that song, and kind of vicariously really, which is weird, because that’s something that I really don’t do. I usually write from life and sorrow and just, you know, therapeutically healing myself. I don’t really do that anymore. I guess I don’t really have the need to. I don’t have to be extremely worried about what’s going to happen next. That’s totally kept me up at night in younger years when it comes to music.

Your work with your other bands no doubt keeps you guys busy: Constant touring, writing, recording, doing press, etc. Why not just use your down time to relax? What is it that drives you to want to create music even during your little bit of time off?
KT: I think Zach and I will totally say the same thing. It almost feels the opposite, you know what I mean? If you’re constantly creating and you’re doing different genres and such, I feel like sometimes the more opposite the genre, the more I’m just secretly influenced by it because it’s completely different.
ZG: I just like to create a lot. Some days I’ll do way more than other days…
KT: When I tell him to write a song, he’s got like six the next day. By the time I’m done listening to those, he’s got two more. And then when we get to the studio he’s like, oh man, I got to relearn these. It’s like that show Heroes where the guy blacks out and just does some amazing shit.
ZG: Being a musician is different than working a 9-to-5 sort of job. It’s not easy, but it’s different. It’s still fun to a degree.
KT: Even if I didn’t write a record this last month and immediately go back out on tour, I probably would have worked an odd job for a month and did it that way. But instead, I made a record, and I invested money in the T-shirts I’m going to sell on tour, stuff like that.

So in a way, it’s kind of like an “in between job” that just happened to be creating a record?
KT: Exactly. When Joe [Arrington, drummer for ALLB and who also plays on Everything Is Beautiful] is home, he plays with like four different cover bands and makes way more money… I guess there is this mentality of like, work your fucking ass off, because we are privileged enough to be able to play music.
ZG: Creating music in a way is also kind of downtime. If you’re a musician, what do you do in your downtime from your job? You’re probably doing music. We’re just kind of having extra fun. We do it because we like it and want to try to keep getting better and hopefully making better stuff than we have in the past.
KT: The more you make music and go out on tour, the more you’re going to gain fans. At this point, I’ve been doing it for almost 10 years, I might as well just keep on. Kids still appreciate it and still buy the previous stuff and the new stuff. They’re still buying it, so…
ZG: It’s cool to switch it up, too, because this new album isn’t like anything we’ve done in a long time. It’s the most accessible kind of thing. There’s no screaming so it’s a more mature version of some of our past stuff.

With this album being so much more pop friendly than most of your guys’ past stuff, is it crazy to think that this could very well become the most popular shit you’ve ever done?
KT: It very well could be, although you never know.
ZG: It has the potential, but there are so many little things.
KT: I mean, my manager is Eric Rushing and he’s pretty freaking connected. I did my best. A lot of the times I’ve shown him stuff, and he’s like, “Dude this is fucking incredible, what am I supposed to do with this? This is the best song I could never do anything about.” So this record will definitely be like, “Here you go man, this is probably the most accessible thing you can get out of me, what can we do with it now?” And I think Eric can do a lot.
ZG: And it’s still creative music too, which is cool. This is going to be like our parents’ favorite record.

On the same day that you dropped the first single off your album, Jonny Craig and Tilian Pearson, two other vocalists with past or present DGD ties, also dropped new songs from their new projects. Was that just a big coincidence, or was that meticulously planned out by your management or something like that?
ZG: Not planned at all.
KT: Swear to god. Not planned. We wanted to put it out a couple days earlier, but it didn’t work out. That’s what happens.

Don’t you think in a weird way it might have worked to everyone’s advantage?
KT: Oh we loved it! We milked the shit out of it. It was crazy awesome cross promotion. I talked to Tilian, too. He was totally super happy about it, just like, “Oh my gosh this is going to boost everything!”

One question that I feel a lot of people are curious about is what your relationship is like with all those guys? Jonny, Tilian, all the other DGD guys… I feel like people think there is all this drama. Is there?
KT: No, no. Jonny was at the recent DGD show at Assembly, and I was at that show with Zach. I see Jonny at Ace or Assembly or whatever. I talked to Tilian after the show, shit like that, we were all talking and hanging out after the show. Everybody is just doing their thing. There’s a lot of shit you can check out from all of us, there’s just a big resume from all of us, and that’s really cool.

See Kurt Travis, Zachary Garren and their newly formed backing band play songs off of Everything Is Beautiful at one of the few remaining shows at Luigi’s on Wednesday, May 14, 2014. Also performing will be Hotel Books and So Much Light. Show starts at 7 p.m. and all ages are welcome. 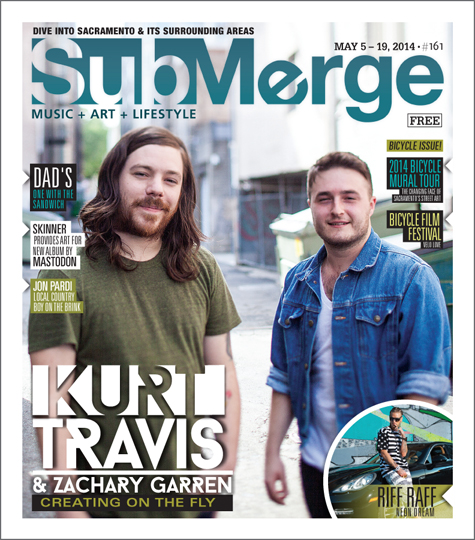