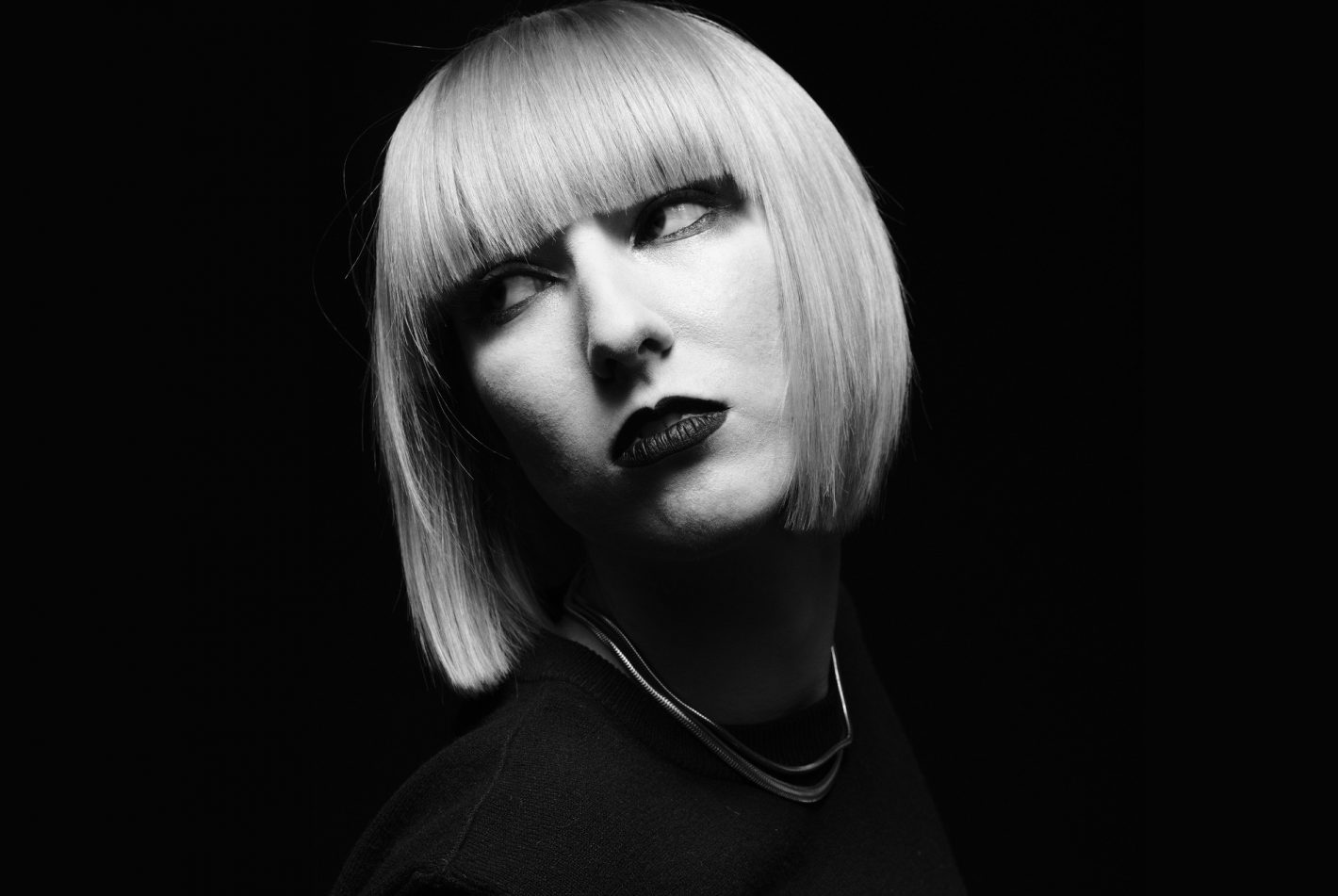 She glowers at the controls of a mixer in a dimly lit music venue, microphone poised like a dagger in her hands over a faintly spreading smile. Dressed in garters and a quicksilver bob-cut, for a moment she becomes a mannequin, and in the void of motion, the roar of smoldering static in the burrow-like room becomes even more oppressive. Then she lets loose a scream into the ether, equal parts triumph and agony, soaring over the wall of noise from nearby speakers like a cannon bursting over the din of a battle, or, more aptly, a banshee spiraling upward from the bottomless pit. One moment she descends from the stage toward a carefully displayed pack of ice, chainsaw in hand. In the next, she gleefully slaughters it, producing a fresh eruption of audio abrasion while the general ambient threat level soars. Her true name is Kylie Jackson, but tonight she is Ustam, her chosen nom de guerre for her noise shows and appearances at Norcal Noisefest. On other nights, she spins vinyl as Lady Grey, plundering decades of darkwave, goth-rock and other sinister synth releases for her DJ night at B-Side, dubbed Catch the Wave.

Elsewhere, Jackson’s paintings and assorted installations (some of which were displayed at this year’s Art Street) stand as sigils of her favored aesthetic, abstract portents of inky monochrome eliciting a Rorschachian response. Over the harsh X-ray afterglow or billows of darkling spindrift, the mind works overtime to fill in the resultant void of color. One’s secret fears and latent hallucinatory input are drawn forth like water from a well to collaborate in the message being forged on canvas.

But what do these stark stylings mean to the artist herself? In a word, as she tells me, “happiness.”

Jackson’s mission to keep alive a spirit of late 1970s/early 1980s industrial experimentalism is fueled by a tireless joy for creative toil, a fiery enthusiasm for the coldest of aesthetics. As industrious as her music, melding the harsh and sleek, moving from one of her crafts to the next with bracing speed, this dive-bar art-star/gallery exemplar continues to spread her brand of elegant madness throughout the environs. 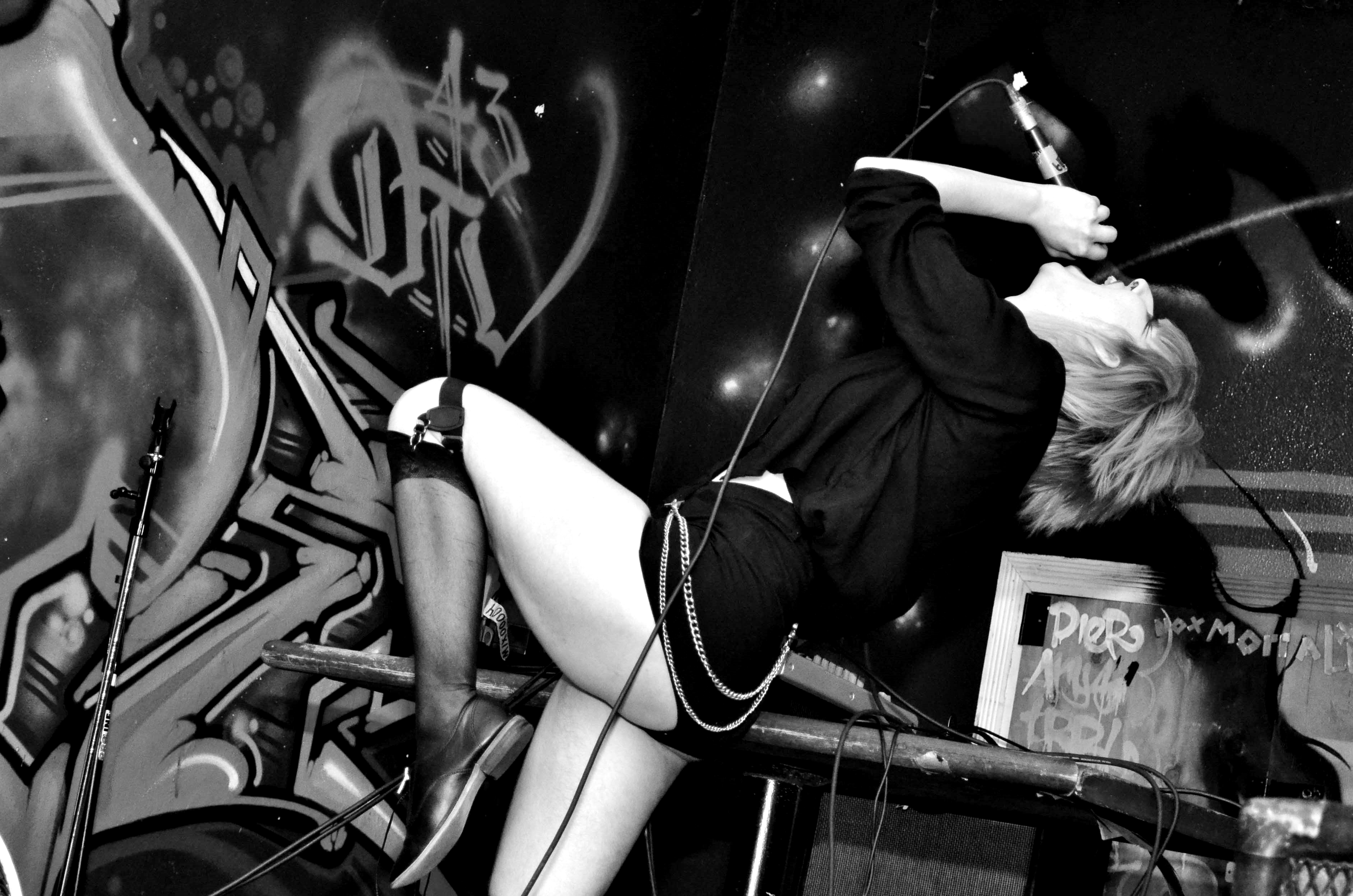 Where does the name Ustam come from?
I thought I saw something with the word “Ustam” on it or something close to it that my mind ended up deciphering while I was walking around in New York, and I wrote it down before I could forget. I thought it would be an awesome name for my solo project, and it sounded like another language so I looked it up and it’s the singular possessive form of the Turkish work “usta,” which means “master,” and I do play up the dominating factor when I do perform as Ustam and tend to wear leather and maintain a strong demeanor. I’m more confident now to “match” myself to my art, and I think that enhances it, in a way, not only for others but for me, too, to be the whole package deal. You are your art even when your art isn’t present.

What goes into your performance, idea-wise? What’s your approach?
Throughout my noise career, I’ve used my screaming vocals as a staple, and I like it because it gives an element of fear, and I like to scare people because it’s fun. I’d rather scare someone than bore someone. I’m super inspired by Pharmakon—she’s on Sacred Bones Records. She got me into screaming; I’ll scream along to her in my car. I thought, if this little lady can do it, I can, too. I wanted to be a vocalist, but I’ve always been super self-conscious about my voice and the way it sounds, so I figured, what better way to mask it than through screaming? It gives me a little more confidence to be up front on the stage. It’s just being on stage that I really enjoy. Noise is awesome, scaring people is awesome, and everything industrial from the ‘70s through ‘80s to now has inspired that. I want to keep that spirit alive. As a person of the younger generation, I didn’t have the chance to see these awesome acts live before, so I think that performing in these genres helps keeps that spirit alive—keeping it alive for the younger people who never saw SPK [Australian industrial/noise band] live. Many of these industrial acts weren’t even documented in the first place. 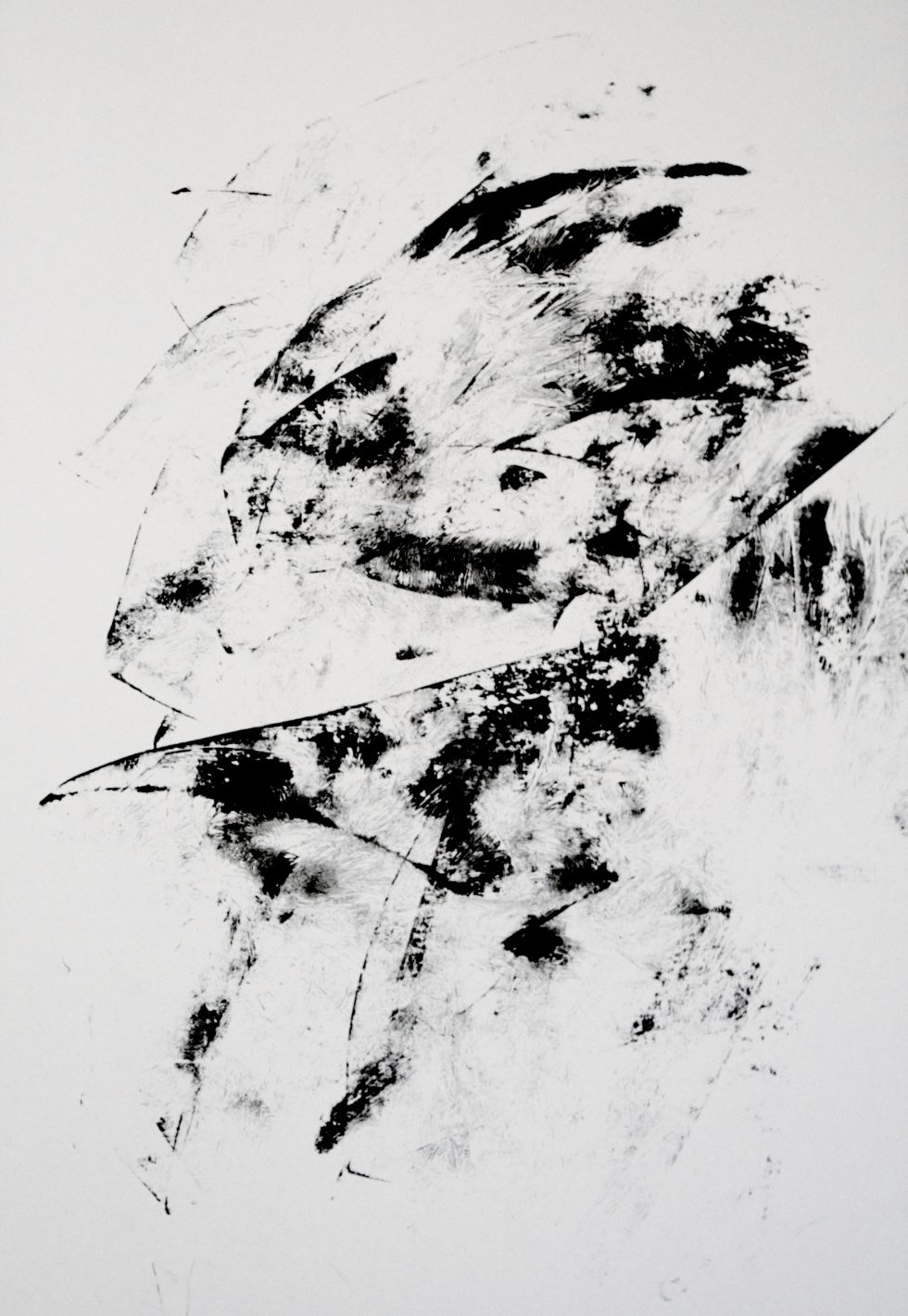 “Surviving The Plague” | Ink on Paper

How would you describe your visual art?
I primarily stick to ink and ink-based works. It’s super abstract. Nothing is supposed to look like anything, but everything ends up looking like something—like a Rorschach. That’s exactly how I like to present it to people, some people will ask, “What does this mean? What is this about?” You have to find out for yourself. I know what it looks like to me, but I’m not going to tell you because then that’s all you’ll see. If you go in blank, you’ll pick it out for yourself. Sometimes people will buy a piece of mine and hang it a different way—and that’s awesome, because that’s how they see it. Once it’s in your hands, it’s your story, your piece.

Do you see your audio and visual practices as part of a unified genre?
All of those industrial acts from the late ‘70s and early ‘80s have the same type of feel and vibe.

If you look at the album art for noise/experimental artists, you’ll see that it’s all fairly similar. So in that vein, I like to keep the bleak, Xerox art aesthetic, and that monochromatic style in my visual art.

If you’re into the aesthetic, and the noise, you’ll have an amazing, positive experience, but if you’re not into it, you’ll have a completely negative experience. And I don’t want there to be an in-between. I want you to either love it or hate it. You have to be on either end of an extreme. If I end up somewhere in the middle, then I feel like I’ve done something wrong.

What would be the ideal venue if you could run one?
There’d be a lot of neon—not in the obnoxious way, but in the mall sort of situation, like the under lighting. There’d be just a lot of different rooms—a big room, a hall, all these things, each room would be different. Have you seen Suspiria [1977 horror film by Italian director Dario Argento], where each room is themed? I like the super ‘80s aesthetics as well as super modern, contemporary look of just black and white, super clean, super sleek. It would have to have both of those elements. Band-wise, I would have a bunch of people from the ‘80s, along with people who are new in that vein. People from Europe. I would totally bring [in] She Past Away or Lust for Youth. The fantasy part would be that I had enough money to pay them, even if people who didn’t know about them didn’t come to the show.

What feeling does the music create for you, and what feeling do you want to inspire in others?
I feel happiness. Even if it’s something of the darker nature, I feel happy. Even if it’s a dark subject, even if it’s literally black and white. If I’m walking around in a museum, and I see just one piece on white canvas with some black paint, that’s probably the piece that’ll draw me in the most. Even if it’s the most simple, most easy to do, I don’t care. Something about sleek, modern black and white contemporary art just makes me so happy and overjoyed. But I’m very happy creating my own version of it, and I’m having a fun time with it. This is what I want to do forever—there’s no end in sight. 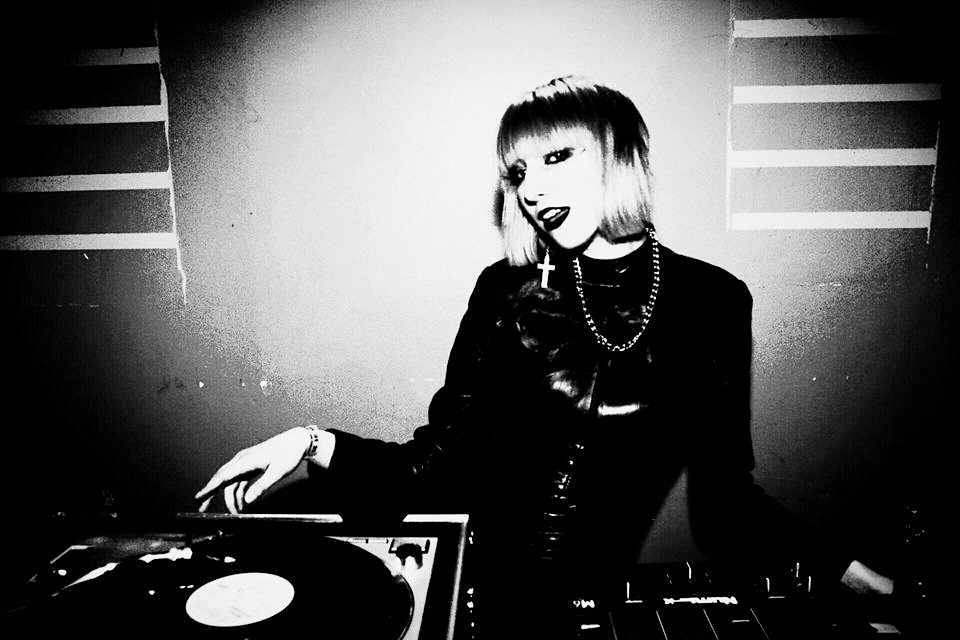 You can catch Kylie Jackson’s next DJ night as Lady Grey at B-Side on Oct. 21 from 9 p.m. to closing. Jackson (as Ustam) will be one of more than 50 artists performing at this year’s Norcal Noisefest XXI, which will take place at Luna’s Cafe (1414 16th St., Sacramento) and Cafe Colonial/The Colony (3520 Stockton Blvd., Sacramento) from Oct. 6–8, 2017. For more info, go to Norcalnoisefest.com, where you can also purchase advance tickets.