Who’s the baddest of them all?

With a new album and national tour, it’s a year of firsts for L.A. Witch

If there had been a Wicked Witch of the South, she’d have been less a villain and more the cat’s meow, flying around on her broom over the 405 while all the suckers went Falling Down-Michael Douglas on their ways to work. She’d have been hip and popular with style and grace, listened to righteous music, and maybe even had a band of her own in which each member donned a pointy hat and green face paint. But for all the striped socks and wicker flair, she’d have had a fight on her hands these days for queen necromancer with L.A. Witch, a Los Angeles-based three-piece with seemingly all the potions necessary to cast a bewildering spell across California and wherever else four wheels might take them. An all-female power trio, L.A. Witch is a rock ‘n’ roll brew of stoned swagger—midtempo punk soaked in reverb and bleach, with just a touch of trashy alt-’90s thrown in for good measure (their forthcoming single, “Drive Your Car,” is evidence of just that). With shared musical roots dating back to high school band Pow Wow, members Sade (guitar, vocals), Irita (bass, organ) and Ellie (drums) are now in their mid-20s, and poised to take the next step: their first national tour forthcoming, as well as their first LP. Ahead of their stop at Sacramento’s finest rock dive, the Press Club, on March 24, 2015, Submerge caught up with L.A. Witch to discuss the state of the band, gender roles and the baddest band van on the West Coast. 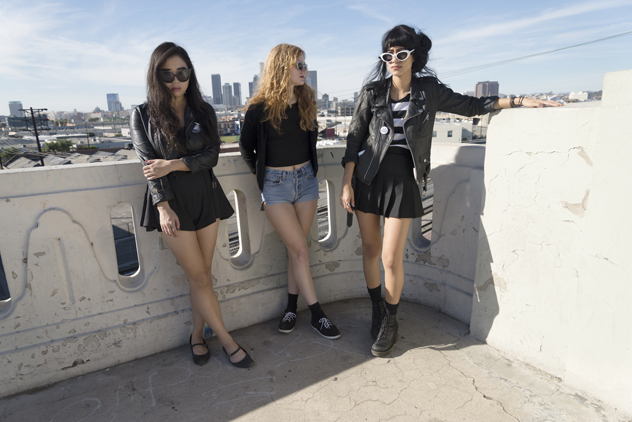 So “Drive Your Car” and “Ain’t Comin’ Home” sound great. What do you have going for the debut full-length? Who are you working with?
Sade: Actually we’re going into the studio… We had planned to release a 7-inch but that sorta fell through, so we’re kinda trying to figure out that situation as we work on our full-length. [We’re working with] Joel Jerome, he plays with Babies on Acid and does a lot of the recording for a lot of the Lolipop Records bands. Joel’s awesome, and he’s the one who recorded our first EP, so I think we’re gonna go that same route again.

Does that mean you might wind up working with Lolipop in terms of label support?
Sade: There’s been talk about it, but it’s still up in the air.

I’m looking at your upcoming national tour, and you’re definitely playing at hip clubs. Considering you’re gonna be recording soon, and you might have some label support, it seems like you’re ready to break out a bit. How does the prospect of that make you feel?
Irita: It’s pretty exciting. We’ve never done this before and we never went into this with any sort of expectations. Having these opportunities has just sorta been a dream come true, I guess, not to sound cheesy.

Any dates in particular you’re looking forward to?
Irita: Austin Psych Fest is gonna be amazing. The lineup this year is incredible: Jesus and Mary Chain, Spiritualized, 13th Floor Elevators—they just added them.

Will you be seeing any parts of the country for the first time?
Irita: Definitely. We’ve pretty much never left the West Coast. Even going to Vancouver was crazy for us. It’ll be an experience.

Obviously L.A. Witch is all female, and because of the ways gender roles have unfolded in rock ‘n’ roll over time, people kinda take notice when a band is comprised exclusively of women. Is there good attention and bad attention that comes with that, dealing with your average douchebag dudes and so forth? Is there a spectrum that affects you depending on what type of shows you’re playing?
Irita: It’s funny ‘cause we’ve had the experience where we’ve met sound guys that aren’t so nice, but then after we play they come up and are like, “Oh man, I really get what you guys are doing.” But otherwise, not really. We do get lumped in with a bunch of other girl bands that we don’t sound anything like.

Do you see a trend with more female-driven bands as opposed to it being a boys club?
Irita: I think music historically has been a boys club, as far as rock ‘n’ roll goes. Chicks go to those shows. And I think it’s a really interesting shift; I feel like there’s a lot of girls that are seeing it’s possible that you can do it and you can be a part of it instead of just being a spectator, and I think that’s really cool.

When dudes go to start bands, I’ve never heard anybody say, “Well I’m gonna make sure it’s just guys in this group.” Have you ever been in the position where you’re like, “Yeah, we could have this dude play with us, but we kinda like the dynamic of just having women in the band.”
Sade: [Laughs] We thought about it, and it’s not necessarily so much about keeping it all girls, it’s more about who clicks with us, and we’re really content as of right now. Obviously a fourth member would be awesome to add to the wall of sound, but I guess this is what works right now. We’re not opposed to having a guy in the band, or anything. But we have taken notice from traveling together [that] it is easier [to] relate to each other just being female.
Irita: And it’s more fun, I feel like. You’re hanging out with your girlfriends, going to different places and playing shows. It’s like Thelma and Louise [laughs].

What kind of rig do you guys take out on tour?
Sade: Oh my God. So I borrowed my dad’s ‘94 Astro Van, and he’d bought it used and it used to be a city van, so it has stickers on it and it’s bright yellow and used to have a router on top. So when we travel, people always think that we’re a taxi. People pull up next to us and ask us for directions, or I pull up to the venue to load gear and [they] run up and are like, “Oh the taxi’s here!” That’s kinda what we’re working with right now. We love Astro Van.

Your chance to catch L.A. Witch and their Astro Van is at Press Club (2030 P Street, Sacramento) on Tuesday, March 24, 2015, with Monster Treasure, Death Party at the Beach and Vasas. Show starts at 8 p.m. and is $8 in advance. For more info, visit Lawitches.bandcamp.com.