Lara Price landed in San Francisco on a flight from Vietnam when she was just a couple of weeks old. She celebrates her birthday on March 18, but only because the doctor who examined her upon arrival to the United States estimated that to be her birth date. That was April 8.

Fast-forward a few decades and Price is now a hard-working blues musician who fronts multiple, popular Northern California bands and has a stable of albums under her belt. This includes her latest, I Mean Business, being celebrated with an album release show scheduled for Nov. 14 at Sacramento’s Torch Club.

Her life probably would have looked a whole lot different had she not been plucked out of Vietnam in 1975 as part of Operation Babylift, a U.S.-led initiative that flew thousands of supposedly orphaned babies out of the war-ravaged country and put them up for adoption in America.

“We have no birth date or information about who our parents are,” said Price in a phone conversation with Submerge. “They set up this giant area at the Presidio in San Francisco and started checking in babies and sending us to our parents.”

Price’s adoptive parents had begun looking into adoption years before Operation Babylift. They thought they were adopting an Amerasian baby—a child born of one Asian parent and one American parent, in this case, the offspring of a U.S. soldier and a Vietnamese woman. For most of Price’s life, she thought she was Amerasian, and only learned semi-recently that both of her birth parents were actually Vietnamese.

“The whole journey is ever-evolving,” she said. “I didn’t do the DNA test before because I was afraid to find out.”

She traveled to Vietnam five years ago and has made a point to explore and understand her past, connecting with other now-grown babies who share her unique circumstances.

Price’s adoptive father was in the Air Force, so the family moved every few years. That’s how she ended up in London when she was 6 years old, where she took her first piano lesson. Her adoptive mother enrolled her in the course with a man named Howard Jones, who went on to create 15 Top-40 singles in the ‘80s and ‘90s and is now considered to be a defining figure in the history of synth pop music.

“I just happened to take lessons from this guy who turned out to be a rock star later in life,” she said. “When I moved back to the States he was on MTV.”

By age 12, Price was starting to put her voice to work. Her mom recognized her natural ability and enrolled her in voice lessons to help hone her talents. And with that, the singing never stopped. Price has gone on to build a life and a career on that voice, which can dip into everything from rock and reggae to many genres of blues music, which is where she packs her hardest punch.

Because she’s a woman of Vietnamese descent singing soulful blues music, she’s often asked about her path into music. Many people ask if she grew up in church.

The Blues & the Bay

As Price entered adulthood, she settled on her own in the Bay Area with the intention of making music her life. It was the height of the original dot-com boom and she found the place stacked with millionaires. She wondered if a life built on a hodgepodge of music gigs was really the smartest choice.

“But when you have a passion for something and you feel like it’s your calling, you can’t just become an engineer,” she said. “I didn’t plan on the blues. I started going to jam sessions and it chose me.”

In the years that ensued, she has toured and released albums, making a name for herself as a mainstay in the blues community throughout Northern California. She now plays in a number of distinct bands, all of which offer a different experience and require her to flex different muscles as a vocalist and as a performer. These include: The Lara Price Blues Revue, a seven-piece blues band with the singers of the duo Sweet Nectar on background vocals; Militia of Love, a reggae band; Lara Unplugged, an acoustic duo for intimate settings; and The Lara Price Band, a blues band.

“It’s also a paycheck,” said Price. “A lot of people bag on it, but what’s wrong with making people happy and taking home a check?” 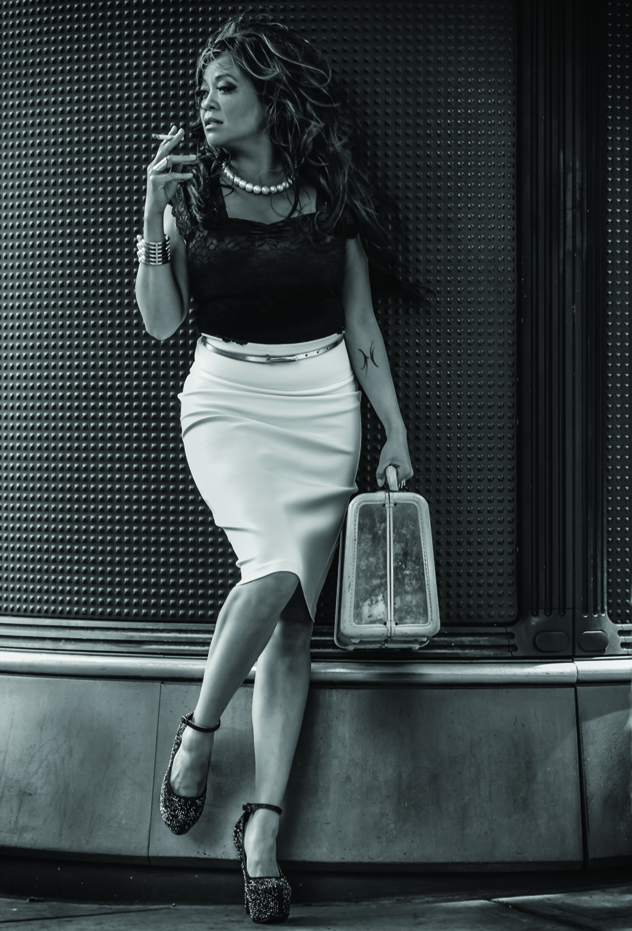 The Lara Price Blues Revue show at the Torch Club Nov. 14 will be a record-release celebration for the Price’s latest record, I Mean Business, which was recorded with producer Kid Andersen at his Greaseland Studios in San Jose.

“Kid Andersen is so talented,” said Price. “This record was my vision, but he brought it to life.”

Price and her fellow musicians have created what she describes as a declaration to live her life with integrity and to do the right thing every day. That’s what she’s getting at when she says she “means business.”

The record was recorded over the course of several sessions during a six-month period, and Price confidently says it’s her best work yet.

“My voice has turned a corner,” she said. “I feel really proud of it.”

After the record was finished, it was picked up by VizzTone Records. The president of the label had seen Price’s band play at the prestigious International Blues Challenge in Memphis some years back, a trip she was able to make because the Sacramento Blues Society gave her their endorsement and sent the band there to compete.

Price has been playing Sacramento’s Torch Club since the early 2000s and has been a regular on the Sacramento scene since early in her career.

“I know the Sacramento area well and I love coming out,” she said. “They’re listeners. They come out and they clap.”

Price, who is playing several record release parties in cities throughout Northern California over the next month, looks forward to sharing her latest release with the Torch Club crowd.

The week of her interview with Submerge, Price played shows in San Francisco, Santa Cruz and San Jose (all with different bands), but on the Friday we spoke, she happened to have the night off.

“My voice needs a little rest,” she said. “I’m gonna stay in and cook it up in the kitchen tonight.”

Price is a fast and loose talker, unrehearsed and raw for the entirety of our 36-minute conversation. She’s both thoughtful and truthful, not only about her music, but also her complex beginnings.

As our conversation wound down, I asked her a side question about the migrant situation in Syria, which is similarly complex as the situation Vietnam in the ‘70s.

“When I see Syrians passing children over a broken down ship to safety, I think about how lucky I am to be here,” she said. “I don’t think they would let a bunch of Syrian orphan babies into the U.S. now.”

Connecting that thought to her own life, she added, “I wouldn’t be living the life of a musician if I was in Vietnam.”

That doesn’t mean she wouldn’t have lived a happy and fulfilling life had she remained in Vietnam and grown up an orphan; she’s clear about that. But it’s undeniable that she would have lived out a very different life, and it’s possible her path to a life of music would have been entirely different, or possibly nonexistent.

“I know that I’m very lucky to have had the opportunity,” she said. “I hope others can have the same life that I have.”

Catch The Lara Price Blues Revue in Sacramento Saturday, Nov. 14, 2015, at the Torch Club, located at 904 15th Street. The 21-and-over show starts at 9 p.m. Admission is $8 but be sure to bring some extra cash to pick up a copy of Price’s new album, I Mean Business. For more info check out Laraprice.com.