Preaching to the Congregation: Larry Rodriguez’s Life’s Work is Making You Dance

For someone with even a passive love for music, Larry Rodriguez (aka DJ Larry or The Flower Vato) can be a pretty intimidating figure. Not only has he been making Sacramentans sweat for 20 years with his wildly popular Dance Party at the Press Club on Sundays (affectionately called “Church” by people in the know), but he’s provided the soundtrack to what most of us have been doing for the past two decades with his insane record library and encyclopedic music vocabulary. Every time he’s in control of the decks, I go home with a list of music to look up.

Maybe the most impressive part is that he’s been at it for most of his life, like the cool kid in John Hughes movies. “I was that dude in high school who was always concealing a boombox in his book bag in case there were any breakdance battles at lunch,” Rodriguez says.

As a 16-year-old, he landed a show he called Soul Sauce on a community radio station, where he played records people twice his age didn’t know anything about—jazz, funk, latin grooves, reggae and international jams from Africa and Brazil.

He gained notoriety and rose through the ranks, DJing at Jerry Perry’s legendary clubs Vortex and Cattle Club, but it wasn’t until he saved the night at a real dance party that Dance Party started to take form.

“On New Year’s Eve of 1996, I was chilling in my attic, having a puff and listening to some sides when [my brother] Mike calls from a party that some kids from The Loft were having,” Rodriguez recalls. “He told me to bring my funk and soul records because they were dancing to Billy Idol and Duran Duran singles. So I show up, throw on In the Jungle Groove by James Brown, and the joint was jumping. The rest of the night was great even with just one turntable and a rickety stereo unit. Afterward, Marla Kanelos who booked Old Ironsides asked if I wanted to do a weekly dance starting the following Sunday. That’s when Dance Party was born.”

He’s been stoking Sacramento’s flame ever since. DJing at KDVS, hosting dance nights and even doing wedding gigs.

“I’ve done cowboy weddings where all they want to hear is country music and hip-hop,” he says. “I get a perverse kick knowing what we’ve always known as rednecks are actually opening up to black culture more than we know. I was playing ‘Boot Scootin’ Boogie’ back to back with ‘Whip the Nae Nae.’”

Every time I run into Rodriguez, I walked away marveling at how deep his love for music runs. I caught up with him after a long day of making people move. His enthusiasm is so contagious that it’s hard not to catch on.

First things first: if everyone reading this was with us in your living room, what record would you put on?
I have a stack cued up by the record player right now. Looks like the first few records we’d be listening to are Bent City by Phil Yost, Plastic Ono Band by Yoko Ono, America Eats Its Young by Funkadelic and Modern Journal of Popular Savagery by Porest.

With that out of the way, tell me a bit about who you are, how you started out and ended up here?
Though I was involved in hip-hop culture as a teen, I would also listen to KDVS where I’ve irregularly been hosting shows for the last 13 years. KDVS opened my mind to many types of music. Not only were they the first local station to play Grandmaster Flash, The Jonzun Crew and Afrika Bambaataa but the DJs would mix it up with punk, new wave, reggae, etc. I was hooked.

Around that time a great venue for teens interested in post-punk and new wave dancing was Jerry Perry’s Vortograph Center [The Vortex], near 15th and C streets. The whole room smelled like cloves, which I found rather exotic and it’s where I first met DJs Dave Mier and Danny O’Grady who were cool enough to let me in the DJ booth to look through their records and to see how it was done. I was definitely interested in DJing but discouraged by how expensive it would be.

Jerry Perry let me spin in between bands several times at the Cattle Club around 1989 or ‘90 but it wasn’t until the beginning of 1997 that I first started DJing regularly at a club. I can thank my brother Mike and Marla Kanelos for springing that into action.

What’s a typical day in the life of Larry Rodriguez like?
A typical day for me is constantly pulling and filing from the sprawl of my own music collection. It’s a full-time librarian job that’s never finished. I also spend at least 30 hours a week researching and discovering new and old music, whether at record shops, flea markets, thrift shops or even on the web.

YouTube is a great place to educate yourself and discover all sorts of music—it’s a deep well. So is the KDVS library … I can go in there with a list of 10 things I want to look up and end up spending six to seven hours finding other music in the process.

Speaking of, I have a killer lineup for the Dance Party’s 20th Anniversary show at the Press Club. We have Sacto Storytellers and The Scratch Outs, both hard-hitting rocksteady reggae bands featuring members of Filibuster and The Steady Ups. Then the Cuf is reuniting for the night. All the hip-hop heads in town are hella excited about that, and there’s The City of Trees Brass Band, who are not only badass and funky but several members are regular attendees at “Church.” Opening the show is Swank [Ike Burnett] who is the brother of MC Ride of Death Grips and closing the show is Roman Austin, a neo-soul R&B crooner who wrote a sexy jam [“Church (Rollin’)”] about the Dance Party.

What about for you? Dance Party has been going for 20 years now. Has it changed much since you started?
Though Dance Party started at Old Ironsides on the first Sunday of 1997, the first run at Press Club was from ‘98 to 2003. Dan Montoya was the manager then, and he persuaded me to bring my night over there after hearing that Ironsides let me go because of graffiti constantly marring their bathrooms. At the Press, it’s well known that the heavy volume of graffiti in their restrooms began to resemble a Jackson Pollock painting, so it was a better fit from the get-go. We had a great run, won some awards, had some good writeups and Sunday eventually branched out to an additional Friday and both nights were well attended. I eventually fell out of there while clashing with the new management so I kept the Party going weekly at The Distillery and Blue Lamp with occasional nights at Old Ironsides. In 2005 Dance Party picked up Wednesdays at the G Street Wunderbar in Davis, where it’s still going.

The second run at the Press Club started in 2010 when Kirk Johnston asked me if I wanted to come back. I said “hell yes!” I’ve always loved the Press Club even after getting thrown out, to this day I’m happy as a clam to show up there and play music. Kirk died a few years ago but his brother Roger still owns the place and he’s always been a great guy and I love the manager Susan Durst, who’s been with the club after they ran out the asshole who ran me out.

I have a friend who got pregnant after starting her night at Church. How do you feel knowing you’ve been an accessory to so many people getting down—in both senses.
I love it, and I will gladly keep facilitating those activities as long as it keeps everyone happy.

I’ve had couples pay for my dinner when they saw me at the same restaurant because they met on my night, some wedding gigs have come out of it too.

Do you change your set around if you see couples need a certain mood?
While DJing any dance, it’s always a good idea to read the room as a whole and not just cater to that one bratty bro or ‘ho that’ll constantly pester you with inappropriate requests.

They usually claim to speak for “everyone” in the room while in the meantime the whole room is busy getting down on the floor. It’s a good idea to expediently cut these pests off because they tend to interfere with your work while you’re trying to focus on the set. If they keep bothering you just squirt cold water at them from between your teeth, they’ll leave you alone.

You’ve been doing this a while. Where do you see yourself in 20 more years?
If I’m still alive 20 years from now, I can see myself being the house DJ at an old people’s home. Maybe do something with experimental sound therapy or shamanism to help people prepare for crossing over to the other side or at least be at peace with it.

The 20th anniversary bash for Dance Party will take place at The Press Club (2030 P St., Sacramento) on Jan. 8, 2017. (You should be over your New Year’s hangover by then.) Cover charge is just $10, and the event will feature The Cuf, The Scratch Outs, City of Trees Brass Band, Sacto Storytellers, Roman Austin and Swank. Keep your dance card open, and get ready to throw down at 7 p.m. 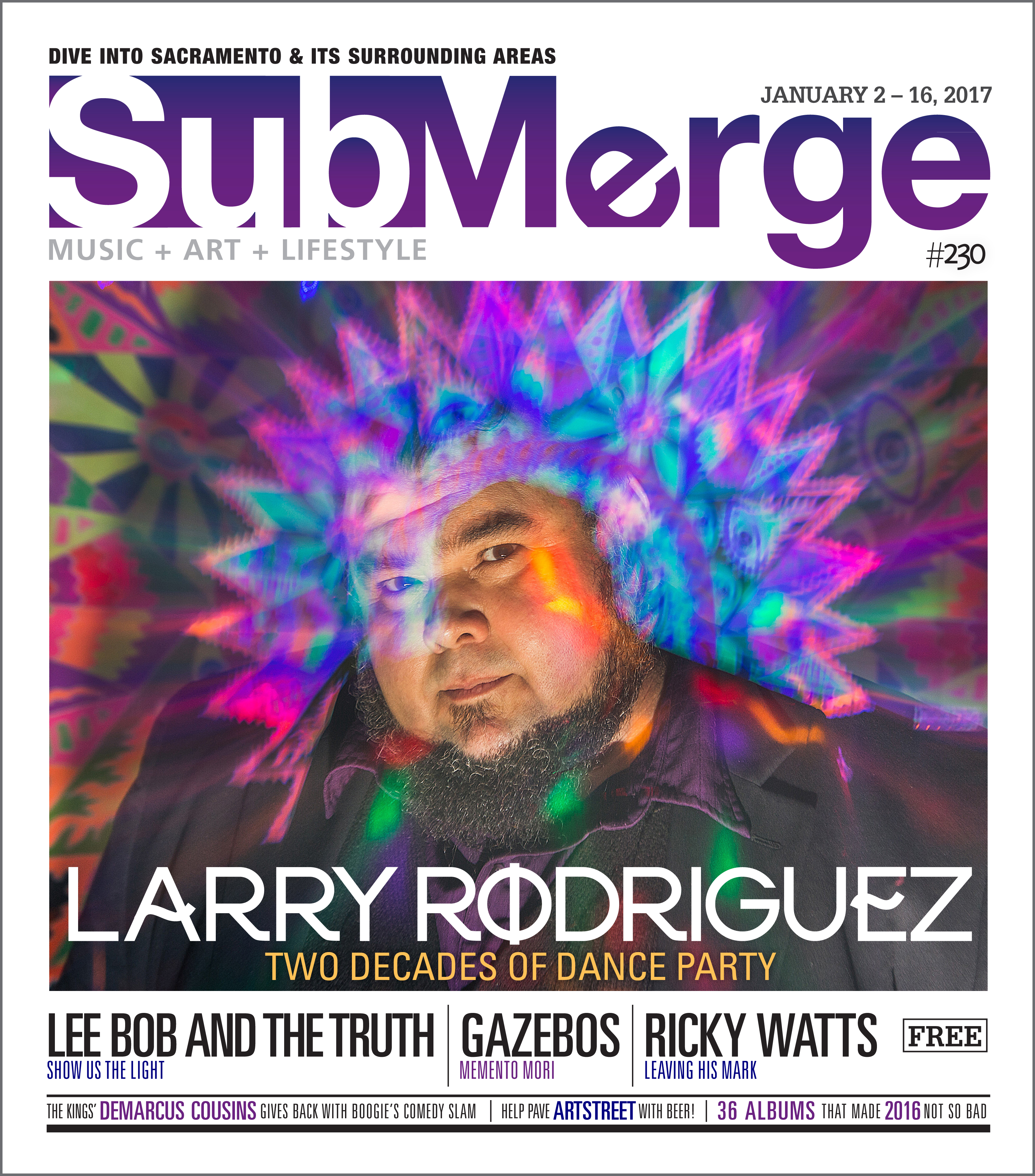