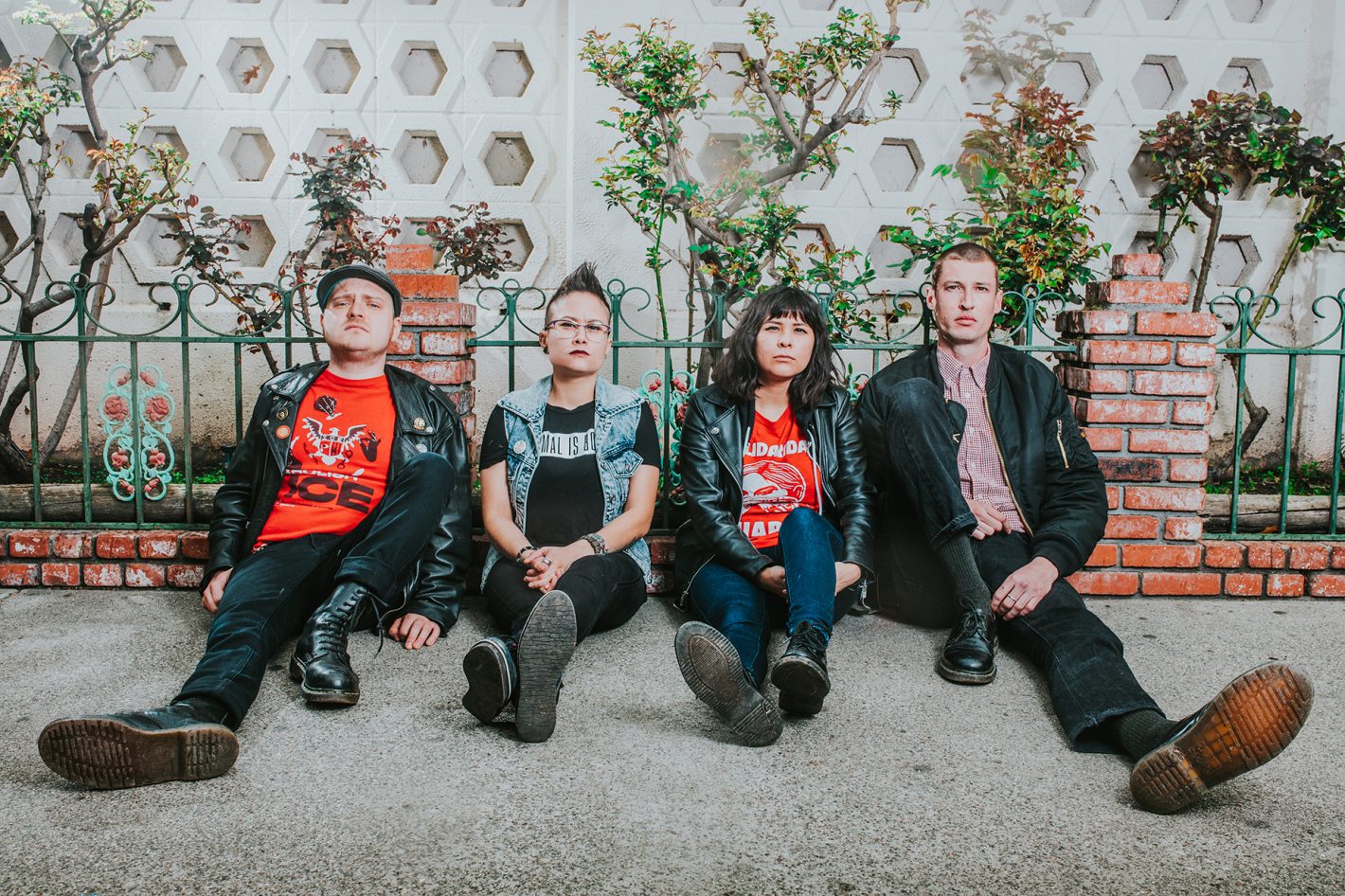 It’s raining in Sacramento and I can feel a flu coming on so I’m popping cold medicine and drinking enough water to drown a small horse, anything to get ready for the drive to Oakland to watch Las Pulgas play at the headquarters of the East Bay Rats Motorcycle Club. The show is billed as “fight night,” where you can watch the bands, but also step into a boxing ring to box anyone in attendance.

Fighting is something I’ve been immersed in for the past year. Lately it seems that’s all I’ve been doing: fighting the administration at my shitty job, fighting white nationalists and then when I get home, training in mixed martial arts with my friends. I hadn’t realized until then that the entirety of my life has been about varying shades of violence. And here I am again, driving an hour on a Saturday night to probably get punched in the face.

The band we’re going to see, Las Pulgas, is no stranger to battle. Their latest release, ¡No Pasarán! (a historically anti-fascist slogan), is a collection of chaotic (and at times unnerving) songs that push messages of struggle—system smashing and union organizing—into the listener’s face with zero apologies. The music is ferocious. Marisol Ramirez’s witty and smart lyrics (sung part in Spanish and part in English) are delivered with violent and explosive force. Bassist Allyssa De La Rosa thumps along with drummer Kelsey Brewer, who both go apeshit, track-after-track, while guitarist David Roddy stabs at the nerve endings with his jackknife surf riffs.

They cite Deseos Primitivos, Downtown Boys and Woody Guthrie as their favorite musicians and it shows. They’re the real deal. Fighters to the core.

When I ask Roddy about what it means to fight, he quotes Fred Hampton, the Black Panther, and then says, “‘Fight back’ are two words you hear a lot on picket lines or highway shutdowns, and I think it shows a knowledge that we live in a society that is constantly beating us down. It’s in resistance that we see glimpses of human freedom because those are the moments people realize they have power outside what’s dictated by the law and marketplace.”

While Roddy is short in stature and quiet in nature, he has that strange thing behind his eyes where you know he could lose it at any moment. When I watch Las Pulgas in action, it’s difficult to tell whether he’s playing his guitar or taking some sort of revenge.

Our friends are halfway to the venue already, so my wife and I pick up our friend Nigel and make our way south. The roads are wet, but it’s not raining. The freeway is like a large knife that splits the farmland into halves. I think about what it means to fight. Earlier, when I asked De La Rosa about fighting, she viewed it as a mode of survival.

“Every day is about fighting the bullshit of how society wants us to act: go to work, be so tired that you can’t lend anyone a hand, be so alienated to care about anyone but yourself, make money to not starve and stay home,” she said. “The mindset of surviving this brutality means fighting everything we are fed on a daily basis. A better future means fighting for the world we want. It’s thankless and incremental. Without a fight, what hope do we have?”

It’s a good question, and one that Ramirez immediately answered: “Being a fighter means being resourceful, passionate, and courageously persistent with conviction,” she said. “There are moments of defeat and there are moments of victory. Either way a fighter perseveres.”

It’s sort of beautiful to think that our hope can lie in the strength of perseverance, that all this shit we go though is not in vain.

We drive through a warehouse district and get to the spot, an old barbershop with “East Bay Rats Motorcycle Club” painted in gigantic white letters. Inside is a murky room with a makeshift stage, a makeshift bar and outside is a makeshift boxing ring. Our friends Mike, Aku, Crow and LB are already there. Crow is wrapping his hands. I can tell he wants to tear someone apart and drink their blood.

Nobody’s in the boxing ring so we all fight each other. The bands play and more of us fight and win and all of us eat some punches. A guy next to me takes in the scene. “Oh my god,” he says, watching two people boxing while the band Moon Sick blasts off from the stage. “I thought this shit only happened in the movies.”

When Las Pulgas starts, it’s late and cold outside. Everyone huddles in the clubhouse to keep warm and watch the band. Ramirez paces the room, screaming songs of resistance and struggle. Brewer bashes his drums while making faces that only happen in the heat of battle, or sexual intercourse, while De La Rosa stares intently at her bass, barely breaking her gaze. Roddy jumps back and forth, sometimes turning his back to the crowd. It’s chaos. Blood drips from my left nostril. I try to wipe it with my sleeve, but it keeps coming, so eventually I let the taste of iron fill my mouth.

Brewer, the oddball of the group—a head taller than most members, a lanky, boisterous, in-your-face white guy—says something interesting about fighting: “We fight at different scales, with what tools are available. We play different roles. We don’t all fight the same way or for the same reasons, but often for the same outcome. By any means necessary and tactically inclusive,” he says. But his thoughts take a sudden left turn. “Some people condemn fighting. They have less to lose or more security in what they have. They are soft. They should get their ass kicked. Fight me.”