LE BUTCHERETTES WILL MELT FACES AT HARLOW’S ON SEPT. 14 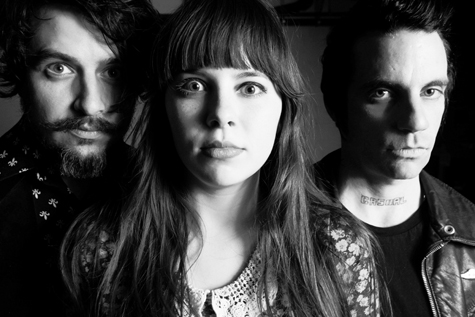 Local promoter Brian McKenna recently confirmed the much-hyped garage-punk trio Le Butcherettes for a Sept. 14 gig at Harlow’s, and we here at Submerge could not be more stoked. This in your face, rowdy-as-fuck band had one of the most blogged-about sets at this year’s Lollapalooza, recently toured with Sacramento’s own Deftones, and will soon embark on separate stints with Iggy and the Stooges and The Flaming Lips. You don’t score gigs like those unless you’re doing something right. The Los Angeles-based group has local ties in bassist Jonathan Hischke (pictured on left), who has played with and/or toured/recorded with such local-ish bands as Hella, Agent Ribbons, Casual Fog and a ton of others as well as national acts like The Mars Volta and Broken Bells. If you’re a fan of spastic, energetic, borderline obscene live performances, you’re going to want to mark your calendars for this one, as lead singer Teri Gender Bender is known to throw shoes into the crowd, spit a lot and douse herself in fake blood–you know, the whole nine. Hischke and drummer Gabe Serbian (formerly of The Locust) get down too, which creates a sort of chaotic, yet somehow controlled vibe. It ought to be interesting seeing a (hopefully) primed and drunken Sacramento crowd react to their onstage energy. I’m forecasting much spilled beer, intermittent mosh pits and a high possibility of stage diving in Harlow’s near future. Show is $8 in advance, 21-and-over only and doors open at 8 p.m. Opening the show will be locals I’m Dirty Too and Diciembre Gris. For more information, visit Harlows.com, Abstractsacramento.com or hit up The Beat or Dimple Records to score tickets.