Le Pew: The Garlic Shack opens its door and hopefully your mind 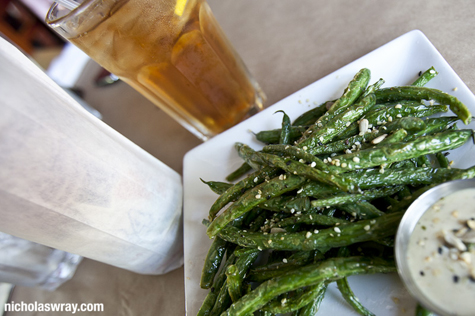 You may have driven by the corner of 19th and J streets and noticed that Plum Blossom is no more, and in its place is the newly opened and curiously named Garlic Shack. I’ve heard mixed feelings from folks about the closing of Plum Blossom; some couldn’t care less and never went there and others were bummed because sweet and sour chicken was “awesome” at 3 a.m. after seven shots of Jameson. Plum Blossom was a fun place, I agree, but I wouldn’t judge a place’s merits by how late it stayed open. And, if that’s all you’re bummed about, Garlic Shack is open late Thursday, Friday and Saturday to cure those late-night cravings. That deserves another round.

Before I begin, please do yourself this one little favor and stay off of Yelp before you try this place out. It’s OK to make up your own mind about restaurants, and for crying out loud they just opened. I am in no way discrediting Yelp or Yelp users (I used to be one before I began writing this column) but the lack of little stars can be harsh on new restaurants. Submerge prides itself on elevating the awareness and interest in all things Sacramento, and the “Refined Tastes” column is no different. I seek to tell you about places Sacramento loves or places that are new and worthy of checking out. Garlic Shack falls into the latter category, and it is up to you to decide if it falls into the former. Pardon me as I step down from my soapbox. 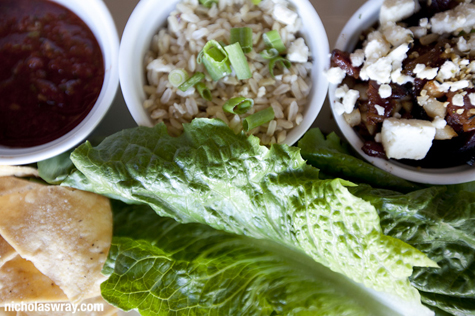 Submerge visited on a Monday afternoon; hot but not miserable and the newly installed roll-up door was wide open, giving the stoplight voyeurs something to gawk at. The table tops were draped in brown butcher paper and a glass of crayons rested in the middle. Our server grabbed the color red and in big cursive letters wrote her name, “Dre.” “I’m Andrea but my friends call me Dre,” she said with a smile from ear to ear. “How about we start off with the Nor Cal Green Beans,” she continued. Flash fried green beans tossed in hemp, sesame and sunflower seeds and served with a wasabi balsamic aioli dipping sauce. This dish was phenomenal and was a good indicator for how the rest of the menu might taste. Bold flavors and adventurous plates are the theme here, and it’s no surprise considering that garlic is in the spotlight. This isn’t The Tofu Shack (although they have some of that too); we’re talking about the stuff that wards off vampires here.

“We’ve been…trying to give them more garlic,” says owner Kenneth Powers. “It says it in our name, and they can’t get enough of it.”

And so garlic is integrated into many of the dishes, where it can be the star and leave you reaching for the breath mints or where it simply is used to accent what’s on the plate. The special on that Monday was a beer-battered waffle with roasted garlic, caramelized bacon and offered with fried chicken, if one would be so inclined. Inclined we were because it’s not smart to pass up chicken and waffles, especially when there’s bacon and garlic involved. This dish was not for the faint of heart but for the hearty enthusiast. The chicken was smaller pieces of tender and moist breast that were fried in a light batter, while the waffle contained bits of the roasted garlic. Strangely, the garlic was integrated so well into the batter that I almost didn’t notice the texture until midway through eating. I know what you’re thinking right about now–garlic in waffle batter? Yes, and chicken and bacon and syrup. Oh my! Again, a heavy and adventurous plate but fun and executed well. 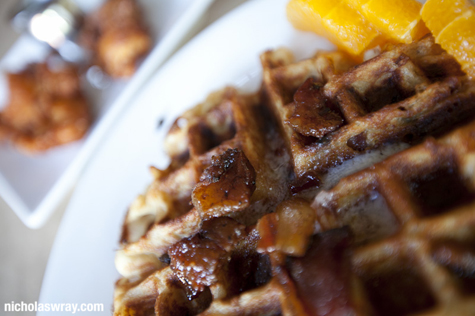 For those with a lighter palate, the Daphne offers balsamic glazed portabella mushrooms with tofu, garlic mashed potatoes and fresh veggies. Pork lovers can get excited about the West Coast Philly, a new spin on a classic. Take away the cheese steak, add thinly sliced pork loin, Dijon glaze, sautÃ©ed mushrooms and onions and then top it with mozzarella on a ciabatta roll and you’re sittin’ pretty.

With the heavy to the light, Powers likes that he’s able to showcase two sides of people’s eating habits.

“We’re not trying to please everybody, but we’re trying to let more people know that people are aware of their diets. You can get the greasy food; you can get it greasy and deep fried or you can get it steamed with brown rice.”

The range of menu items that are all pretty interesting and made with fresh, local ingredients makes this place worth checking out. Taking your time to look over the menu will benefit you, because it’s not really laid out into obvious sections. There are sandwiches, burgers, wraps and entrees but you may need to read a little to figure that out. Local beers are offered, but I recommend the house-brewed ice tea. Ask for the simple syrup to sweeten it up a bit. And no, it’s not garlic tea.