Let’s Get Ready to Rumble 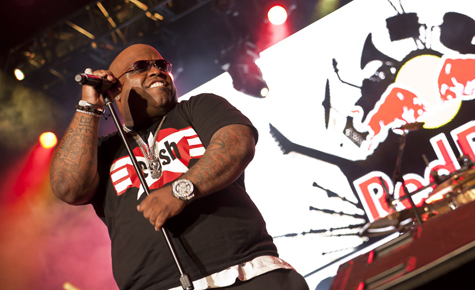 Red Bull is a company known for doing things big, nay, huge. Most events they throw are spectacles that leave people thinking, “WTF?” or “How is that possible?” Example: New Year No Limits where every year Red Bull athletes push the boundaries of their respective sports, smashing world records left and right, leaving jaws on the floor all around the world. Or how about Red Bull Media House’s groundbreaking and awe-inspiring snowboarding films in collaboration with Travis Rice? That’s It, That’s All, released in 2008, and the upcoming film The Art of Flight (September 2011) are arguably two of the best films ever produced in their genre. Point being, anything Red Bull touches turns out epic.

This past weekend on March 12, their Soundclash event held in Las Vegas featuring Grammy Award winner Cee Lo Green and indie pop stars The Ting Tings was no different. Roughly 6,000 eager spring breakers crowded into the MGM Resorts International lot directly across from the Luxor (the giant pyramid looking building that shoots a beam of light up into space) to experience a concert unlike any they had ever seen. The set-up looked and felt more like a festival than a regular parking lot concert, with two giant stages facing each other on opposing ends of the lot, leaving the crowd and a giant DJ tower where host La La Anthony oversaw the event sandwiched in between.

Before the show started an informative video aired on all the giant screens around the venue that explained what we were about to see and hear. Then, it got underway. Round 1 was the “The Warm Up” where each act performed three original songs. Cee Lo performed “Lady Killer,” “Bright Lights” and the Gnarls Barkley hit “Crazy.” The Ting Tings responded with “Keep Your Head,” “Hit Me Down Sonny” and “Shut Up and Let Me Go,” which you have no doubt heard. It was featured in 2008 in a famous Apple commercial. Round 2 was “The Cover” which featured both acts covering the same song, The Clash’s “Should I Stay or Should I Go,” with their own personal twist on it. Cee Lo’s version was pretty a straight-forward, rockin’ rendition of the classic song, but The Ting Ting’s version had more depth and dynamics to it, progressing into a high-energy finish. 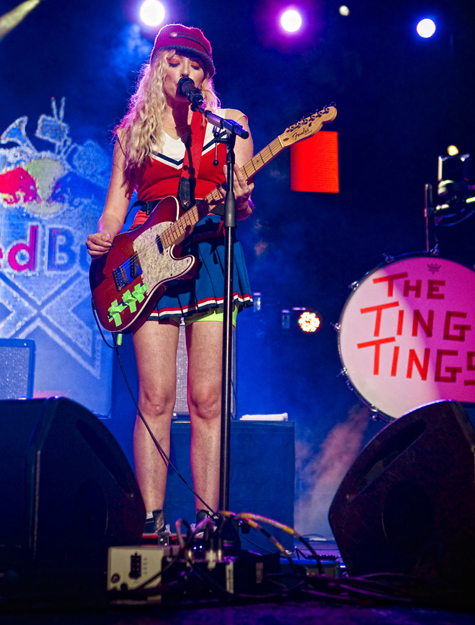 Round 3, “The Takeover,” was probably the most innovative and impressive round of all musically speaking. The concept seems simple enough: one band starts a song, the other band takes it over seamlessly halfway through and finishes it, but in reality it is extremely difficult to get the timing and pitch just perfect when taking over another band’s song, especially from about 100 yards away on a separate stage entirely. Each group started two songs; Cee Lo’s tracks were “Run” and “Smiley Faces,” (both technically Gnarls Barkley songs) and The Ting Tings songs were “Fruit Machine” and “Be the One.” This led to Round 4, which was called “The Clash” and highlighted the artists’ versatility by having them perform their songs in three different styles outside their comfort zone. The styles chosen were reggae, acoustic and rock/metal.

Finally, round 5 was “The Wildcard.” In this round, the bands were allowed to invite a special guest to perform with them on stage. The Ting Tings appropriately enlisted the help of an Elvis impersonator (this did take place in Vegas, after all) to help them with their hit single “That’s Not My Name,” a crowd favorite for sure. Cee Lo invited Khujo, T-Mo and Big Gipp to reunite Goodie Mob for a performance of “Get Rich to This.”

When round 5 ended the crowd somehow knew the show wasn’t done, Cee Lo hadn’t even performed his latest smash single “Fuck You,” which might go down as the past year’s most talked about, controversial song. After a few moments The Ting Tings joined Cee Lo on his stage and they busted into a collaborative version of the song, sending the crowd into a frantic sing-along. Afterward DJ Mick Boogie kept the party going for a bit, large crowds stayed and danced, but after a while everyone headed to Studio 54 inside MGM for the official Soundclash after party featuring The Glitch Mob. Once again, Red Bull does it properly.