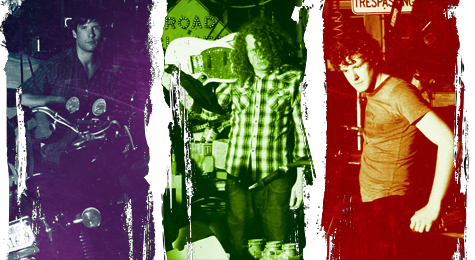 A rock concert might be the only place in the world where it is acceptable to thrash around with full force, scream at the top of your lungs and push random people to the ground. If you tried this on the street, a grocery store, or a restaurant you will be kicked out and given the cold shoulder by society. Whether it’s moshing in the crowd or playing guitar on stage, rock concerts welcome your inner beast with open arms. There is one local band that produces this kind of high-energy show that can make anyone want to jump around. Submerge caught up with brothers Eddie and Matt Underwood, members of Sacramento rock-trio Lite Brite, in front of Peet’s Coffee to discuss their new self-titled album and rocking out on stage.

“If we have any underlying rage, [performing] is a good way to release it,” said vocalist and guitarist, Eddie Underwood.

“Instead of stabbing each other in the face,” continued drummer Matt Underwood. “It’s an expensive habit really.”

Eddie, Matt and Robert Lander, bass, are ready to bring their high-energy show straight to your living room. Their goal was to make their new self-titled album as close to the band’s live show as possible, making Lite Brite’s stage-fueled passion completely mobile.

The opening track of Lite Brite’s new album are recorded sounds from the band having fun with an analog phaser, creating eerie sounds that set the stage for their 12-track rock album. “We had an idea that it was going to be a theme in the record. I don’t think it ended up being exactly the way we thought it was going to be but it was a good way to tone the record,” Matt said. “I like the way that it turned out. It’s a noisy record.”

Lite Brite is excited to unleash a record that it can completely claim as its own. There is only one track, “Heaven,” on which the band collaborated with a musical engineer.

“It’s going to be really cool though, getting our music done, because we never really had a whole album that is just the way we wanted it to be,” Matt added.

Lite Brite hopes to give the new music as much exposure as possible, including a tour in the near future and to make the tracks easily accessible and sometimes free online. Matt Underwood wanted to adopt a business model that was made popular in the ‘60s by bands such as The Rolling Stones, where they would release numerous singles at a rapid pace.

“It would be really timely,” Matt explained. “It’s sort of this idealistic vision that I had, get something out and get it out on the street really fast. It would be the right song at the right moment.”

So far the Underwoods have been very successful in getting their music out quickly even though they have only played music professionally for the past few years. While in high school, Matt and Eddie would jam out to cover songs in their parent’s garage with their friend Bob.

“We just started playing covers and stuff. It was fun playing stuff that we like and Bob came over every day. He didn’t do homework. That worked out well,” joked Matt.

Since then, Lite Brite has been on two West Coast tours including one with Middle Class Rut. During their past tour, life on the road never seemed to get dull for them. Every city had a new adventure waiting for them. While stopped in Minneapolis, they had their van broken into early in the morning.

“What really pisses us off is that they stole our lunch meat,” Eddie said. “All of the equipment was in the back, and they could have easily gotten thousands of dollars worth of equipment, but they just went though our ice chest and downed 10 Red Bulls and ate our lunch meat on the spot.”

But missing lunch meat wasn’t their only problem that day. The thief decided to break in through the passenger window and crack the windshield causing Lite Brite to rush to get it fixed before a show. While on the same tour but this time in Wyoming, Eddie and Bob almost landed in a bar fight over the topic of Nickelback.

“I might have said something like, ‘Nickleback sucks,’ and one guy said, ‘Hey, hold on a second, I like Nickelback. I’m about to knock your teeth in.’ And then all of a sudden someone comes in from another room where Bob was playing pool and he said to me, ‘You better come quick… Your friend is about to get his teeth knocked in,’” Eddie said.

They decided to leave the bar before anyone would have to make an emergency trip to the dentist. But the highlight of their previous tour was the high-energy and jam packed shows, full of people who have never heard of them before but loved every minute of it. “The last two U.S. tours that we did were awesome,” Matt said. “Pretty much every show was just tons of people to play for.

“We completely sold out of CDs really early on our last tour. We had to burn thousands of CDs so we had something to sell.”

Recently, you might have caught them at Friday Night Concerts in the Park in early May. That night was one of their most memorable performances because there were over 7,000 people watching them at Cesar Chavez Park.

Before playing a high-energy show, whether it’s in front of a huge park or small venue, there isn’t much that Eddie needs to get himself pumped up to jam on stage. “The best way to warm up is to have a couple of beers. You don’t want to overdo it but not too little, because we don’t want to stand there like a couple of stiffs,” Eddie joked. “And not too much or else Bob and I will start yelling at each other on stage.”

But now Lite Brite is ready for Sacramento to join them at Ace of Spaces on July 6, 2012 for their CD release party. 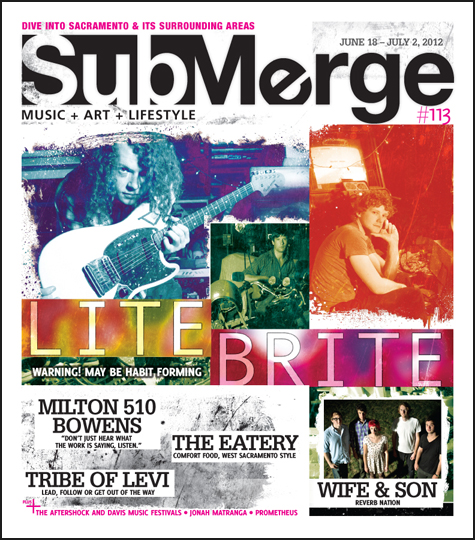 A stacked lineup will help Lite Brite celebrate the release of their self-titled CD. Stuck, Musical Charis, Simpl3jack, The Hungry and The Trees will all join Lite Brite at Ace of Spades in Sacramento on July 6, 2012. Tickets are $10 in advance/$12 at the door. For ticket information, go to http://aceofspadessac.com/.