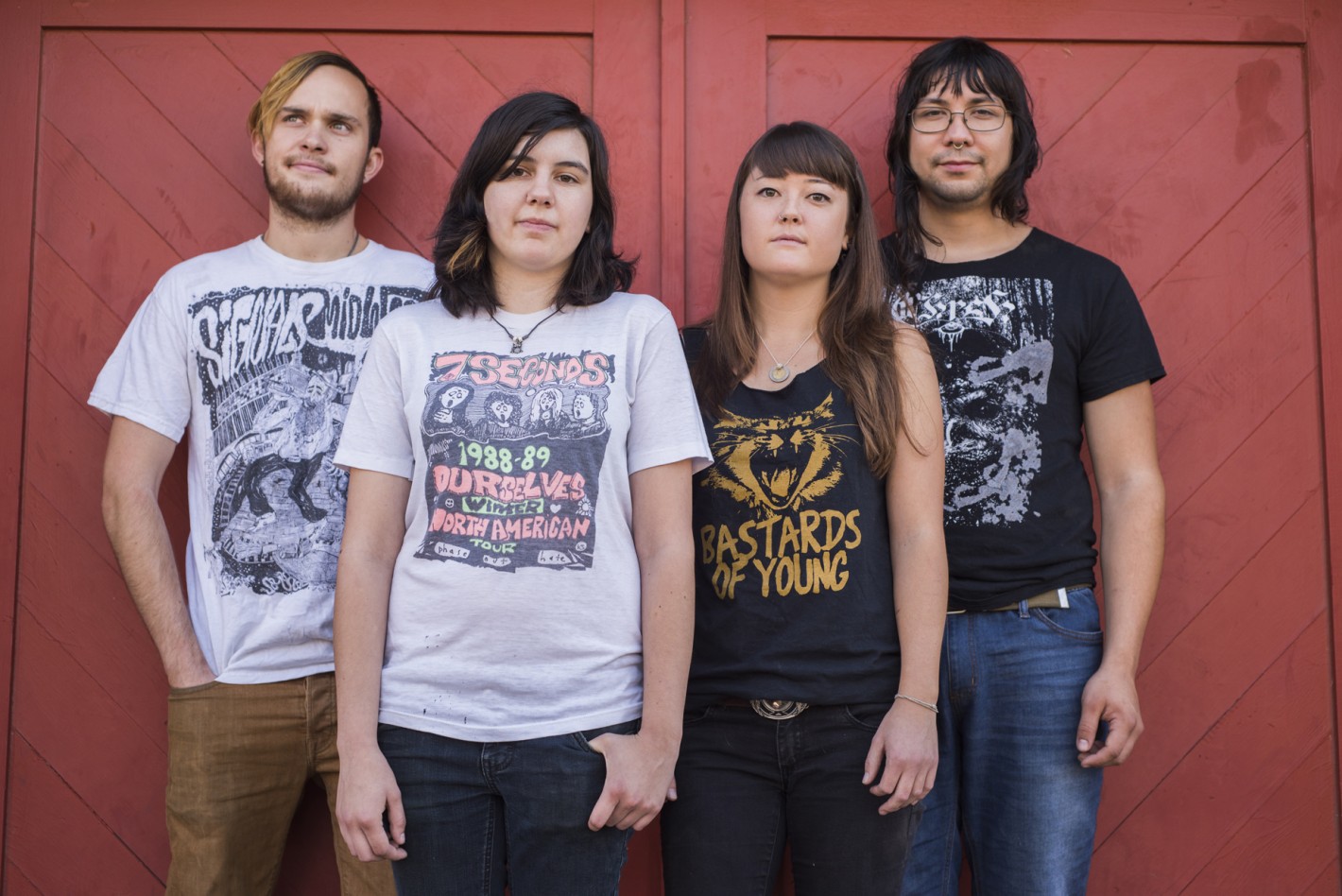 They’ve been called an emo band, which is weird. When I think of emo I think of a mopey teenager, clad in black, slouched in front of a 7-Eleven, writing dark poetry in a notebook while sucking on a clove cigarette and waiting for a homeless man to buy him beer. Actually, now that I think of it, that seems really fun.

But not as fun as Little Tents.

Little Tents is what I would call a pop punk band, but that’s the problem with labels: When I hear “pop punk,” I immediately think of Blink-182 and that’s exactly what I don’t want you to think of. Or, actually, think of Blink-182. I don’t give a shit. But Little Tents is pop punk in the way Jawbreaker was pop punk—melodically interesting, catchy, lyrically expressive, yet just hard enough to make your conservative uncle say, “What the fuck is this shit?”

Little Tents’ debut album Fun Colors (out now on Bomb Pop Records) is a short collection of seven quick songs that jump back and forth from melodic to chaotic, and it really couldn’t be any more delightful. And unexpected. Plus, there’s something enigmatic about the band. Perhaps it’s the upbeat tempo, which is pretty much the opposite of the dark, drone-y shoegaze that seems to have permeated underground music as of late. Or maybe there’s just something about Little Tents that isn’t quite right, an incongruous quality that I can’t quite pinpoint. For example, take these lyrics: “Inhale as the sky rains death. Through a haze, planes crack twilight/Smoke-filled teeth chatter with the chill of another night alive/The air will choke you. The water will kill you.”

That’s some darkly poetic shit, right? Some literature written by a deeply disturbed wordsmith? Maybe that’s why people call Little Tents “emo.” But the name of the song is “Shrimp Pants.”

It makes no sense.

Here’s another lyric: “Dawn gives birth to a bleeding child/The hope for a new day leaves us alone with a pile of tiny bones.”

“Khakis on the Beach.”

So this begs the question: What does the song title “23N60” mean? Is it a super secret combination that unlocks a vault containing Little Tents’ vast fortunes? Is it the Bible Code? Or is it the name of an infectious disease?

To find the cut of Little Tents’ collective jib, I thought I would lure them with pizza (if there’s one thing a pop punk band loves it’s free pizza) so I could interrogate them. So, we—Lys Mayo (guitar), Audrey Motzer (guitar), Jordan Trucano (bass) and Adam Jennings (drums)— gather at Pete’s to hash it out.

They order a big ass pizza and some beer, and I order a douche-y vegan sandwich.

They laugh, while Mayo and Motzer explain that it’s the GPS coordinates of a weird logging road by the American River where they once got lost on a camping trip.

“Khakis on the Beach?”

Well, that song was named such because a guy wearing khakis walked by on the beach.

In short, there is no rhyme or reason as to why they name the songs the way they do. They just like naming songs weird stuff, so they do that.

I also wondered about who exactly sings the songs, because when you listen to the album, you hear a sweet voice and then a bunch of screaming, and it can be disorienting. For some reason, I figured Lys Mayo does most of the vocals, but it turns out Audrey Motzer sings a lot of them and Mayo does a lot of screaming. There’s also a dude (or a couple of dudes) who scream, too. Or maybe more. I don’t know. Even after they told me, it’s still confusing.

I think it’s confusing to them, too.

“She sings all the hits,” says Mayo, pointing at Motzer, who blushes.

It becomes wholly evident that the band does whatever feels right, which is often just an intuition and a willingness to practice until something cool-sounding comes out. In fact, it’s how their band became a band.

“[It] was me and Lys drinking in her backyard with acoustic guitars,” Motzer says. “We both didn’t know what we were doing at the time—and I still don’t.”

Their style of music comes from a wide swath of influences—local bands like Gentleman Surfer, Dead Dads (in which Mayo plays drums), Church and VVomen inform a portion of their musical landscape.

“Between all of us, we listen to a lot of different music,” Trucano says. “So we just threw it all together.” Jennings adds that they have all been friends since they were pre-teens, so they spend a lot of time together, sitting around, drinking beer and melding minds, the resulting songs a compilation of dueling ideas and differing tastes, a sort of auditory representation of their friendship.

“A lot of the decisions that we make for the structure of the songs is relatively arbitrary,” Jennings says. “We’ll kind of just pick it and do it that way every time.” They try to match their live songs to the way they’re recorded in the studio to maintain some sort of consistency.

This insight into the Little Tents process is fascinating, but, ultimately, super unhelpful when trying to trap them into a genre-specific categorical box. Nevertheless, we end up talking for a while as the band devours their cheese pizza, but none of what we cover—the lack of all-age venues, a sketchy house show where the hosts dosed unsuspecting guests with LSD, Sacramento’s inherent radness, Charles Albright getting shitfaced at a party—helps me understand Little Tents in the context of a genre or as a cohesive band. Everything they do seems to be on accident. Aside from their close friendship, there is no real narrative line that runs through the band’s history. They’re fascinating, of course, but only because of a random series of beautiful miscalculations. Or maybe not.

At the end of our conversation comes the most revealing part of the interview. There are two pieces of pizza left. Jennings eyes them both and slides them onto his plate. He reaches for the leftover ranch dressing and slathers it on one piece and puts the other piece of pizza on top. He then eats the slices like a sandwich. A pizza and ranch sandwich.

“How was your pizza sandwich?” I ask when he is finished.

“It was pretty tight,” replies Jennings, smiling a wide smile.

I’m here to tell you, friends: Little Tents are a band of genius punks.

Pick up a copy Little Tents’ debut album Fun Colors in digital form at Littletents.bandcamp.com or on CD at Bombpoprecords.com. Check them out on Facebook to look for upcoming show dates. 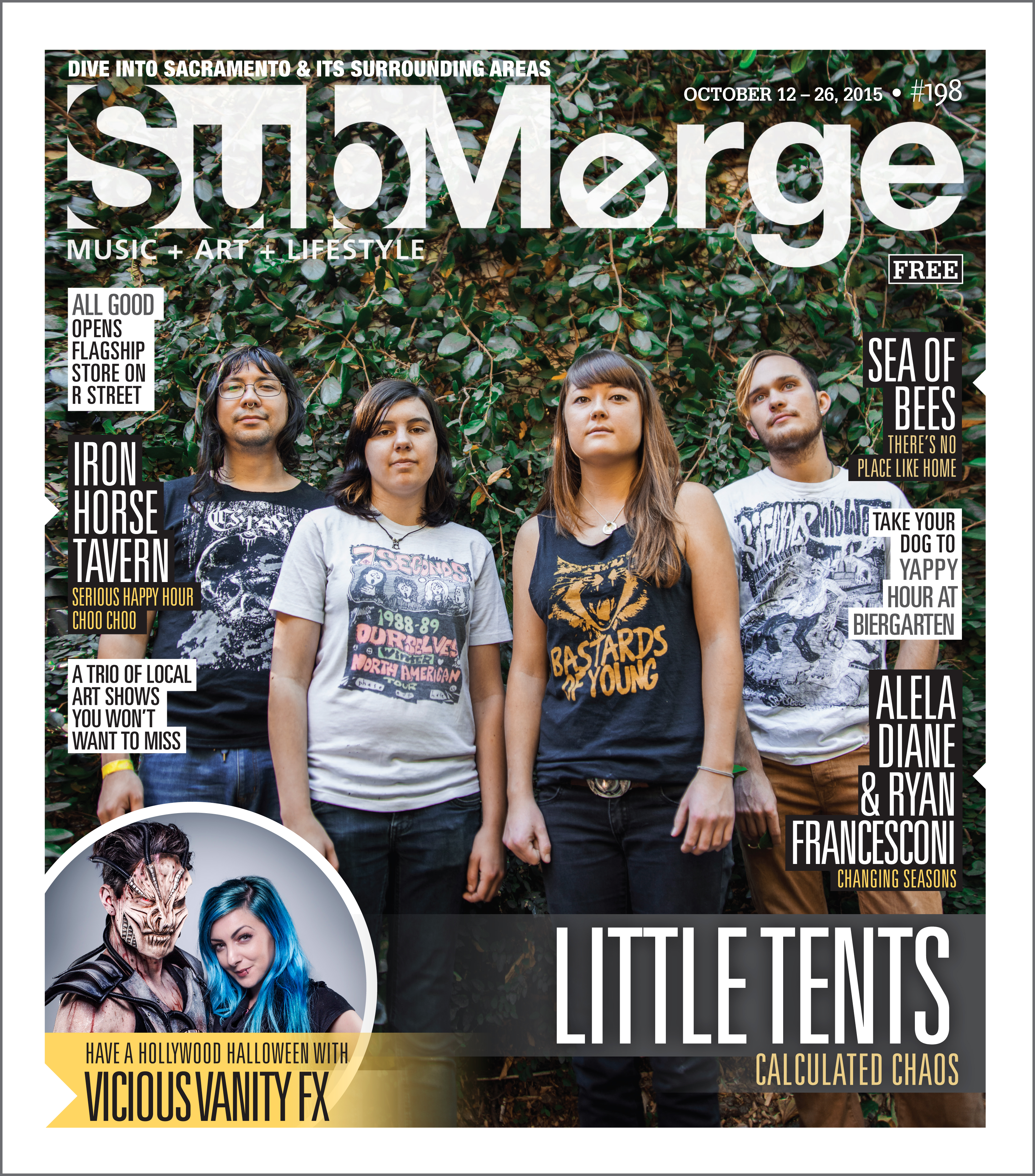