As DJ Rated R put the scratch to his crewmates’ reflections on the intro to Live Manikins’ Full Canvas record, the rappers speak with disbelief about their three-year lapse between albums. “I’m sitting here looking at the credits and the album cover and there’s a lot of growing up,” he said. If the hip-hop group’s first record, Still Life, was merely a snapshot or Polaroid, Full Canvas is the result of three years spent revising the portrait in the midst of what one of the group’s members, Self, calls real life shit.

In its earlier days, Live Manikins was a mainstay at Second Saturday events at Revive, The Body Shop and United State boutique, at which they were one of the first hip-hop crews to host events without drawing suspicions from Sacramento’s law enforcement. “We always coordinated with local businesses,” rapper J-RockIT said. “We threw shows right outside with DJs. When Second Saturday finally started blowing, it would just get packed.”

Self said the crew found sanctity in a specialized wording of the event, so that it never got shut down. “There was once a time we couldn’t even perform because we were hip-hop,” he said. “We’d bill it as spoken word artists with a funk rock background. That was our work around. But we also brought hella different bands just to fool the police.”

Live Manikins’ debut Still Life earned the crew numerous accolades and local bragging rights, but the Manikins put an immediate follow-up record aside to pursue solo projects. Linguistics, who goes by Mr. Lingo these days, dropped Anybody Want a Peanut? in 2010, which earned him a Sammie nomination. Self split time between Sacramento and Los Angeles recording his solo record. J-RockIT and Runt Rock formed Live Audible Soul, later renaming the group DefRockIT, and took their EP as far as the Philippines.

While Rated R won DJ contests, toured the West Coast with Random Abiladeze, formed a DJ crew called Sleeprockers and started a DJ night at Capitol Garage called Joints and Jams. For Rated R, the experiences came in such a whirlwind that Self kept reminding his DJ of the events, to which he replied, “Wow… I forgot already.”

The good-ole-days summation reads like a storybook: three years of continued success, but each storyline was eventually mired in tribulations that led each member back to the group project–well, except for one. After the release of Anybody Want a Peanut?, Mr. Lingo brought his own peanut into the world. As Live Manikins began to regroup for a follow-up record, Lingo chose to remain an auxiliary member to focus on his family. “We understand especially since it’s their first kid,” J-RockIT said. “It’s happened with a couple of our friends in the past who’ve done music. And then they come back when they’re ready.”

Self did record portions of his solo record (due in the spring) in Los Angeles, but he also lost his job at Hewlett-Packard and made vague mentions of an incident with the law in Seattle, while listing his trials. “After I lost my job at HP, mentally I wasn’t strong enough,” he said. “I’d never had to go through the loss of a job, losing investments…shit, I lost a lot. I had to get over it and find myself once again.”

Touring the Philippines in 2009 should have been a golden opportunity for J-RockIT, Runt Rock and DJ Rated R, but a car accident nearly claimed the group’s lives. The brakes gave out on their vehicle. sending Rated R, who was in the backseat, through a window. He sustained major head and spinal injuries as well as a broken collarbone and clavicle. Rated R fully recovered, but still bears a large scar on his forehead from the incident. “It’s right there in the mirror, every morning to keep on doing it,” he said.

J-RockIT continued, “My wife was with us and a couple other people. That was a big calling. It was hard on the whole crew when we got back. After things settled it turned into ‘let’s do it.’”

Live Manikins was never defunct in the passing years. Songs were casually recorded and archived; each member made appearances on the solo records. The group would get together for one-off shows, opening for nationally touring acts and billed slots at festivals. The members joked, though, of a divide which made the performances less about Manikins. “Me and Gabe [Runt Rock] would work DefRockIT stuff into the Live Manikins shows,” J-RockIT admitted, since his group had a new EP. Self chimed in, “Yeah, y’all strong armed us. He would suggest things like, ‘Let’s do this track,’ and I’d come back with, ‘That’s not even a Live Manikins track,’ and he’d say, ‘But we’re both in it.’”

The accruement of value-altering, trying events led to the solo Manikins’ regrouping. “We had a moment of reflection and remembered that we’d built something,” Self said. “We had a lot of sit downs that led to kicking it, hanging out and freestyling. After a couple times it just became apparent we can rock.”

Even with the lack of focus, the group recorded 30 to 40 songs to consider for the sophomore record. Full Canvas in final cut form is 15 songs deep. Largely produced by Runt Rock, Full Canvas explores a live sound aesthetic, but maintains close ties to hip-hop’s roots in flipping samples. Gritty funk licks propel the production, while subtle sonic tweaking prevents the beats from falling into static lapses. “Sleepy” is the oldest track to make the album, but it was still adjusted throughout the years from its original form. J-RockIT said the album title came from “focusing on ourselves to create this new chemistry.”

“It was almost like a piece of all of us,” he said. “So the title represents the completion. Within the last year everybody got super motivated. You can hear the passion in all of our voices. ”

Outside production came from DJ Epik, Resource and Thiago Prodigo, who is from Brazil, while Random Abiladeze offers a guest verse on “Heights.” The group recorded in several studios around the Greater Sacramento area, including downtown, Visalia, Rocklin and Elk Grove–the home of their new label Freqy Music Group. With Live Manikins’ reestablished focus and individual growth the problems surrounding them were reduced to molehills, or in some cases, snake holes. While recording in Rocklin, the worst that happened to Self involved a smoke break incident. “There’s snakes way out there,” Self said. “One of the sessions I was out smoking a cigarette with Runt Rock and I looked down and there was snake. I’m not used to that being in the neighborhood. I’m fine with loose dogs, but not loose snakes.”

Rated R chided him with, “What, was it a green garden snake?”

Self, getting worked up, responded, “It was brown. It wasn’t a green garter snake. It was like… [stretches arms out to indicate its alarming size].”

Touring plans are in the works, but Live Manikins’ primary focus is their album release party on Thursday at Harlow’s. The group secured sponsorships from Boost Mobile, Virgin Mobile and Scratch Live, among others. The purchase of exclusive VIP tickets means swagbags and a catered pre-party. Mr. Lingo is joining Manikins on stage as well. “We’ve been training…hard,” Self said. “Hours and hours and hours per week. I want to crowd surf. That’s my goal. I want to feel confident to be a six-five, 200-pound guy who won’t jump out and just crush one girl.” 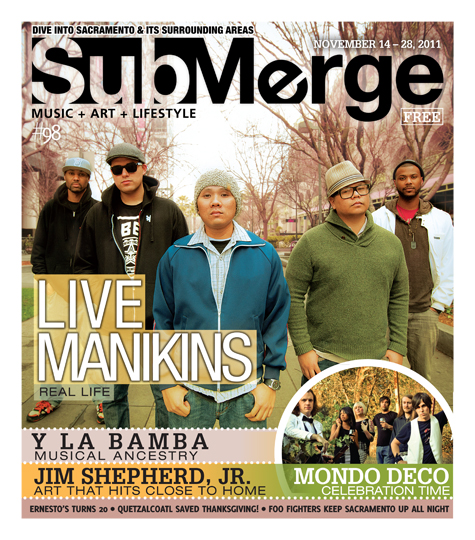 Live Manikins will throw the Full Canvas album release party at Harlow’s on Nov. 17, 2011. The show will get underway at 8 p.m. Tickets can be purchased through Harlows.com and will cost $10 for general admission and $20 for VIP tickets, which will include a swagbag and a catered pre-party.