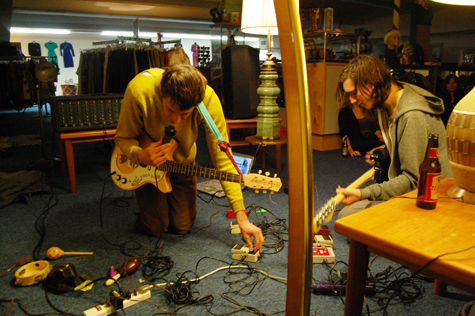 Bows & Arrows secondhand hipster apparel boutique is not known for its live entertainment, but the dozen or so hip enough to be in the know got a brief, but aurally excitable performance from Placerville’s Pregnant Dec. 3.

Formerly grid kids, Pregnant moved out to the sticks, possibly to their greatest benefit. Their album, Liquidation on Swans, is a complicated experience. Bountiful in picturesque collages, the record will rack your brain in wonderment as to where Daniel Trudeau found these sultry sounds—which is why seeing Pregnant perform is such an enlightening delight.

The Bows & Arrows atmosphere complemented Trudeau and his guitar-strumming assistant, Michael Saalman. The lights were turned off except in the small floor space, cleared for their instruments. The band played in the lighting of kitschy lamps for sale, while onlookers sat on the floor, giving these living room scientists a fitting workspace to kneel among their array of pedals and build each song from scratch. 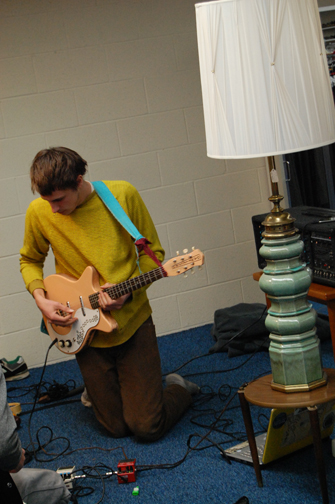 The joy of watching Pregnant comes precisely from that. Saalman noodled at his guitar endlessly, while Trudeau methodically looped each piece of his instrumentation into the fold. Trudeau beatboxed, pitch shifted his voice into kooky layers and strummed a wooden lizard to complete the steps of “Do That.” He created bass from rhythmically breathing heavily into the microphone, tweaked a kazoo into a swarm-of-bees buzz, and skronked on a saxophone, proving his talents beyond the junkyard noise. The scatter of percussion tools on the floor and the effects pedals were all utilized to steadily bring each song to fruition. The sound was reminiscent of Brooklyn-based noise bands like Say No! To Architecture, GDFX and Zs. However, Pregnant is inherently California freak folk. Those Brooklyn kids are all harsh noise from buzz saw reverb and nose bleeds, while Pregnant is countrified and tender. Birds chirp, wind chimes made of bones jingle and the warmth is candid.

There’s nothing to fear in a Pregnant record and that kindness is present in their performance. The duo never acknowledged the audience, far too engulfed in their process, but once they finished, they thanked us, awkwardly bowed, locked hands and dry humped a lamp.

Pregnant plays traditional venues, but if you have the chance, see them in a living room, a boutique or a basement. Make sure there’s carpet and a place to kneel. It’s best to be as comfortable as the musicians, which means removing your shoes and letting those toes wiggle a little.