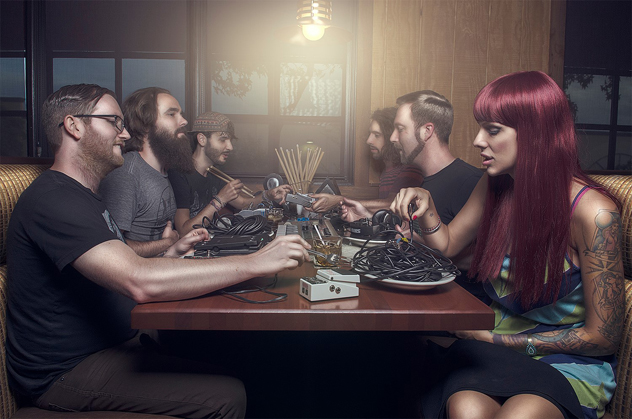 Local indie/experimental band Saint Solitaire is easily one of the hottest bands in the local scene right now. If you caught their stellar set at Concerts in the Park a few weeks back, you know what we mean. Their sound is fresh, blending clean, noodle-y guitar lines with danceable, groovy rhythms and electronic elements (synthesizers, samples, turntables, etc.), and they bring all this together live with an elevated level of energy that to be honest is missing from a lot of local bands’ sets these days. Bandleader Andrew Barnhart first got Saint Solitaire on our radar last year when they released their debut EP Full Artistic Control, which was produced and recorded entirely by Barnhart himself. Now the band (which includes members of other local acts like Ancient Astronaut and James Cavern’s band) is readying the release of their second EP, Versus Resistance, on Saturday, Aug. 16 at a backyard gathering they call “Summer Opus.” “We started the event last year and it was such a huge success that we decided to do it again,” Barnhart recently told Submerge in an email. “It’s an intimate backyard experience featuring six of Sacramento’s most talented artists, two comedians, a live painter, and we’ve got a keg of Sierra Nevada and other alcoholic beverages included in the price of admission.” Regarding the new material, Barnhart writes in the band’s bio that the new jams “take on a more edgy rock and dubstep vibe, two words I’m surprised to be validating the compatibility of by writing them in the same sentence together. I didn’t think they were, at least, not until now.” The Summer Opus party, happening at 3040 4th Ave. in the Curtis Park area, will kick off at 6 p.m., is 21-and-over and is $10 at the door ($5 ahead of time through Eventbrite). Other performing bands include The Denver J Band, Soul of Hans, Odamé, Ricky Berger and Adrian Bellue. Standup comedy sets will be provided by local comics Johnny Taylor and Daniel Humbarger, and the live painter on hand will be artist Michael Mikolon. For more information visit Saintsolitaire.com