Bring on the Night

The rise in popularity of symphonic metal and its many musical subgenres over the last two decades has been alarmingly substantial (to say the very least) both in the United States and abroad. Not only have many bands in the genre been catapulted into arena and stadium headliner status, the once-underground style has now become one of the strongest concert draws on the touring circuit.

Unfortunately, groups like Nightwish, Epica, Within Temptation, Delain, Xandria, Leaves’ Eyes, and many others get unceremoniously lumped together since they all have a lead female vocalist. Upon further inspection, however, it would seem the similarities of the aforementioned acts are also rooted in a melodic approach that takes cues from classical and progressive music.

Sacramento’s Graveshadow is one of the few female-fronted symphonic metal bands in the region to have successfully incorporated elements of gothic, black, thrash and even doom metal fare with great effect. Rather than sounding dated or derivative, the eight songs on their forthcoming record, Nocturnal Resurrection, show a band ready for the road and, more importantly, world domination.

Since their inception in 2012 by guitarist William Walker, the group has become one of the area’s strongest and most consistent headliners and have already signed a deal with Belgium-based boutique record label Mausoleum Records. The label was founded in 1982 and previously released albums by Voivod, Anvil, Nazareth, Omen, and has many other heritage rock acts and newer signings.

Whether you’re into brash screams or soaring vocals, standout songs like “Exhumed” and “Namesake” offer something for everyone. From mid-tempo rockers laden with keyboards to plodding guitar riffs that complement a wholly able rhythm section, this is one band that has benefited greatly from a twice-a-week practice regimen.

And while the group has no immediate plans to leave the area, it would seem they are poised for bigger and better things outside of our fair city.

Submerge caught up with vocalist Heather Michele, keyboardist Valerie Hudak and Walker to get the skinny on Graveshadow’s new album and more.

It seems your album is already out overseas. What is the exact street date of Nocturnal Resurrection and why did you choose your current label over doing things yourselves?
William Walker: You are correct. It was already released back on Nov. 13, 2015, in Europe, but it will be available everywhere starting on Dec. 13. Oddly enough, a friend of mine named Norman Skinner was in a band called Imagika that toured and were on the label. When I knew they were signed, it made me feel really good about the label since it seems they had a good experience. We are signed for one album and the label has an option to release a second album if they want to. We are fully committed to this album since we spent much time, effort and money to make it. The album was mixed and mastered by Emil “Nightmare Industries” Nodtveidt from Sweden. He is also currently the guitarist of Deathstars who shares the same management as us—Jeff Keller Management. It worked out really well, and we couldn’t be happier with the results.

What about bonus tracks? Surely you’ve recorded some extra tracks to use later on.
WW: Actually, we only recorded the ones you hear on the new record. We went into the process with the idea of recording just these songs and nothing more. Our drummer Roman Anderson and I tend to write all the rhythms together and thought it best for consistency. Consequently, all of the rhythm guitar tracks you hear were recorded by myself and the leads, of course, were done by our lead guitarist, Matt Mitchell. However, all of our songs are very collaborative since everyone adds something.
Valerie Hudak: We have a couple of different remixes of “Blood and Fire” we were thinking about using for digital download cards. Unfortunately, we had no extra songs on the record. It is something we thought about doing later on. Currently, we’re focused on writing even more songs for the next record.

Which song or songs are your favorites?
WW: I really like “Namesake” since I wrote and arranged all the guitar and the lyrics. I love playing that song. It was a very emotional song written after my grandfather died and deals with some of the issues I experienced afterward since I’m also named after him.
VH: I really like “Namesake” as well. I like the construction of “Namesake,” which has some really good riffs in it and “Winter’s Come to Call” as well. The most difficult problem I encountered while recording was dealing with all of our many tempo changes, because we’re really a live band. When you do a studio recording, you have to set the rhythm, set the click and play to it. You really have to give a perfect performance, unlike a live show.
Heather Michele: I would say “Lycan Lust,” which was a tricky one to finagle around. I was given a sheet of paper with what the song was supposed to be about. As it turned out, I liked some of the notes, but I wanted to phrase things differently and change things around. It was one of the most difficult to write but ended up being one of my favorites.
How did the band originally meet? Please don’t tell me Craigslist.
HM: [Laughs] It was a Craigslist ad. I talked to Will initially. The founder was Will and another member who is no longer in the band, whom we haven’t spoken to in quite a while.

Where have you played outside of the area and what plans do you have for 2016?
HM: We’ve played Reno and we played Hollywood a couple of times. We originally played with Edge of Paradise and have been getting shows in Southern California through promoter Metal Sanaz.
WW: We don’t have an agent overseas yet, but we do have a national tour booked that’s not announced yet. Unfortunately, I can’t say who it is, but it is a short tour with a well-known national act and another one of our favorite bands. We’re opening first of three. Also, we now have a proper booking agent here in the States named Andrew Roesch, who also works for Artery Foundation. He will start working us and booking stuff the beginning of next year. From the conversations we’ve had with him and our manager, we all decided the band wants to simply play out-of-town markets opening for national acts. Later on, however, we’d to like start touring nationally after we’ve built up something.

Which bands are you fans of whether regional or local?
VH: We really like Crepuscle. They are really good melodic death metal from Redwood City. They are also playing our CD release show.
WW: Astral Cult are a great band from Folsom, and they’re also playing our Boardwalk show. I also like a band called Blessed Curse. We just recently played a show with them as well, and I was really impressed.

What do each of the members do for work during the day?
WW: I work at Apple on the Elk Grove campus, our drummer Roman Anderson sells car parts, lead guitarist Matt Mitchell does political analysis and our bass player Ben Armstrong works at a plant nursery.
HM: Valerie and I actually work at the same company at different locations. We’re tutors for kids with autism from 2 to 6 years of age.

What is the end goal for the band?
WW: I have been playing in bands since I was 13 years old. All I ever wanted was to make a living off making and playing music. I would totally quit my job.
VH: I totally feel the same. We are 100 percent into this. I would really like to make Graveshadow my only career.
HM: I would just like to make a living working part-time and be in a band. I take it back. If I could work at Starbucks, be in a band and be self-sufficient, I would totally be be good.
WW: Heather’s idea is my fallback plan.

Mausoleum Records recording artist Graveshadow will host a CD release show at The Boardwalk located at 9426 Greenback Lane in Orangevale on Sunday, Dec. 20, 2015. Tickets are just $10 in advance. Crepuscle, Zeroclient, Conceived in Chaos and Astral Cult open the all-ages show. Doors at 6 p.m. and the show starts at 7 p.m. 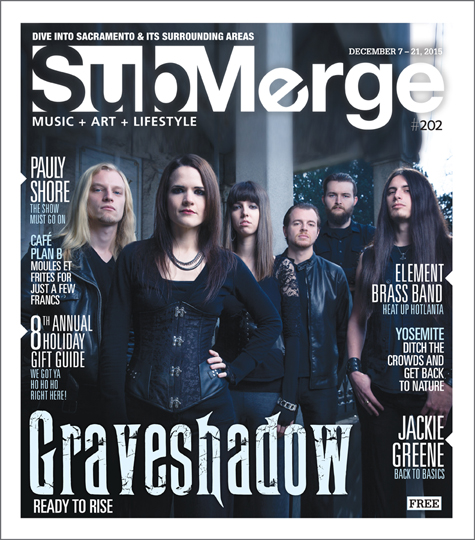