There’s No Place Like Home • Local Natives Embrace Their Roots on Their Latest Album, Violet Street 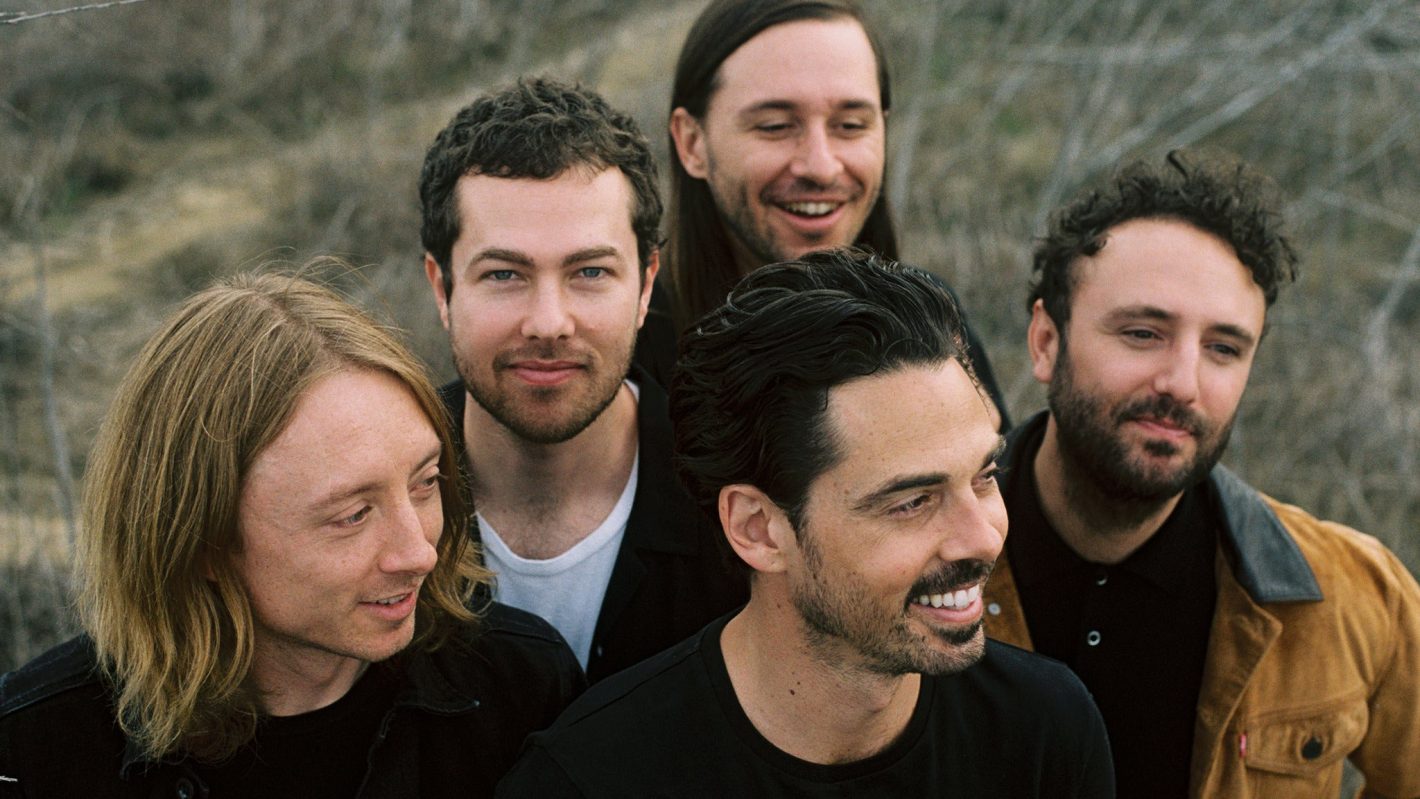 Picture yourself driving down the Pacific Coast Highway from Malibu to Santa Monica on a lazy Sunday afternoon. You’re driving in a classic convertible. You have the top down. There’s no traffic (hey, it’s a fantasy). For this idyllic scenario, you’d be hard-pressed to find a better soundtrack than Local Natives’ most recent album, Violet Street.

Local Natives has been tagged as having a “Southern Californian” sound since they started touring for their debut album, Gorilla Manor, back in 2010. Ryan Hahn, who plays guitar, keyboards and contributes vocals as one of the band’s three chief songwriters, acknowledges that this is especially true on Violet Street, released this past spring.

“At a certain point, you get a degree of self-awareness about it. I think in the past we’ve tried to push back against it, but in the past few years, we’ve really learned to love where we come from and embrace it and how natural it feels,” Hahn says. “With the music we make, that’s just how it comes out.”

When we spoke to Hahn, he was just pulling up to the recording studio. He and the band are back at work, this time with Chris Coady, who has worked with Yeah Yeah Yeahs and TV on the Radio in the past. Hahn says they’re working on songs that the band has always liked, but didn’t finish in time for their last two albums (Violet Street and 2016’s Sunlit Youth).

“We’re in this mode of not just wanting to do the normal album cycle and just wait to do a full album,” he explains. “We want to record songs as soon as we’re able to and kind of feeling it, so that’s what we’re doing right now.”

Hahn says that he’s not sure how this material will be released at the time of our interview. He says it could be as an EP or a stand-alone single, but he and the band are open to experimenting with the way they release music.

“It takes us a little bit longer to make music just the way that we work and the way that we write—being so democratic and everything,” Hahn says. “We’re just trying to do songs that feel right and try to capture them in the moment and not having to hold them for a long time.”

I’d read that you’re all very collaborative with everything that you release.
We’ve come to realize that … it’s something that makes our band unique. For something to get through all five of us, it has to be something that we’re all stoked on, whether it’s music or artwork or video. Everything is a democratic vote. Taylor [Rice, vocals/guitar], Kelcey [Ayer, vocals/keyboards] and I, we write the songs, and Nik [Ewing] and Matt [Frazier] provide bass and drums [respectively] and we add keyboards and stuff in the studio, but it originates with me, Taylor and Kelcey individually, and then we get together. There’s a little healthy competition, a little trying to one-up each other but also just collaborating.

Sort of related, but I just went back to grad school, and I was talking with my wife beforehand and expressed how worried I was that everyone was going to be smarter than me, and they are, but it’s not at all intimidating. It just makes me want to learn more.
That’s a great way to look at it. We were just in Amsterdam and someone came up to us after the show—he might have been buzzed or something—and the guy said, “I’m in grad school, and I would love for you guys to come in and give a talk.” He was like at Harvard and visiting Amsterdam. He was like, “I want you to come in and talk about collaboration and what it’s like working in a group dynamic,” and we were like, “Oh yeah! For sure!”

The core of the band has been writing together for some time now. Do you kind of know where each other is going, or do you actively look to throw curveballs at each other, so to speak?
I try to bring some curveballs into the band, and I don’t want to speak for the other guys, but we know each other so well, sometimes it feels good to box someone in. Like, I know what they’re going to bring, and I know what I’m going to do with the song, because we know each other’s strengths. I love doing lyrics—I feel like we can all bring something to the song.

You were in Europe for all of September and some of October. How did the tour go?
The tour was great. It’s always interesting, because we don’t get over there as much as we’d like. We love touring the United States. It’s great seeing the shows grow, and the interactions. People seem to know the albums super well, but when we go to Europe, there are just different customs at shows, the way people interact with music in a live setting from country to country is so different. You can do the same show we play in the United States and have a very different energy in the room … It was a very interesting time. We were really psyched to get over there.

You mentioned people country to country reacting differently to the music. Can you think of a specific moment when that really jumped out at you?
In the bigger cities, in Berlin, you get people going wild for the more uptempo songs, but then when we were playing in Scandinavia or even in Paris, when we were playing the mellower songs, people were more quiet and respectful but very responsive when the song ended. The United Kingdom is a different beast altogether. One of my favorite shows of the past year was in Manchester. We just kind of showed up toward the end of the tour, so we were all really exhausted, but that show was just bonkers. It was the rowdiest but most enthusiastic crowd. It was just a really fun show.

Manchester has always seemed like a great town for music.
I’ve grown up listening to Oasis, The Stone Roses, The Smiths. When we first went over there years ago, I felt like I was going to run into Noel Gallagher in the streets or something. I was like, “I can’t believe I’m in Manchester!”

I wanted to ask you a couple of questions about your recent music videos, because in one, you’re not in it at all, and in the other, I think the band is featured constantly. “When Am I Gonna Lose You” features Kate Mara—who I think is really underrated as an actress—and since you mentioned the band collaborates on everything, how much input did you have as far as working with the director?
We’re definitely hands-on when it comes to the videos, but the difference being none of us know how to make videos. We’re kind of at the mercy of whoever we’re working with. When we met Van [Alpert], the director, his enthusiasm, his vibe and energy—we really got along. It’s not like we have the biggest budgets when it comes to videos, so we have to be really creative with what we’re doing. We also had an idea of connecting the worlds in those videos. If you look closely, we’re actually in the very beginning of the “When Am I Gonna Lose You” video; and if you look closely at the end of the “Café Amarillo” video [also directed by Alpert], you’ll see footage from the “When Am I Gonna Lose You” video playing in the background.

Oh, wow! I didn’t catch that.
We did them so close to each other, on back-to-back weekends. Videos are always hard, especially if you’re going to be playing in the video, you need to make it look interesting and not just the normal band performance. We were out in the desert, and believe it or not, it started snowing during that shoot. It was so cold. Some guy had a flamethrower, and he was melting ice off the stage because it was so slippery. That whole video was just a crazy 24 hours of being out in the desert. We got to borrow some really cool vintage cars. It was just really fun. It felt like they also captured the aesthetic, visually, of the album. They kind of lived in the same world of our album’s artwork, and we’ve always strived to have a cohesive aesthetic within an album cycle.

See Local Natives live, along with a killer lineup of bands, at Alt 94.7’s Electric Christmas on Friday, Dec. 6 at the Golden 1 Center in Sacramento. Also performing will be The 1975, The Head and the Heart, and Catfish and the Bottlemen. Tickets start at $40. To purchase them online, go to Alt947.radio.com.