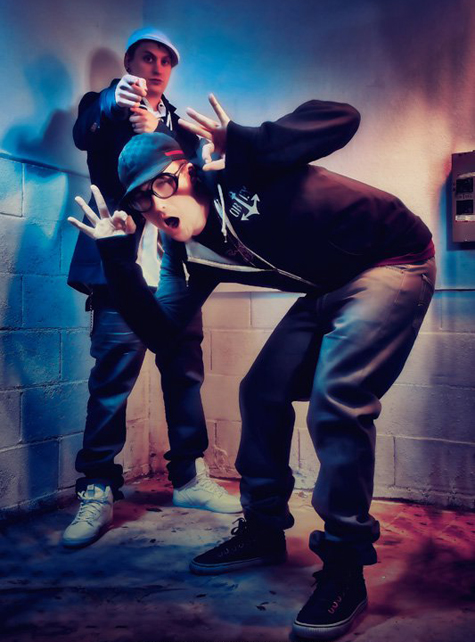 Six years ago is a different lifetime as the body approaches 30 years of age. Marinate that sentiment with hip-hop’s culture in motion and an artist could risk making music on the wrong side of retro. Grass Valley’s Lostribe could have stuck to its 2005 script, but with personal growth comes valued artistic growth and even rebirth.

Lostribe began as a crew consisting of three producers and one MC. Its debut could be considered rapper/producer Agustus ThElefant’s solo Sole Expressions in 2005, which featured production from Lostribe producers JustLuv and MLB. The group went through a series of tribulations after that record, but still managed to bounce back with a video game soundtrack deal in 2007.

No Other Word featuring: Talib Kweli, Maryann HUnter, N8 the GR8 by JustLuv

Members JustLuv and Agustus were asked to score the Namco Bandai video game Afro Samurai, featuring Samuel L. Jackson and RZA. The duo scored 10 tracks on the game. Meanwhile, JustLuv remained busy by breaking into the Bay Area rap scene to produce tracks for Andre Nikatina, Mac Dre, San Quinn and Mr. FAB. The growth would prove invaluable to Agustus and JustLuv, even if it distracted them from following up on their personal efforts. MLB is on hiatus from Lostribe crew, only making an appearance on one track on Sophie, the band’s latest album, which will be released on Aug. 23. But JustLuv assured me he had good reason for the absence, “He recently had a baby.

“So he’s focused on being a father and building that life,” JustLuv said. “He’s got a lot on his plate right now. I made it a point to include him on at least one track. He has a hard time getting out to the studio, living in Grass Valley and we recorded everything in Sacramento. He’s working, trying to get that money for his family.”

With Lostribe down to two core members, JustLuv manned the boards for Sophie, a record that meshes the lyrical dexterity of underground hip-hop in the early Aughts with the modern warble of dubstep’s woofer-blasting sound. Musicians out for the dollar and the relevancy can’t afford to take a five-year hiatus, but JustLuv talked of the extended process as a necessity that earned Sophie its coveted title.

Why the long hiatus between records?
A lot of life and shit happened. Agustus got married and moved away to Santa Cruz with his wife. They were down there for about a year and a half. He ended up getting a divorce shortly and moved back up [to Grass Valley]. I was going through a breakup at the same time, in between houses, and living situations were not very stable. I was like a gypsy living out of my car for a minute.

Life happened and we had to regroup. Then, in 2007 we started working on the video game, going through negotiations with those dudes. It took up a lot of our creative focus. So around 2009 we got our focus back with Agustus moving here. But again, it took time because we were going over material that was really old and we had some new material, so there was gaps between the sound quality and progression of the sound. We kept evaluating shit to try and refine our style. This last winter was when it finally came together.

The sound is definitely caught up to speed with its dubstep influence, while maintaining an organic feel closely associated with hip-hop.
That’s become my thing. Around 2006 that fool Agustus brought me to Burning Man and introduced me to dubstep. I was kind of into electronic music, and I used to break dance when I was a teenager, so that sound to me felt like the missing element into the synthesis of hip-hop and electronic music.

With the absence of MLB, you produced nearly the entirety of Sophie. How did you approach the opportunity to have full creative control over the sound?
That’s kind of how this project started out. I was making these new beats and my homie in Oakland heard them and said I’d kind of arrived, so it was time to put some shit out with this sound. So originally the focus was a solo project.

When it came down to me making this project and N8 [the Gr8 from The Cuf] started plugging these beats and Agustus heard it and said the shit was dope. We just decided to do a Lostribe album. It was a lot of hard work, but at the same time it was the most fulfilling and creative thing I’ve done. I tried to make a couple anthems. Try to make some shit that gets stuck in your head.

Why did you name the record Sophie? Because the first thing that comes to my mind is the old Jaz record with Jay-Z called “Hawaiian Sophie.”
I’m almost 30 years old. A large percentage of my friends are getting married or having kids or tied down in committed relationships. I don’t really have none of that shit. So, Sophie is the name I’d have given a daughter. So this is my firstborn. That’s why I named it Sophie.

You hear a lot of musicians talk about their records as their babies. That’s cool that you took that concept to a literal sense.
You know, I was kind of laying in bed the other day and realized everything I’ve done from making money, places I’ve lived, friendships to an extent… Everything I’ve done to gain momentum in my life for the last 10 years has been out of this music. So I’ve put my entire grown ass adult life and heart and soul into this album. So really I couldn’t call it anything else.

You went to boarding school as a youth. And recently you had a nephew get into some trouble, which prompted you to write the song “Live Like a Rebel.” I was wondering if he’s heard the record and if it had an impact on him?
No. I’ve not played it for him yet. He is more into rock music. He gives me a teenager response to everything, which is, “That’s cool.” He’s still 16. I can only live by example and try to show him what’s what. At the same time it is hard for me, because I still do young shit like go to the bar and get drunk. It’s kind of a paradox. I had a really deep conversation with the kid three or four months ago and then the next day he told his dad he figured it out and he got it. Then, the next day went out with his friends and did hella crazy shit. I can’t be mad though. The shit I was doing when I was his age was way worse.

Lostribe’s Sophie is available now in stores and through iTunes, Amazon and other online retailers. The album features guest appearances from Gift of Gab, The Grouch, Talib Kweli and others. Lostribe will perform at Sol Collective on Friday, Sept. 9 with Los Rakas, Danked Out and more. Hosting the event will be Mic Jordan. For more info, go to Lostribeproductions.com