Loving, and the Times We’re In 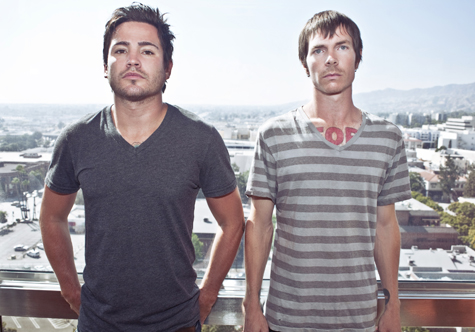 Guy Debord, the pivotal member of the French art collective known as the Situationist International, once graffitied Paris with the slogan “Never Work.” In his book Lipstick Traces, Griel Marcus ties the SI as the real precursors of the punk-anarchist tradition. In a related way, Middle Class Rut embodies an angst that directly confronts the conditions of our world. Zack Lopez (guitar/vocals) and Sean Stockham (drums/vocals) use their songs to take swings at the monotony of the working class experience. It’s imbedded in the lyrics of songs like “Lifelong Dayshift” where both members double down on the chorus to create a throat-thick hook reminiscent of Filter: “Your life/It ain’t worth wasting mine on. I won’t accept that every day/Will just be thrown away.” A sentiment that anyone who’s ever had a miserable job can identify with. Lopez and Stockham don’t stop with lyric sentiment; they crank up their sounds to ear bleeding and make sure that their message gets loudly through to the audience. That message isn’t directly anarchist but is closely related via the spirit of DIY. Angry at the prerequisite struggle built into DIY, MC Rut’s debut full-length album, No Name No Color, becomes an example of a hard-wrought self-made body of work. Operating independently (self-recorded, self-produced), MC Rut is succeeding at making things for themselves and that ever-elusive ability to be happy doing it.

MC Rut met with Submerge at a Starbucks on Madison. Without an interior for customers to sit in, it was a fitting example of our service economy. We drank coffee over the squeals and rumbles that signify our ever-fluid social relations, and here we discussed their jejune flirtations with a major label, family and their recent tours with Alice in Chains, …And You Will Know Us By the Trail of Dead, Them Crooked Vultures, The Bronx and Social Distortion.

“It’s cool to go out and support a band like Alice in Chains, just for the opportunity to do it,” said Stockham.

“And that was huge for us,” added Lopez. Thankful for the opportunities, MC Rut is ready to branch out on its own. Anxious to reap the benefits of their own labor, Lopez gets adamant about headlining. “We’d rather headline basements,” he said, “and have everyone there for us than go out on another support tour. We’ve been an opening band our whole life.”

“When you’re 16 or 17 you get so excited to just get out of your hometown,” said Stockham. “The first couple of tours we did when we were younger, it wasn’t about how many people showed up or how much merchandise we sold, it was about the fact that we’re in a van driving across the world. Then we got a little bit older and had kids, and we didn’t want to do that shitty van tour anymore.”

“And we still did,” nodded Lopez. “We were thinking we just got to pay our dues. It’ll happen.”

Their previous group, Leisure, disbanded in 2004 after years of hype and little to show for their efforts. “It wasn’t until we got honest again that we started going anywhere,” said Lopez. “Getting in a record deal and being in a certain situation, you think that you can fool people. It just doesn’t pan out that way. Money was a joke then. If you knew the right person, they were just handing it out.”

Stockham added flatly, “The industry has been flipped over.” While things have changed dramatically for both major labels and bands, MC Rut is still able to take advantage of their connections to the majors. “[Our label] Bright Antenna still gets to operate the way they want to. They hire their own radio person, we hire our own artwork, together we pay for everything, but ILG and Warner make sure [our stuff] gets out everywhere,” said Stockham.

And, in case our readers haven’t been paying attention, MC Rut has been everywhere. They were getting radio play on KWOD 106.5 before the station changed formats, and their CD release Oct. 8, 210 at the Boardwalk is getting attention as one of Radio 94.7’s $9.47 shows.

Yet despite this recent success, MC Rut is doing something a little different than many of today’s popular bands. Embedded into their songs, into their angst, is the late ‘90s feel of Jane’s Addiction, Rage Against the Machine, Filter and a punk rock attitude.

“You’re kind of discouraged nowadays from even being a heavy band,” said Lopez. “Especially with the indie scene how it got so big. I couldn’t be less cool showing up to the club with the rig that I have. That’s just who we are at heart. We’ve always just loved really honest, energetic, really heavy loud music.”

“We can easily feel outdated,” seconded Stockham. “Depending on what part of the world or what show we get thrown onto at the end of the night. Heavy music is still really big. Active rock, Disturbed, Godsmack–that shit is huge in the middle part of America. But when you go to London and you’re playing the hip cool place, we’re not playing to Disturbed fans. We’re playing to people who like Vampire Weekend, and that’s the scene we’re talking about. We feel like we can’t relate to them, and they can’t relate to us.”

“We wish that this band could be in the old Sacramento scene,” said Lopez. “You couldn’t beat that scene back then. Now there’s no central place, the downtown scene is totally different.”

While the places have changed, the lifestyle hasn’t; and MC Rut is a testament to the difficulty of overcoming the systemic necessity of day labor. Both members have kids and homes to support; yet they constantly sacrifice family time for music. “If you love what you’re doing that should be what you’re doing,” said Lopez. “It was a lot harder for me personally, working and existing as a normal guy, being someone I wasn’t. I was building houses in Los Angeles. That was way harder for me than it was to leave my family and go out on the road to do something that I loved. If I’m home and I’m miserable because of my job, I’m just treating everyone like shit anyways. You can burn months, years even, in a certain routine. Just stacking time against yourself.”

“I didn’t even get my high school diploma,” revealed Stockham. “Like, ‘I’m going to be a rock star at age 19.’ When that didn’t work out and you’re forced to get a job, it’s factory work. In a funny way we want to have the stability of a 9-to-5, just playing music. Health insurance would be dope.”

Like too many Americans, MC Rut has to juggle their work with their livelihoods, sometimes at the consequences of self-preservation. When it’s not weighing down their bills, this tension manifests itself in the track “One Debt Away.” The chorus is a simple affirmation: “Be glad/To be home.” The first half is belted out with all the angst discussed above, the second half declines into a less tenuous space, the melodic thought of domesticity.

“We haven’t been to the doctor or the dentist in like 12 years,” laughed Lopez.

“There are times where it’s just an emergency, and it becomes this really expensive thing,” said Stockham. “My credit is fucked, because I went to the doctor one time and didn’t have the money to pay the bill. Hopefully things will change.”

For MC Rut things have changed; they’ve finally put together an album full of momentum. It’s time to reveal it to the people. “It’s nice to have officially put out a record,” said Stockham. “Now we can just move on, go out and play as many shows as possible.”