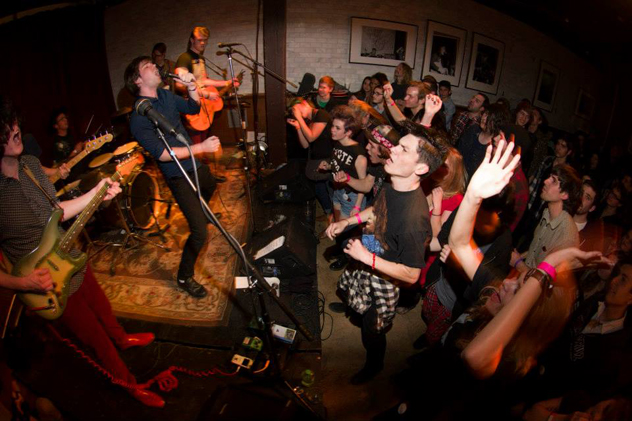 Photo of The Kelps by Dennis Scott

Luigi’s Slice, a hip pizza joint in the MARRS Building that for years has also acted as one of Sacramento’s few all-ages music venues, has been sold to the owners of Azul Mexican Food and Tequila Bar, located just steps from Luigi’s in the same building. The space will close for about three weeks starting on May 17, 2014 and will undergo renovations. It will remain a pizza place under a new undisclosed name, but it is uncertain if the new owners will continue to host live, all-ages shows.

“It’s heartbreaking about the uncertainty of the new owners doing music,” Luigi’s co-owner Linda Brida (she runs the business with her husband, Greg) recently told Submerge. “I’m going to talk to them more about it.”

Brida mentioned that while it’s a bummer they have to sell, it is something they’ve been mulling over for some time. “We’re a mom and pop shop, and we treat our employees like family,” she said, noting how important it was to them that most of their employees be re-hired by the new owners. The Bridas still own the original Luigi’s Pizza Parlor located at 3800 Stockton Boulevard. It’s been in their family for 60 years.

Local promoter and music scene OG Jerry Perry, who frequently throws all-ages shows at Luigi’s Slice featuring both national and local acts, wrote an honest straight-forward post on his Facebook page on April 12, 2014, about the closing of Luigi’s and the uncertainty of live music happening there after the switchover.

“I consider little ol’ Luigi’s to be one of the most important rooms in the Sacramento scene,” he wrote going on to say “Sacramento may not know it yet, and actually rarely ever understands the impact of changes such as this, but losing this venue will create a huge disconnect between young people and live music in the scene, and forces so many young local artists back to playing stageless coffeehouses, or bullshit pay-to-plays, maybe occasional house-parties, or nowhere at all.”

Submerge attempted to reach out to one of the owners of Azul but did not hear back as of press time. We reached out to Perry to see what he and others have lined up at Luigi’s before May 17, and it turns out it’s a stacked next few weeks of awesome shows, so get out and support while you can! Check it: Circle Takes the Square on April 25; The Kelps on May 3; Sun Monks on May 9 with The Horde and The Harem; Kurt Travis (of A Lot Like Birds) on May 14; and The Dollyrots and Slime Girls on May 17, which may be the final night of shows. Perry also told Submerge that he’s adding more shows to that list and that he plans on reaching out to the new owners to speak with them to discern the future of all-ages shows. We’ll keep our readers up to date as we learn more about the fate of the venue.