The Evolution of Mahtie Bush

Sacramento’s hip-hop provocateur lives a family life in the burbs, but maintains his hunger

Although it was several years ago, it seems like just yesterday that rapper, producer, MC and B-boy Mahtie Bush founded the highly charged Sac Hates Hip-Hop movement—a knee-jerk reaction to Sacramento clubs and radio stations that had almost overnight turned their backs on rap music. And just as quickly, Bush showed up in every local paper, spewing his dissatisfied version of a “state of the city” address.

Well times sure do change. Don’t get me wrong, Bush is still just as hungry as he ever was, but these days his tactics are drastically different. No longer does the MC strive to be the city’s poster child for raising hell; he simply wants to flex his healthy work ethic and, of course, his music. Take Bush’s latest mixtape, Hate is Love Part II, for example. The body of work displays an MC who hasn’t let up. The beats bang with struggle, the lyrics resonate with purpose and it doesn’t hurt that the mixtape is hosted by the notorious DJ G.I. Joe (Immortal Technique), who leads the listener through a 13-track tape filled with hardcore bangers, crafted strictly for rap purists.

From troublemaker to workaholic, it’s been fascinating to track the progression of Mahtie Bush, whose only constant seems to be his unpredictability. In fact, the only thing we can be sure of is that Bush won’t go away.

When I caught up with him, Bush had just gotten home from work and was sprawled out with his wife in the luxury of their new, suburban Natomas home. Yup, it’s some American Dream type shit; some I wear a silk robe when I get home from work, so fuck you kind of stuff; an I buy organic kale now, fool, what now?! type scenario; an—ah, you get the point. Whatever Bush is now is a far cry from that poor-ass, frustrated, jumpy Mahtie Bush I came to know seven years ago. But he still has a lot to say, plus he’s got some sort of super important, hushed, top-secret project on the way.

What are you doing right now?
Right now I’m looking at dogs with my wife online.

You guys are dog shopping?
Yeah, I want a pit—a bully. A small one.

Settling down, getting married, looking for a dog…does that change the way you rhyme?
It doesn’t really change the way I rhyme. I feel more at ease now. I don’t know what everybody else’s definition of success is or what their definition of making it is, but for me, it was having a house, having a car, having a yard, having a wife… I don’t have to go to a one-bedroom apartment anymore and feel like I’m boxed in. I’m like, “Fool, I got a house!” I’m on some grown man shit now. I got a mortgage payment. I look at rap totally different now.

You’re not going to start wearing sweater vests and singing smooth love ballads now, are you?
No. I did “Is She Out There?” and that’s as far as it goes.

Tell me about your Hate is Love Part II mixtape.
The first one I just did because it was after the whole Sac Hates Hip-Hop thing. I was still networking with Chino XL at the time and so I asked him if he’d host it… This second one, I wanted to revisit it because I really like how DJ G.I. Joe scratches. He’s a dope ass DJ.
So I wanted to revisit it and wanted to do more personal stuff. I wanted to talk about my family life and the streets I grew up on.

Has anything changed since the Sac Hates Hip-Hop movement?
No. Shit is still the same. Name a radio station out here that’s playing any locals besides 98 Rock. I think it’s worse now because we took radio for granted by having The Future Flava show and 103.5, but now we don’t have none of them and it sucks. I don’t give a fuck. What’s worse is that I’m older…and I don’t care.

That whole Sac Hates movement was fun though, right?
It was fun to a point, man. Some of it was annoying. Some of it was cool. I wouldn’t change anything but maybe who I associated with at the time. I had people spray painting doors, like, “FUCK BUSH.”

Rap is so shitty right now. I hate it. What the fuck is wrong with rap?
I think it’s so bad that when you have somebody mediocre, you just attach yourself to him, like, “Yeah, this dude is the shit.”

That’s what I’m saying. Exactly.
I don’t really listen to everybody. I do like Kendrick Lamar. I wish Jay Electronica would have came out. I don’t know what happened with him. I like Odd Future at times.

Yeah, when they have a good song it’s really good, but they have a million bad songs.
There’s this dude and I can’t think of his name right now—a fat white guy from Queens.

Action Bronson?
He’s so dope to me. Action Bronson just shitted on people, yo. Everybody’s giving hype to this other kid from New York, but I think Chuuwee is killing him. I think he actually bit Chuuwee to be honest.

Joey Bada$$?
Everybody loves Joey Bada$$. He’s alright. Chuuwee will smoke that fool. That’s it, though. I like Tech N9ne. I like Immortal Technique. I like grimy-ass hip-hop—the “fuck you” hip-hop. Chino XL is my favorite rapper, so it is what it is.

Do you ever worry about growing old in hip-hop?
I don’t care about that shit. I feel like my reason for getting into hip-hop wasn’t because I wanted to be young. This is a young man’s sport, I get it, but…you can be an artist until you’re however old you want to be. Do what you want to make yourself feel happy.

I mean, Krs-One is pushing…what, a 100 years old?
He’s still touring and selling out shows. And people are still scared of him. I dare you to battle Krs-One.

So what other projects do you have coming out?
I’ve got a project with my group Alumni finally about to drop, most likely in the summertime. Even before that I have an EP that I’m doing. The EP is, um, can I tell you off the record?

Mahtie Bush will perform with Century Got Bars on April 26, 2013 at All Stars Sports Bar in Woodland (102 Main St, Woodland, Calif.) and then again on April 27, 2013 at the Sactown Underground/Freestyle Session Nor Cal B-boy jam, which will take place at the Old Sugar Mill (35265 Willow Avenue, in Clarksburg, Calif.) The event gets underway at 3 p.m. and tickets are $10 pre-sale/$15 at the door. Tickets can be purchased through Freshandflyproductions.com. Download the Hate is Love Part II mixtape at Mahtiebush916.bandcamp.com or check with Thisizbush.com for more info. 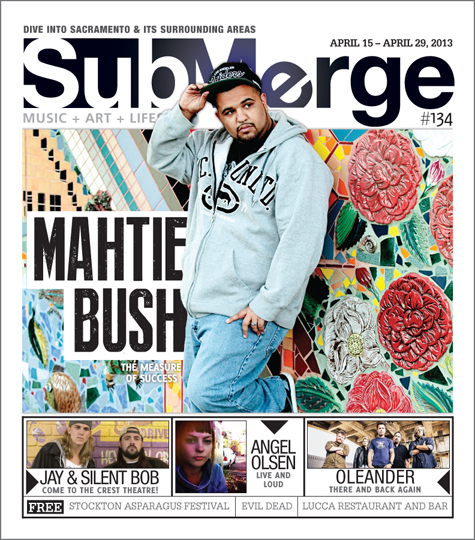