Making the Most of Time

Through Many Changes, The Quality of Pelican’s Music Remains Constant

Since 2000, Pelican have planted a sturdy foothold into the soil of the independent music landscape. With sounds ranging from deep, atmospheric meditations to abrupt bursts of sonic onslaught, the mostly Chicago-based quartet have covered considerable ground since their inception and release of head turning debut EP in 2001. The dynamic and devastating track “Mammoth” reeled in listeners with its methodical, detuned open guitar riffs and bashing of crash cymbals, setting the tone for what would become a mighty career. They followed up with their debut full-length, Australiasia, which fortified their presence and quickly made them a household name—in cool households, anyway.

Expanding on their early career success, the group released their second full-length, Fire in Our Throats Will Beckon the Thaw. While still containing earth-shaking riffs, this record took a turn toward a more ethereal plane. “Autumn Into Summer” and “Aurora Borealis” would feature long, reverb-laden, delayed guitar segments, which provided a more ambient atmosphere, compared to that of their previous works. Meanwhile, 2007’s City of Echoes contained eight songs, all seven minutes or less; songs were becoming a bit more straightforward and chugged along like a steady locomotive train. This record defined a slight change in the group’s sound, and was also the final album put out on Hydra Head Records. In 2009, Pelican signed to Southern Lord Records and put forth their first effort, What We All Come to Need. Change and growth can be found within. At that point, Pelican had already made their mark with a signature sound of blending alluring harmony with mashing might. “The Creeper” takes you on a sonic ride of twists and turns. The swelling, distorted guitar from the introduction shifts to a glorious glide and then flares into uplifting triumph.

For the band’s fifth and most recent full-length, Forever Becoming, the pace have remained steady; with new guitarist Dallas Thomas in tow, the successful formula Pelican has adhered to remains present, but less space is wasted.

Submerge had the great fortune of catching up with guitarist and founding member Trevor de Brauw to discuss change, conditions and much more. 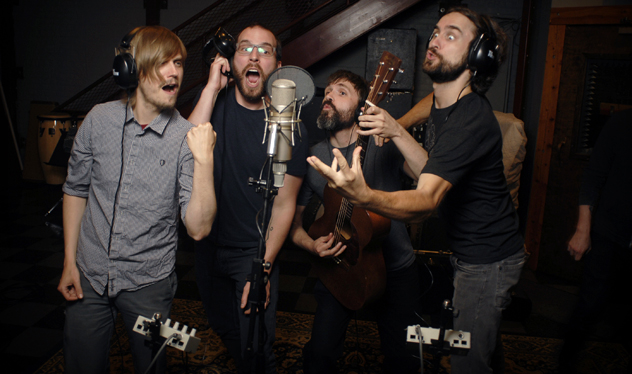 How have the times changed since the release of your debut EP?
We have gone through many changes over several phases of the band. When we released that EP, Pelican was a hobby and a side project to a band that Larry [Herweg], Laurent [Schroeder-Lebec] and I were doing called Tusk. We were writing Pelican songs on the side and then the band began to resonate with people, took on a life of its own and introduced music to us as much more than a hobby. There was a point where the band grew faster than we had anticipated and it became a professional aspiration; we were glared with the opportunity to pursue it almost like a job. Pelican became our bread and butter. Now we play purely for pleasure and for a creative pursuit, which is much more coherent.

Were you constantly touring earlier in your career and have you stepped back from that in recent times?
In the beginning it was very fun. We toured continuously from 2005 to 2009 for about four months out of the year; we treated it like a profession for several years and then hit a wall. The band took off for us when we were around 27 years old, when most people are settling down. As you get older, you start to ask questions like, “What am I doing with my life?” or, “What am I going to do when this dries up?”
The only way to sustain a living off of music is to spend an inordinate amount of time on the road, but none of us were really wired for it, so we stepped away. We then took stock of the band and tried to figure out a way to straddle the difference between the two periods where we knew it was more than just fun, but where it wasn’t the primary focus. We knew we had to rely on other ways to make ends meet.

Has getting older had an effect on what you’re doing now?
Before we didn’t have perspective on what was happening. When you’re constantly involved, it’s hard to step back and see the bigger picture. We were in a whirlwind and weren’t really aware of our surroundings or how precious everything was. Now we have a greater sense of responsibility for our music and our art that we can only approach when we have the time to do so, which is both limited and special.

Do you see yourselves as trendsetters?
I don’t know if we’re trendsetters. There was a natural thing that happened around 2004 or 2005 where a bunch of instrumental bands from disparate scenes caught the public notice and didn’t necessarily inspire a trend, but it raised consciousness of a style that could be pursued in the indie-sphere. Instrumental music came before us and will happen after us, but I don’t think it was or will ever be trendy.

Fugazi didn’t sell merchandise on the road. Is this something you can even imagine?
No. We have to make ends meet to justify the expense of going on tour and one of the ways we do that is by selling merchandise. I love Fugazi and their ethics. They existed at a time when they were able to make that work in a courageous and awesome manner, and I completely respect them, but it would be nearly impossible for a smaller band like us to maintain that due to financial burdens.

How was the transition from Hydra Head Records to Southern Lord?
It was good. Both labels are artist-run with Greg Anderson [Goatsnake] and Aaron Turner [Isis] being musicians from similar backgrounds within heavy and experimental music genres. There is a great understanding about where the artists are coming from. We felt like we’d done so much with Hydra Head and wanted to see what working with other labels felt like, so we checked out Southern Lord. With Hydra Head, we felt like we were part of a cult; so many of our friends were forged because they were label mates or tour mates, but the label was pretty free flowing and artistic. There’s less of a familial atmosphere with Southern Lord mainly due to the fact that they put out more music, but they’re more on top of the business side of things. It’s nice to be on a label that has all their t’s crossed and i’s dotted.

Did you learn anything new when writing and recording Forever Becoming?
For a long time we were crowding every inch of our music; we were taking up all of the space with a lot of notes. We learned how to build on what we’d done on the previous two albums by writing more progressive music, but making our music more spacious. Our newer music has less of a fatiguing feel due to the music being less crowded with notes.

Do you find it to be more unique playing abroad than in the United States?
I think it’s a different experience performing in city to city everywhere. That’s part of the appeal. One of the concepts that drove City of Echoes was that even though every place is different, there is a common love of music that bonds everything together. Music is an international language.

Are there any new bands or records you’re excited about?
This band called Nothing that we recently played with has a new record out on Relapse that is really great. I was able to check out the new Tombs album coming out in June and it sounds good. I don’t tend to get too stoked about metal, but there are a lot of bands releasing albums this year within the genre that I’m getting excited about.

Do you listen to any music that your fans might be surprised about?
As of recently, I started obsessing over a Weezer song from Raditude called “Can’t Stop Partying (Polow Version).” It’s produced by Jermaine Dupri, and has a vocal verse by Lil Wayne, which is bizarre because on the surface it seems like a typical club banger, but it’s in a minor key and the intonation in Rivers Cuomo’s voice is so desperate and dark. If you think about the title, it’s not a good thing. It seems he’s referring to partying as an addiction, so he’s glamorizing this partying lifestyle, but it’s a dark hole that can’t be escaped. Pelican fans might not assume that I’d be pondering over songs produced by Jermaine Dupri, but lately I’ve been thinking about this track a lot.

Pelican will play live in Sacramento with Tombs on June 16 at Midtown Barfly. Tickets are $12 and can be purchased in advance through Facebook.com/pelicansong. 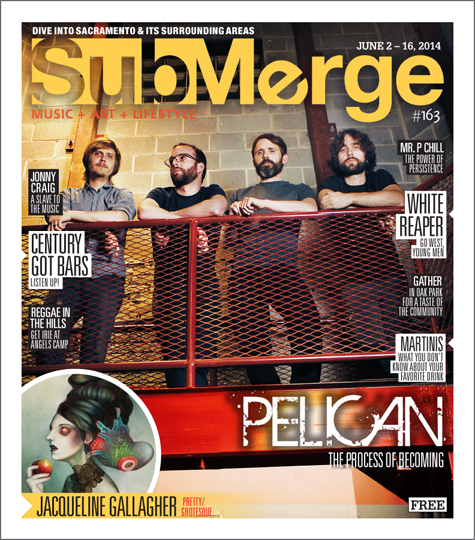