Male Gaze Outruns Ghosts of Projects’ Past on Excellent Debut

Despite the fact that Male Gaze is essentially a brand new band, their collective pedigree has afforded the group the opportunity for larger shows and bigger stages nearly right out of the gate.

“We’ve all been around and we know everybody so it hasn’t been too tough to pull off,” says bassist Mark Kaiser. His matter-of-factness isn’t meant to come off sounding boastful; it just so happens that the folks who make up Male Gaze have logged time in some of Northern California’s more ballyhooed underground garage bands, including Blasted Canyons (guitarist/vocalist Matt Jones), the notoriously anti-Internet Sacramento crew Mayyors (where Kaiser manned bass) and The Mall (drummer Adam Cimino).

The question could remain whether or not that makes the sum of their parts something to write home about. And while it’s tough to get anyone anywhere to write anything down anymore at all, you’ll probably want to at least mention Male Gaze to someone sooner than later. With the release of their seven-song debut album, Gale Maze, on John Dwyer’s Castle Face Records, the band’s relative secrecy is slowly fading.

Before the band recruited second guitarist Adam Finken (also formerly of Blasted Canyons and currently in Tiaras), Gale Maze was recorded in a flurry by the core trio, Frankensteining tones and mixing approaches from their previous projects—if perhaps unwittingly—into a bewitching, fuzzy brew, rich in homage to the likes of Joy Division (Jones’ vocals practically exhume the flat bellowing of Ian Curtis) and a cornucopia of post-punk tinkerers.

The cold truth is that Male Gaze falls into that awkward category of too-soon-to-be-written about, although they did release a 7-inch in July 2014, a precursor to Gale Maze featuring the fantastic tracks “Cliffs of Madness” and “Think Twice” via Kaiser’s Mt. St. Mtn. label. They’ve played a handful of shows between San Francisco (where Cimino and Finken reside), Sacramento (where Kaiser lives) and Los Angeles (where Jones lives). And they have a lot of touring on the horizon, including a set at Boise, Idaho’s Treefort Music Fest this spring.

Even amidst their fledgling nature, the fact that their album resonates so completely forces the hand a bit.

Gale Maze unfolds organically, slowly and somewhat curious of its sonic surroundings on the lead track “Smog Dawn,” unfurling washes of crunchy noise atop otherwise darkly plotted garage-psych. Careful consideration is given to the balance of melody and grime, and to riding hazy waves of echo-delay vocals on tinny wormholes of hallucinogenic rock. It’s a trippy ride, to be certain, and one not altogether uncommon, it must be said, especially for alumnus of the vaunted Castle Face. Where Male Gaze separates itself, however, is in their ability to revel in space-dark choruses and not always disappear into the groove of a 12-minute-long freakout jam cycle. That crevice of psych has its place, it just doesn’t fit within Male Gaze’s current oeuvre.

And while Kaiser’s aware of the band’s past being a talking point for its future, he doesn’t seem concerned with talking much about how it affects how people will perceive his new project. In the interests of articulating the building blocks of Male Gaze, though, he did spend time chatting with Submerge about some of it. 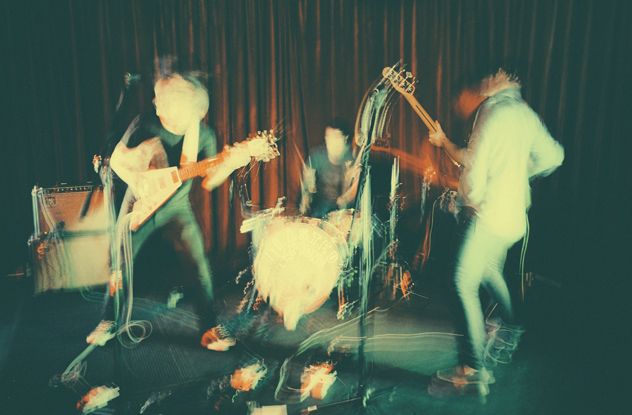 What can you tell me about how the band formed and what each of you were hoping to focus on with this project?
Basically, I was in the process of moving back from L.A. and I was talking with an old friend who was in one of the first Mt. St. Mtn. bands, The Mall [Adam Cimino]. He said he had a practice space and thought it would be awesome if we could jam there; he hadn’t been in a band in a while and was just kind of jumping in on people’s projects or recording with people or playing live here and there. We were just trying to get together and jam to see if we could come up with a concept. Once it started to solidify into feeling like we could totally play together—we had the space and kind of a loose idea of what we wanted to do—we started trying to bring people in. Blasted Canyons had broken up and Matt [Jones] didn’t have anything going on, so I reached out to him. He was someone I knew on the periphery because of Castle Face, who I know as business partners, and I was gonna put out a Blasted Canyons record a ways back, which ended up coming out on Castle Face. He came in and it sort of clicked.

There’s not a lot of material out there about your band, save for the mention of where the three of you came from, band-wise. I do know that the album sounds great though. Do you think it’s probably better that people take your band for what it is now and not for where it came from?
I don’t know. That’s what we’ve been mentioning too, because that just helps people put a face to the name. All those bands were pretty well-known at their time, so obviously we wanted to let people know who liked those bands that we’ve got a new thing going. With the Internet, we can get music out to everybody really quick. We had a single up online for a long time and it circulated a lot. Bios always drive me crazy. Trying to describe music is a painful process. Then it kind of falls into, “well, we sound like these bands” and then everyone names the same bands and we all kind of come from the same punk place of all the music from up here. There are no surprises here. We just wanted to keep things short and sweet. Let the music writers write about us.

Music-wise, do you feel like there are real strong links between some of your past projects?
Yes and no. We weren’t fumbling through those previous projects; they were pretty well thought-out and we were seasoned musicians and we’re older. I feel like those bands all had a bit of…we jelled into each of our own style of playing. We each have our own style of playing, style of writing, so naturally we just kind of shuffle the deck and sometimes there are elements that sound like Blasted Canyons, or sometimes mildly Mayyors-ish. It’s more in sounds and tones as opposed to how we’re writing, and certainly there’s Matt’s voice, which was all over Blasted Canyons. I feel like it’s a pretty radical departure from what we were doing before.

When you first got together and cemented the trio, you had a single up really quickly. That’s in pretty stark contrast to your previous band, Mayyors.
Yeah, I put it out on Mt. St. Mtn. originally, and then we debated. I’d just come from a band who was off of the Internet and really very well-hidden, but that’s not how these guys wanted to play. So we ended up putting the single up on Soundcloud, and I was gonna do that for the label anyway. We had that up and kept recording; it was still really early on. We took what we learned from that and started applying it to recording the whole set and finding out through mixing what we wanted to sound like. It took some time; we recorded and re-recorded a few times figuring out what we wanted to do, and we definitely mixed that record about 10 times. So there was a lot of fine-tuning; we were still pretty new and the set was pretty fresh and we’d only played a few shows. We were just figuring out how we wanted to sound. It’s more of a first attempt than anything, but we’re real happy with how it turned out. It was a good starting point to continuously evolve.

Male Gaze will be joined by Tiaras and Vasas on Sunday, March 29, 2015, at the Hideaway Bar and Grill (2565 Franklin Boulevard, Sacramento). This all-ages show starts at 5 p.m. For more info, visit Last.fm/music/Male+Gaze