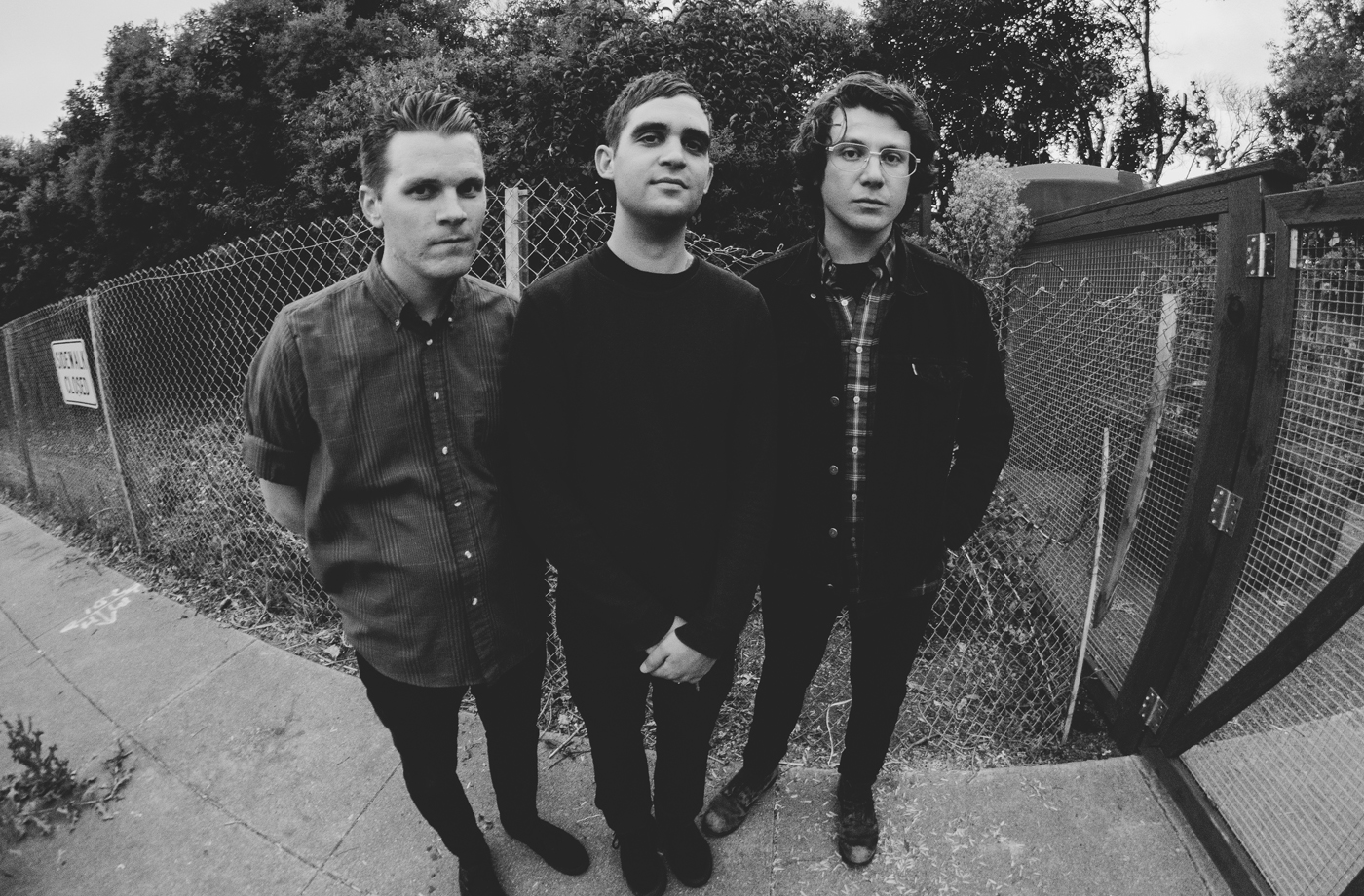 Mall Walk hails from Oakland, a place notorious for its struggles to cultivate an environment where artists can simply exist while also not displacing them in one of the most severely financially imbalanced areas in the country. So when the band was asked to play the Davis Music Festival, they empathetically jumped at the chance to contribute in raising funds for the youth arts programs in the Davis community. I spoke with frontman Rob Miller about his roots in music, and why arts are the foundation of a healthy community.

The Davis Music fest is an incredible three-day event that raises money for youth arts programs in Davis. This year’s beneficiary will be the Davis School Arts Foundation, which funds and celebrates art education in Davis Public Schools. Forty bands will be jam-packed into the mid-June weekend, and operate like our own condensed version of SXSW. So not only is this event incredibly fun, but it also raises funds for a vital purpose. Mall Walk was easily lured into playing the event by organizers who had heard them through KDVS.

Mall Walk frontman Rob Miller was born and raised in Cincinnati, Ohio, and at 15, moved to the Bay Area. “In the Midwest. I wish I had the opportunity to be involved in the arts. But the programs just weren’t available. They were always being cut,” said Miller. “Arts accessibility for the youth is super important. Arts programs are a great way for kids to get into music and be creative, and just a great way to spend time growing up.”

In the Bay Area, Miller became super active in music and began making connections in his community with other musicians like Nicholas Clark and Daniel Brown, who are the other two members of Mall Walk. Clark and Brown grew up entirely in the East Bay and spent time in jazz band at their public schools. Eventually the three of them hooked up to form Mall Walk in 2014.

Being an artist in Oakland, Miller says that though the community itself is supportive, the actual city is essentially shutting down DIY spots while also impossibly hiking up rents. “There is so much obvious tension there,” he says. “It’s interesting playing shows in Europe where they kind of have their stuff together and don’t make it so excruciatingly difficult to be an artist.”

Miller spent about three weeks in Europe recently touring with another band he contributes to. He said that he was incredibly inspired by the music scene in Europe and has made it a top goal of his to get Mall Walk over there.

“I can’t speak for everyone, but when I was in Europe some of the bands I was introduced to were really inspiring,” Miller said. “Lots of weird synth pop and ‘70s/‘80s Berlin. I was struck by the minimal sound because it is interesting with a lot of space.”

Mall Walk is a post-punk band with a sort of sneaky somberness to it. Their lyrics are melancholic and tinged with delightfully dark notes of the shoegaze persuasion. Their music feels meaningful, emotional and slightly punk.

They have adopted the term “punk furniture music” as a way to describe themselves from the backhanded folks over at Maximum Rocknroll. 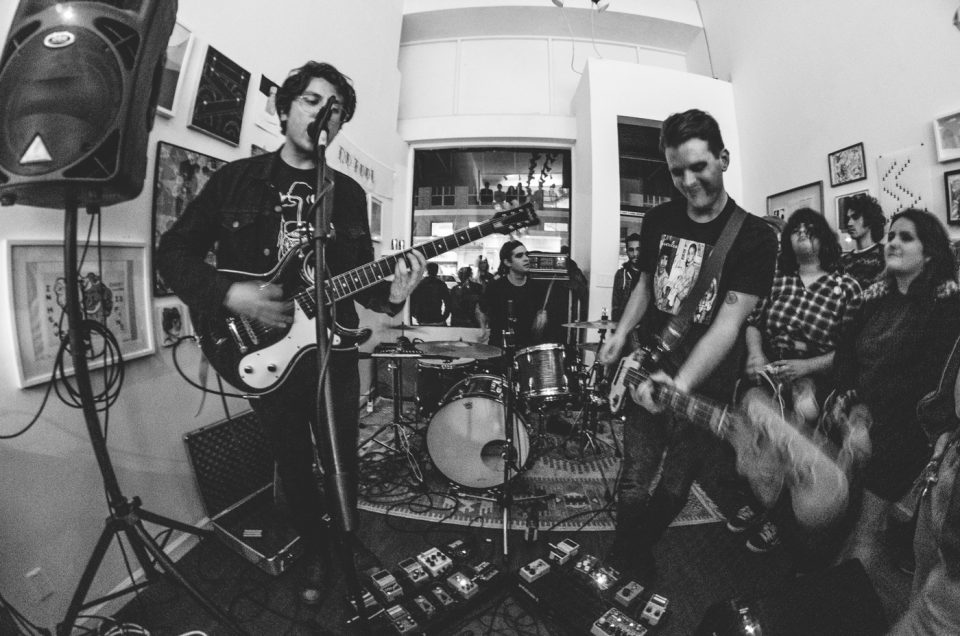 “I don’t know what it is, but I feel like it’s hilariously accurate somehow,” said Miller.

There is a nice mixture of Gang of Four, Wire and Siouxsie and the Banshees intertwined with their own personal style. Every song is like a self-reflective journal entry executed in a post-punk format.

Their last album, Funny Papers, is lyrically emotional but instrumentally contained and calculated. The song “Street Drugs and Cartoons” makes you feel like you are surfing one of those lines that show the road to success; it’s not a straight one, but an erratic one that goes up and down and sometimes backwards. The song is crazy and spontaneous, and escalates until it gets exhausted with itself, literally fizzling out at the end.

The other tracks, like “Protection Spells” and “Sleeping in Shifts,” are songs full of subtle self-reflection carried by Sonic Youth-meets-Siouxsie and the Banshees type instrumentation. Miller’s vocals are sharp, and execute a uniquely calm and even delivery, even through sadness and chaos.

A personal favorite was one of Mall Walk’s first songs/music video, “Pales in Comparison.” The oldie-but super-goodie is a song that is obtusely obscure and open for interpretation, but I’m pretty sure it’s about love and death. It is twistedly romantic and sad with Miller beautifully singing “Everything pales in comparison/To the one I love/In heaven above.” The music video features Oakland great, Gay Henry, as the apple of the camera’s eye where he mouths the lyrics in front of the backdrop of a sky that is dusty with the setting sun.

Recently, the band kicked off a quick tour in which they will shoot up to Seattle and back with a few stops along the way. After they play their Davis show, however, they plan on taking a break from touring to work on new stuff.

“We have played the same songs a million times now, and I think we are all ready to work on some new stuff. I just want to sit down and write,” said Miller.

All of the members of Mall Walk have been independently touring in different places throughout the world with other bands, and they are now prepared to settle at the Oakland home base for a while and maybe work on producing a new album soon.

“We love playing in Davis and with that community. Every show has always been so cool, and we’ve been super active there in the past few years because of our label, Mt.St.Mtn which is based out of Sac,” Miller said. “Community comes from arts and music. It is so important to nurture that necessity.”

Catch the very amazing Mall Walk on Sunday, June 18, with 39 other talented bands that same weekend, helping keep art alive for kids in the Davis Community. The Davis Music Festival will take place at venues all around the city from June 16–18, 2017. For more info and to purchase tickets, go to Davismusicfest.com. If you’re looking for more ways to contribute to Davis School Arts Foundation, go to Davisschoolartsfoundation.org. Give Mall Walk’s album Funny Papers a listen via the Bandcamp player embedded below.