“The Songstress” is ready to seduce Sacramento

Photo by Glynis S. A. Carpenter

It’s not uncommon to pigeonhole ourselves into music genres, to skip a song or station because it doesn’t fit that perfectly curated Spotify playlist or it doesn’t sound familiar. However, some artists who often deserve a second listen transcend genres—their music becomes a mission and not just components of rhythm and beats, instruments and lyrics.

Singer/songwriter Marsha Ambrosius sees her work this way. She may not be on the local radio station loop, or popular with the young teens who now inflate musician stardom by buying perfume bottles and arena tickets, but she has a strong fan base that spans more than a decade.

In 2000, she topped charts and broke stereotypes, hailing from England as part of the female duo Floetry with Natalie Stewart. Even then, her lyrics did not shy away from sensuality and straight talk. After the duo split in 2005, several artists noticed Ambrosius’ songwriting skills.

She quickly built a name for herself as a songwriter and producer, penning “Butterflies” for Michael Jackson and hits for artists such as Alicia Keys, Justin Timberlake, Jamie Foxx and Nas, and received the BMI Songwriter of the Year Award.

The song “Far Away” from her debut solo album, Late Nights and Early Mornings, which got her a Grammy nomination and a 2011 Record of the Year Soul Train Award, addresses suicide, drugs, bullying and being gay and black.

“This is my free therapy—let this be the escape,” Ambrosius says on an afternoon before a Minneapolis show. “Sing songs with your emotions. Don’t be afraid to run away.”

By ear, one of her songs might be beautifully dramatic and heartbreakingly convincing. Paired with its video, the song takes on another heavy layer of meaning and purpose.

For example, one of her new singles, “Without You”—a duet with R&B star Ne-Yo—epitomizes a painful breakup. Ambrosius’ mournful, deep pitch followed by clear, high cries attests to it. But, watch the video with images of a young girl and what imagination leads to be an abusive father, and the wrenched gut from the powerful song twists even more.

When writing “Without You,” Ambrosius says the lyrics came as just another moment in time.

“I have a platform to speak on issues and topics that people would run away from,” the 36-year-old says. “Through social media I am able to connect directly with my fans and they find solace in talking about these things. I’m just glad I’m one of those who can help.”

Ambrosius lives on her social media pages like she’s working a desk job, even though she is always touring. She is signed on constantly, responding to tweets and reposting, sending fans and friends emoti-hearts, and in the process collecting more fans.

“We get to have open dialogue, whether we’re talking about Scandal on Thursdays or Walking Dead on Mondays,” she says. “That velvet rope, social media kind of removes that.”

Growing up in Liverpool, England, Ambrosius didn’t have social media to find and connect to music, but she lived in an area swarming with musicians—famous and even infamous.

“We had a very blessed opportunity to appreciate music. I know we of course had The Beatles, but we also listened to everything from Earth, Wind and Fire, to Queen…Gilberto Gil, anything that was great, and I knew of it all because my parents were avid vinyl collectors so I got to play pretend DJ,” she says.

Ambrosius’ upcoming album, Friends and Lovers, is about the vulnerable barrier between the two titles. Ambrosius calls the album an autobiography of her past relationships.

“Friends and Lovers is to be listened to responsibly,” she has said. The difference between her first album and the new one, she adds, is only the amount of time that has elapsed.

“I’ve had more experience in life since Late Nights and Early Mornings, so this is the sequel of what already was,” she says. “I had already wanted an album that was completely cohesive from beginning to end, but sometimes you can only make a song 3 minutes and 50 seconds and there is so much more to say. Like, what happened with that relationship?”

Early reviews of recently released singles praise Ambrosius’ range, compare her to Alicia Keys and Prince, and suggest the singer will reach a higher level publicly than ever before.

Ambrosius doesn’t have a release date for the album, because her plan had been to present it as a live album.

“This belongs to the people,” she says. “When you see it live then you experience the type of person I am and the voice I am for the people.”

The live experience, she adds, will also reflect her songwriting.

Ambrosius will play Harlow’s April 25, 2014 and believes an album will be released once her tour ends in Las Vegas May 10. She often brings in guest appearances and local talent to her shows, and noted she is researching Sacramento-area music to see who will open for her show. Doors open at 9; tickets start at $40. UPDATE: This show is currently SOLD OUT! Check out Facebook.com/submergemag for ticket giveaway! 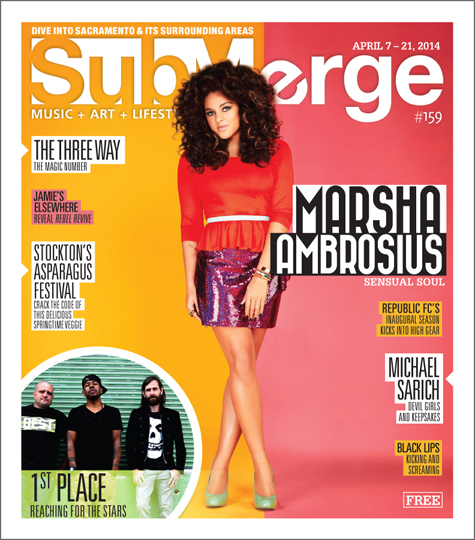