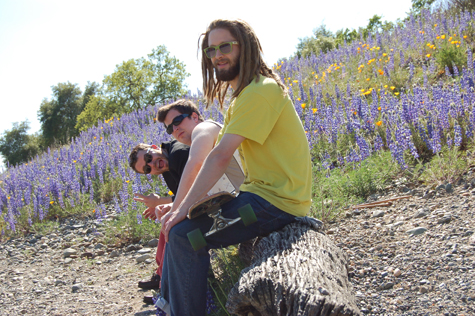 Before you start to complain about the scorching 100-degree Sacramento weather, try and remember that there is no place like home. Even though Californians start to sweat at 9:30 a.m., our vast variety of culture, music and art make the heat bearable. After living on the East Coast for nearly five years Andrew Conn, bass and synthesizer player from band Massive Delicious, missed his home in the Golden State. When Conn decided to move back he asked his band mates, vocalist and guitarist Dylan Crawford and drummer Josh Rosato, the ultimate question, East Coast or West Coast?

“I was always telling those guys I am moving back to California with or without you, East Coast is too cold. I always knew I was coming back to California and I was basically like, ‘You know it’s a better scene out there so if you guys want to come with…come with,’” said Conn over the phone.

Shortly after his band mates decided to follow him to Sacramento, and they are now making a name for themselves as Massive Delicious. Only after living in Sacramento for nearly a year they feel welcome and see more support for their music in this town then they had ever experienced on the East Coast.

“East Coast was very like every band for themselves, there’s much more of a musical community out here,” said Rosato.

Massive Delicious is a fast-moving band that is quickly picking up momentum in the Sacramento music community. During the past few months they have received positive feedback from fans and other local bands.

For the rest of the summer season they have shows lined up for almost every week all over California–in Santa Cruz, San Francisco, Pismo Beach and a CD release show at Harlow’s in late July. The trio is also boarding their live show on a train (the Sacramento Beer Train) with local band ZuhG and beer from Sudwerk Brewery on July 21, 2012.

Their quick popularity comes as no surprise because their style of music contains a catchy blend of reggae, jazz and funk. Massive Delicious adds new spice to make jazz and funk contemporary but still manages to keep a traditional feel to their soulful music. While listening to one song you might get a chill jazz vibe or a “funky psychedelic jam session” in another.

“We definitely go toward more of a reggae side of things. The jazz and funk are dispersed in-between it,” explained Conn.

All three members have been working toward their latest self-titled album, that will give you smooth jams to dance to during those warm summer days by the American River. The album is complete with seven songs that make up 45 minutes that will help you unwind at the end of the day. Massive Delicious has been working on this album for almost a year and a half and some tracks were even created two years ago. “This album has been a long time coming,” Rosato explained.

Each song sounds like a continuous smooth jam session. While listening to Massive Delicious’ music you can’t help but feel relaxed and content.

“We just want to get our positive energy working so that the crowd can be positive about it and get moving because if people aren’t moving, then we aren’t really doing our jobs,” explained Conn. “We want the little kids and the grandmas dancing.”

“What we are trying to do is go for a universal music.

When anybody hears it they are going to be like, ‘Wow that is good music. It may not be my thing but I appreciate it,’” added Rosato.

And before playing their good music there’s only one thing a drummer needs to get ready for a high-energy show.

“Cheeseburgers for Josh,” said Conn with a laugh.

“Maybe if a cheeseburger is available, if not I’ll have a few beers and then I’m chilling,” joked Rosato. “We’ve done so many shows at this point. Andrew and I both did 200 shows in the bands that we were in before. It’s just like another thing. We go out there and do it.”

Just after playing a first few shows in their new home of Sacramento, they all knew that they had moved to the right place. From making women in the front row at Harlow’s dance to their jams to making the crowd move at the Reggae in the Hills Festival in early June, they have become a part of the unique musical community in the area. They found it surprising that being an unknown reggae band people were still dancing and grooving to their jams.

“It’s really refreshing after being back East for a couple of years, where the scene seems to be oversaturated. There’s not much love going around to local bands like out here,” said Conn. “There’s a lot of love going around [here] so we really appreciate that.”

Even though their musical scene had changed for the better, the East Coast has served them well in the past. Conn, Rosato and Crawford have a strong musical background and education. Crawford studied music for four years at the University of Idaho, Josh has a degree in classical percussion, and Andrew has a degree in contemporary writing and production for music. The trio officially became good friends while studying at the Berklee College of Music in Boston. Massive Delicious uses their education, musical influences and previous band experience to create a sound that is truly unique and fun.

“One thing going into the band, I really [didn’t] want to sound like some other band. I wanted to come out here and retain my own sound,” Conn said. “I think all of us do a good job of that, not trying to sound like anybody else.

Through their own sound Massive Delicious wants to spread positive energy, to the West and East coasts. “When it comes down to it we love what we do,” said Conn. “I think we’re really just trying to spread good vibes and have a good time.”

Massive Delicious will play their CD release show at Harlow’s on July 26, 2012. Also playing will be local jam-rock powerhouse ZuhG, Awkward Lemon and Adrian Bellue. To purchase tickets, go to http://harlows.com/. Get there early because the first 100 people will get a free copy of the CD.