MC Rut Gives Sacramento Something to Scream About 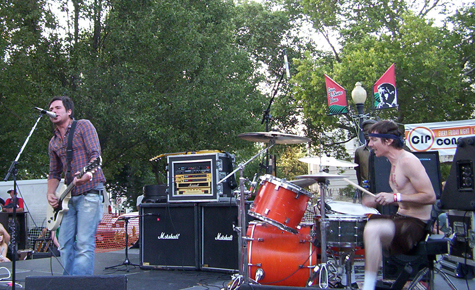 Crank up the volume and feast your ears on a musical smorgasbord that definitely requires a full concert hall. The native Sacramento band MC Rut combines the talents of singer and guitarist Zack Lopez with drummer and backup vocalist Sean Stockham. Lopez’s angsty lyrics explode on a canvas of poignant guitar riffs, for a full sound that is raw and edgy. MC Rut doesn’t tiptoe into their songs—they give it all they’ve got, musically and lyrically.

Who would have known a two-man band could rock this hard? This dynamic duo has been playing together since they were only 12 or 13, too young to even understand that music could be a business. “It was great,” says Stockham. “You played music because it was fun. Some kids were skateboarding. We were playing music.”

In 2000, when they were still in their teens, the guys were involved with a band called Leisure, which was appropriately named considering that neither Lopez or Stockham identifies very strongly with the band. “It was just an outlet to play shows with and be part of the scene,” Lopez remembers. It also allowed them that first taste of life as musicians. Living in Los Angeles and having a record deal straight out of high school. Lopez recalls, “We felt like we beat the system or something—but we definitely didn’t.” When the band dissolved in ’03 and it was time to join the real world once more, it was a disheartening experience. “It all fell apart and it forced us to join the club, so to speak, of what everyone else was doing,” Stockham says. “We came back tails between the legs and everything.”

In a sense, forming MC Rut was an organic decision to go back to their roots, to what music started out as for them. “That’s what we knew music as,” Lopez explains. Stockham adds, “We got sidetracked for seven or eight years. That’s what we consider that period of time in between the beginning and now.”

The pair played as an official band for the first time at the Capitol Garage in December ’06, and have made quite a stir since their debut. So far, they’ve released two EPs, which they simply refer to as “The Blue One” and “The Red One.” “These are our mix tapes,” Zack laughs. Although their second EP was just released in May, it was met with applause and a cry for an encore throughout Sacramento and beyond. The song “Busy Bein’ Born” is a hit in the UK, and the guys feel that it’s a much better representation of their style and musical capabilities than “New Low,” the catchy and more straightforward US single. Lopez explains, “We’re a lot heavier and a lot rawer and a lot more aggressive. [New Low] just kind of came out the way it did, but “Busy Bein’ Born” encompasses everything we do—it’s heavy, it’s soft, it’s melodic, it’s got lyrics, it’s got melody.”

Yep, it’s got melody, but don’t think that MC Rut is just screaming for no reason. Woven in with the powerful vocals and bad ass guitar riffs is a very honest fear of the ordinary, of struggling to make it in a life you don’t even want—as the name Middle Class Rut implies. “We’re goal oriented people, and the thing about the 9-to-5 American dream middle class is there’s really no goal—there’s just an end,” Stockham says.

They’re riding the coattails of fame now, but understand the fickle nature of the industry and that a 9-to-5 job could be just around the corner—although they continue to evade that world like the plague.

Amazingly, the fame doesn’t seem to have gone to their heads. But, they do admit that it’s a much more friendly world when you get to be the headliner rather than the opening act. Stockham recalls playing at the Boardwalk multiple times as an opening band, and generally being treated pretty badly. “Now when we roll in there and throw a show and it’s our show, we’re kings for a night,” he says proudly. With the reception they’ve been getting recently, it looks like they’ll get to be kings for more than just a night.

When it comes down to it, though, MC Rut is just two guys doing what they love. Public attention comes secondary to the music. “It just so happens that people are starting to listen in and recognize what we’ve been doing,” Stockham says.

Submerge catches up with MC Rut in the interim before they hop a plane to London—an interview that appropriately takes place at the Streets of London bar.

Can you tell me a little about the projects you’re working on now—the new album and the upcoming tour?
Sean Stockham: We’re always playing and writing music whether it’s an album we’re writing for or not. We do what we do. We get together five or more days a week and play music for as many hours as we can. Right now we’re getting ready to go to London in November. Obviously we’re really excited about that

Have you guys ever been to London before?
SS: This is the first time. It’s definitely something we’ve dreamt about doing since we started playing music. At some point we had stopped dreaming about it, and it didn’t even seem realistic.
Zack Lopez: Now it’s reality.

When do you think the new album will be realized?
ZL: We don’t even know really what the new album is. We’ve never written a song for a specific project.
SS: Out of what we have now we could probably put together maybe four to seven projects.

Why did you make the decision to release EPs instead of a full album?
ZL: They are full albums essentially. We’re just scared of the word “album.” Once you commit to saying “album,” that’s your first album.
SS: It’s just like not committing to marriage”¦ There’s something very scary about marriage and there’s something very scary about a full-length record.

So people have described your lyrics as being kind of aggressive. Did you write these songs during a dark period, or are your lyrics pretty consistent?
ZL: It wasn’t a dark period; it was just a normal life period. You don’t necessarily have to be depressed, you know? Most people aren’t happy with their lives as it is and I think that’s a big part of this band.

Your songs express a general dissatisfaction about middle class life. Would you say you have a fear of the 9-to-5 lifestyle?
SS: It’s different than like the fear of death, because none of us have actually experienced death”¦ The 9-to-5 thing is something that’s always right there.
ZL: I feel like some people are down with what they do and that’s great. It’s all about being happy with where you’re at. When you come to the point where you’re struggling to be somewhere that you don’t even want to be in the first place, that’s when you’re bummed.

Do you think that’s an artist thing?
SS: I don’t want to say that. You can say that, but yeah, that’s probably exactly what it is.
ZL: We expect a lot from ourselves. And if we don’t get it, then we’re miserable, and we keep chasing it till we get it.

You guys have high expectations, then?
ZL: From the first time we played music, we expected everything”¦ But at least we’re on the road to hopefully getting there. We’d rather be trying to get somewhere than never try and never be anywhere.

How do you think living in Sacramento affected your lyrics, or did it?
ZL: It definitely didn’t. It was more living in L.A., living on a failed dream that affected our lyrics.

In one of your songs, the song “I Don’t Really Know,” you write, “We’re never going anywhere, just circling around.” Do you still feel that way at times even today, even though it seems like your band is really taking off now?
SS: I think everyone feels like that, generally stated. For us in the band, its such an exciting time right now it would be really hard to not feel like shit was improving at least.
ZL: You’ve got to understand, five minutes of your life where you could feel so strongly about something you could write 10 songs, and you have to express what you felt at that point. It doesn’t necessarily express how you feel all the time”¦it represents who you are at that point. And we’re really good at writing songs about moments.

So if you wrote a song about right now would it have a more positive spin on it?
ZL: It would sound like 311. And we’d be bummed on it.

How has your music evolved between the last songs you released and the new songs you’re working on now?
ZL: The vibe is the same, but we feel like we’re better songwriters. If we don’t consistently keep writing better songs, we feel like we’re not doing our job. Every time we’re writing something, the only reason we ever move on something is because it’s better than what we’ve already done. If its not, it gets left behind, and that’s where it deserves to be.
SS: At the same time, if what we’re doing now doesn’t at least have something in common with what we’ve done before, then it’s not even us. 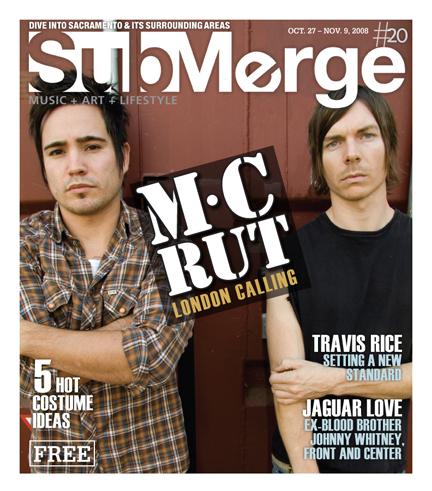