Heart Beat Like a Hammer: Mick Fleetwood on Playing the Blues and Being a Gigster 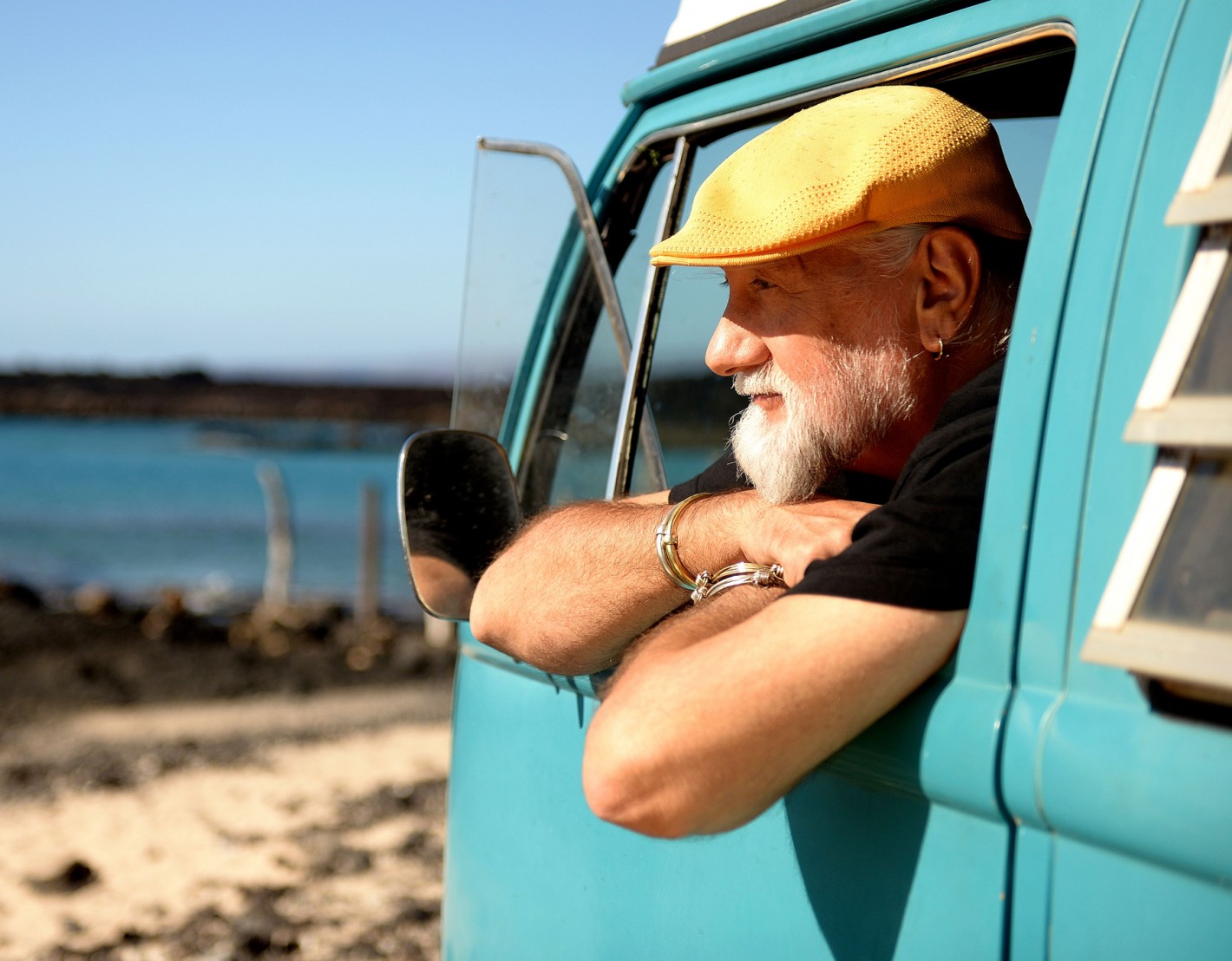 The story of Fleetwood Mac is really the story of two very different types of bands. Or, it could be the story of three types of bands if you count the fake Fleetwood Mac that toured in 1974. This fact goes beyond mere personnel. The original Fleetwood Mac was led by the versatile but ultimately doomed blues guitar wizard Peter Green, who broke away from John Mayall & the Bluesbreakers in 1967 and brought both Mick Fleetwood and bassist John McVie with him. This original incarnation of Fleetwood Mac was moored by the band’s affinity for Chicago blues brought into woozy realms with three great records at the end of the ‘60s. Following the onset of Green’s schizophrenia, Fleetwood Mac began a series of stylistic transitions and lineup changes—including the addition of McVie’s wife Christine and a folksy duo named Buckingham Nicks—which led in turn to the slings and arrows of massive success as typified by Herculean narcotics consumption, the harrowing multiverses of in-band love affairs and, oh my, so much more.

Few bands have had the sordid details of their private affairs so wistfully bandied so publicly as has Fleetwood Mac, and if you’re not privy to that great big pink elephant in whatever room the band happens to be in, you can talk to the whole entire internet about it.

Of course, in the process, Fleetwood Mac became one of the most iconic, successful rock bands of all time, yielding massive worldwide megahits and a bona fide breakout star in vocalist Stevie Nicks.

The face of the band, however, has always been their lanky, outspoken, wild-eyed god of a drummer, Mick Fleetwood. About 12 years ago, Fleetwood joined forces with guitarist Rick Vito, who’d replaced Lindsey Buckingham as the primary guitarist for Fleetwood Mac in the late ‘80s while Buckingham took a hiatus from the band. Vito’s versatility and love of blues endeared the two to forge a tangential project while Fleetwood Mac sorted out their impending reunion. What emerged was the Mick Fleetwood Blues Band, bringing Fleetwood back to the doorstep to his past.

The pendulum may swing wide for the unwise, but in Fleetwood’s case, the Blues Band is a chance to keep balance in what has been a long, fruitful, oftentimes wild career. Despite what it must be like to have so much of your public perception based upon one (eh, maybe two or three) decade(s) of extreme excess, Fleetwood is, after all, an artist and a musician. As you’ll read in the following interview, he’s a pretty down-to-earth bloke to boot. The Mick Fleetwood Blues Band is a bit of an homage to the original Fleetwood Mac with Peter Green, which was heavily blues-oriented. In what ways since you’ve been doing this project has it been fulfilling for you as an artist and performer to come full circle?
This is like going back to my training ground. I’m a blues drummer. If there’s someone who said, “Well, what are you really good at?” I’d say banging out a few shuffles and playing rock ‘n’ roll. Then, of course, you get into all the stuff with Fleetwood Mac. But this is where I started, so it’s always a very comfortable place to be. It’s sentimentally attached; I’m proud of all the stuff that sometimes quietly gets forgotten about what the early band did. I have a great guitar player and a great little band. It all stems from having a musical liaise, a love of blues. We have fun with it, we don’t overthink it and we hope a few people turn up and enjoy it.

Right, and with the live album [Blue Again!] that came out about eight years ago, you do have original material there outside of the stuff you were covering of Peter Green’s songs. Were you trying to build a bridge between that nostalgic element of that original blues-oriented Fleetwood Mac to something more contemporary with the originals?
I don’t think we were trying to do anything. We know where we sit. Having said that, Rick Vito is a huge advocate of Peter Green’s work with early Fleetwood Mac, and in truth that was from whence he came as a young musician, loving blues and appreciating Peter’s playing. It was the reason I asked him to join Fleetwood Mac when Lindsey took a hiatus for many years. That album you’re talking about, Rick has fun doing some of his own stuff and we work out what feels good. Or it might be an old Jimmy Reed song or whatever. We create that around a core of focused Fleetwood Mac material that people never hear anymore. Our prime thing is that people are going to have a good time and we’re not gonna start shoving stuff down their throat that they aren’t going to enjoy. I’m sure at some point we’ll create another album and it’ll have a theme, but we won’t be unidentifiable. You’ll always know it’s us just listening to Rick’s guitar playing. He’s got a beautiful tone and is an incredible guitar player. That will happen probably down the line. We record every night on ProTools, and we may get a whole bunch of stuff off this tour and go hey, let’s put another live album out.

If you do put out another album, would it most likely be a live album rather than a studio album?
Not necessarily, it could be a combo. I’m just saying the truth is we’re not planning any of it. The truth is this band has always been about we’re not trying to make it. For me and Rick, this is focus, it’s not not taken seriously. We’re out there putting our nuts on the line because we love what we do. But it stops pretty much there. We’re a working band, much like hundreds of thousands of bands that quite frankly you never hear about. They play small theaters, have a small audience and they make a living. For me and Rick, we’ve been blessed with a journey that turned out differently, and I’m still very active in Fleetwood Mac. Rick has his own career playing blues festivals all over the world, and we convene and we do this from time to time. It’s what we love to do. We do have a little audience but you’re never quite sure if anyone’s going to show up. But that’s all part of the blessings of getting in. I don’t assume anything. If someone says “Hey, we need some help; we need to do some radio,” I don’t say, “I don’t give a shit.” I give a shit. I want people to be there and want my little band to have a good experience and get in there and get out and get into the bus and go onto the next gig.

Do you enjoy playing the more intimate venues? They’re not small, but perhaps smaller than you would pay in Fleetwood Mac …
Of course, we love it! This is like going home for me. The reason why at the beginning of a Rolling Stones tour, invariably, you go “shit, they just did five unannounced gigs at a place that fits 200 people in it.” They like it. We’re all gigsters, ya know? There’s a reason poor old Prince, who passed away … There’s a reason the guy was hugely successful. Guess what? He had an amazing reputation about doing impromptu, get-up-and-play [shows]. He’d play gigs in clubs after he’d done a show with 20,000 people almost every night. He fucking loved it. We’re players; we didn’t grow up on the internet. We’re people who were lucky to get a cheese sandwich and a pint of beer if you played for eight hours. We love doing it. We’re from a different world. I’m playing Telluride, and Joe Walsh is there with his band. I know Joe well enough to know that he doesn’t need to be doing it. They don’t need the fucking money. They love it. Bob Dylan, Neil Young, Elton John and a little of a smattering of someone like Paul McCartney—but certainly Elton John—those are the worst offenders; they never stop working! On tour, it never stops. Peter Gabriel you won’t see for like three or four years, and then he’ll go and do something. And you go “Well, why are they doing it?” Willie Nelson is 83 years old, he lives on Maui where I live. I know him; he’s an unbelievable talent and a great human being. Having said that, he’s a nut! He never stops working! He’s always on his bus. The answer to it is just going out and doing something where you don’t have to overthink, you don’t have to worry about whether 25 or 30 trucks are going to show up in the winter on time. It’s simple: Get there and play. And play well.

And I’d imagine that’s a liberating feeling for you having gone on so many huge tours over the years. Beyond this tour with the Blues Band, are you preparing to switch gears for a much larger tour with Fleetwood Mac?
Not for about a year and three months [from now]. A year and three months, believe me, means when we start winding up and organizing a Fleetwood Mac tour, in nine months we’ll be organizing a whole heap of shit. But we’ll be back at it seemingly in that timeframe. So that’s that. I live in Hawaii and I actually get to play with [the Blues Band] at my lovely restaurant in Lahaina. So I play a lot. This [tour] is a treat, and it’s good. It’s hard work—we’re doing like four or five shows a week. You have to stay fit and I’m young and at it out there. I’m fine, I’m healthy, God willing and all that stuff. But you have to monitor what’s going on, and you can’t party all night or you won’t be able to do it. You’d be a fucking wreck.

If there was any additional information you wanted people to know about the tour or other new things happening with you, you can say that now…
… Or hold your peace, right? No, always with us musicians, we’re pleasantly insecure. So as a musician, it’s always “is anyone gonna turn up?” and you’re quietly concerned about that wherever you are. So we’re hoping we have a good little turnout, and the main thing is that we’re there to work. We’re there to do what musicians do. We’re troubadours. These smaller type tours, they’re more personal. It’s a lot more connection. We hang out with the audience afterwards. It’s a very jazz-oriented speakeasy pub memory. I’ve been doing this since I was 15, 16 years old. You plug back into that element where you’re really in the trenches doing something where you’re paying homage in a weird way to how you started.

This is a lovely memory zone for me, musically. It’s always a great reminder to be in a way, not literally taken back, but transported a little bit, to go “this is why I did this shit, and I fucking loved it.” And I feel blessed to say I still love it, whether in a different format or a different level. It’s a really important place to be.