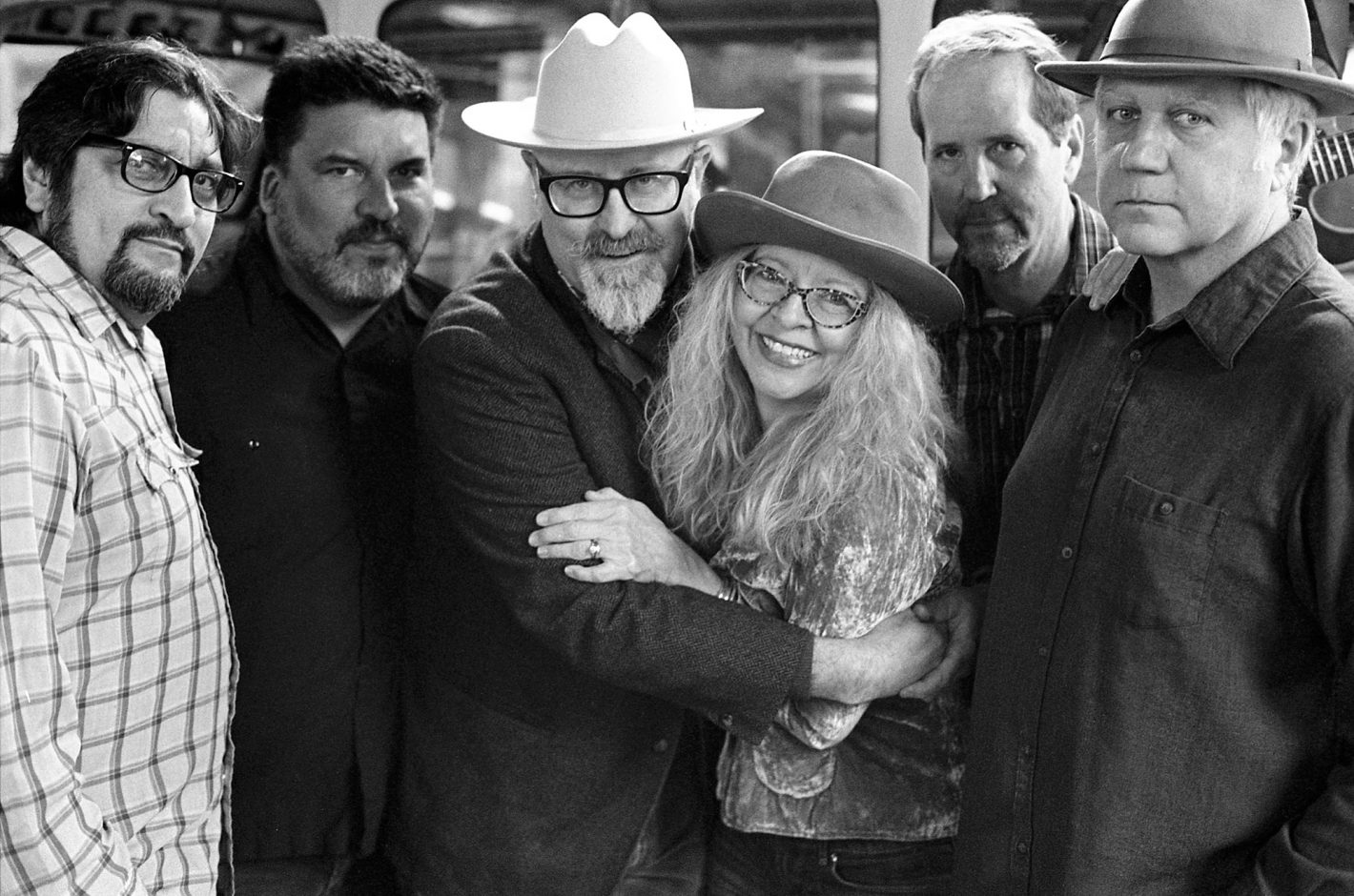 I’ve seen Mike Blanchard of the Californios referred to as a “renaissance man.” I don’t think it’s overstating it to say that he’s even more than that. Singer, songwriter, progenitor of Rust magazine and the owner of Barber Shop Automotive on 16th Street (you know that place with all of the cool Alfa Romeos out front?), Blanchard also finds time to curate art shows. Robert Heinlein famously said, “A human being should be able to change a diaper, plan an invasion, butcher a hog, conn a ship, design a building, write a sonnet, balance accounts, build a wall, set a bone, comfort the dying, take orders, give orders, cooperate, act alone, solve equations, analyze a new problem, pitch manure, program a computer, cook a tasty meal, fight efficiently, die gallantly. Specialization is for insects.” While I doubt Blanchard has ever planned an invasion, and wall-building is for Fox News villains, I bet Heinlein couldn’t hit a harmony or tune a carburetor like Blanchard can.

I met up with Blanchard and his wife Laurieanne, who form one-third of the sextet Mike Blanchard and the Californios. Tactful, charismatic and well-spoken, Laurieanne seems just as comfortable talking about Merle Haggard as she is singing harmony and waxing poetic about the pitfalls of longevity as a musician. I got a midday coffee with the Blanchards and caught up about their new album, Dark Secrets, which was released in July.

Let’s start at the beginning. Tell me a little bit about how you two met and how you started playing music.
Mike Blanchard: I used to be in a band called Tattooed Love Dogs. Laurieanne was a musician in town, and we met through playing music at different places. She ended up inviting my partner and I, Vince, to be on a project that she was doing and we got to know each other a little bit better. Eventually, the whole girlfriend schedule cleared up and we got together.
Laurieanne Blanchard: He had room on his docket and I bubbled to the top of his list, evidently. Now he has no room on his docket. I locked him down.

How long ago was this?
LB: We just had our 25th anniversary about two weeks ago. We got kind of set up by a friend of ours who—and that’s a whole other story—is a club owner. He saw that we liked each other, but neither one of us was gonna make a move.
MB: He sort of forced the issue a little bit. But after we met, she moved away for a year to go play music in Nashville.
LB: I lived in Nashville for a year and a half, and I would come back and see my folks and see him.
MB: We were doing a record and I wrote a song for her to do a duet on. I talked her into coming back and then I talked her into staying. So that pretty much sums it up.

Let’s talk about Dark Secrets specifically. I’ve been listening to it—it’s great. It sounds really refined but also sort of spontaneous.
LB: That’s exactly what we were doing!
MB: We recorded it live in the same way they would do in the old days, in the ‘50s and ‘60s. We recorded into one big stereo condenser mic and played it live, that’s why it has that feeling. I don’t think we played any of the songs more than three times, including the main vocal—everything was live.

Wow. Yeah. It shows, it’s funny what happens when you have people who are comfortable being spontaneous.
LB: We did the entire album in three sessions!

How much recording time did that work out to be?
MB: It was about 30 hours’ worth.
LB: The first day we went to go into the studio was the day of the Paradise fires. I don’t know if you remember that day, but people were walking around with face masks on and it was horrible. And so here we are, we’ve been waiting to get in the studio and to get everybody to be in one place at one time. We were like, “Do we cancel?” because the air was so bad. We just went for it, but it was on our minds. Our drummer’s parents lost their house. My cousin lost his house, our son’s best friend’s parents lost their house. So all that was on our mind while we were in the studio.

Do you think that the spontaneous nature of the record let some of that feeling seep in?
LB: I played it for a friend of mine, and she said she could tell something was going on. We recorded my song “Ode to Billy Joe” right after my dad died. There’s this line that says, “Papa caught a virus and he died last spring.” I had such a hard time getting through that. Things that were happening in our lives, especially since everything was recorded live, it definitely bleeds through.

It’s heavy. I was familiar with Gringo, which puts forth a way different mood.
LB: Yeah, it’s a lighter album.

So what was the change that happened along the journey from Gringo to Dark Secrets?
LB: A couple of things I can think of. One, we had been playing with a couple of musicians who had a strong effect tonally. One of them was Steven Schultz, an incredible accordion player. We tended to write songs around that instrument and would dig into stuff that we wouldn’t normally. Vinnie Montoya began playing rhythm, but he’s also an incredible vocalist.
MB: We met Roger Kunkel through the Whole Earth Festival and he played with us. It worked out really well.

So tell me what’s next for you guys?
MB: We’re just finishing a record that we did with just Laurieanne. It’s basically the same band, but she’s out in front singing the songs.

What’s that band called?
LB: Laurieanne Blanchard and the Californios. It’s all the same people, but it’s a lot more ‘20s, ‘30s jazz sounds with a little blues thrown in. It’s really an homage to my mom; she wants me to do a record of music that she grew up listening to, so I tried to pick songs that were from decades from her life. She’s getting producer credit at 96 years old!

When does that come out?
LB: As soon as we can get it done.
MB: It’s really close. It’s all recorded and
we’re mixing.

Tell me about the other people in the band.
MB: The thing is, we were really lucky in that the guys that play in the band are just super, pro, fantastic guys. The guy that’s been in the band the longest at the moment is Eric Crownover. Amazing, amazing drummer.
LB: He’s a spot-on drummer.
MB: He’s just absolutely incredible. Rob Meyer, the bass player, and we’ve known him for 20, 30 years. He’s played in bands that we played with and that Laurieanne played with. He’s a really good bass player and a good person who has good ideas about music and arrangement and those types of things.
LB: Well, with Eric, because obviously they’re the rhythm section and they bounce back and forth with each other on ideas about arrangements. And Eric also works really well with me, Mike and Vinny on vocals, he’s got a degree in music so we really lean on him.
MB: The other one is Vincent Montoya, who’s my partner. We’ve been playing music for 30 some odd years. We were in the Tattooed Love Dogs together, and he’s my best friend.

What does he play?
MB: He plays the guitar, sings and writes songs.
LB: He wrote the song “99” on the new record.
MB: Then last but not least is Roger Kunkel, who’s the lead guitar player and he’s just an amazing player. He played in Thin White Rope and just a ton of bands out of Davis. I mean, he’s just a really great guy and has really great stories.
LB: I just found out that after playing together for four years, his rock band, when he was in Thin White Rope, was the very first western rock band to go into Russia!
MB: Eric’s been in the band longer than anybody else—about 10 years, and then after that we brought in Rob, and then we brought in Vince and Roger came in about the same time. It’s like a family and it’s been something that’s really a saving grace. Getting through some of the last three years for various people in the band had been really hard and I would say this group of people are uniquely ideal at helping each other through those times. We have very similar musical references. My thing’s always been playing Americana before it was Americana.

What do you mean before it was Americana?
MB: When we did the Tattooed Love Dogs, we were a twang rock band and no one knew Americana as a sub-genre. So we’d go to a lot of major labels and meet with these guys and they’d be like, “What are you guys, a country band or a rock band? You’re going to have to pick one or the other.” And then all of a sudden Wilco and all of these bands hit and they were like, “Oh, hey, look at this new thing.” It’s like, fuck you guys—we’ve been doing this for 10 years. We have a lot of good friends in Nashville. We love going back to Nashville, playing music and hanging out, and they’re proud about being from Tennessee. Our friends from Austin are super proud about being from Texas. We’re from California and we’re just as proud of being from California with just as rich a musical tradition—that’s where we’re coming from, we’re not all archeological about playing country music from the ‘40s or whatever. That’s not our thing.

Mike Blanchard and the Californios new album Dark Secrets is out now. You’ll have a couple of chances to check them out live as well: On Saturday, Sept. 28, 2019, the band will play Two Rivers Cider Co. (4311 Attawa Ave., Suite 103, Sacramento). This all-ages show has a $5 cover and will get underway at 6:30 p.m. The following week, Mike Blanchard and the Californios will hit Berryessa Brewing Co. (27260 Highway 128, Winters) for another family-friendly show on Saturday, Oct. 5 at 3 p.m. For more info, check out Mikeblanchardandthecalifornios.com.