Mike Watt in the Middle 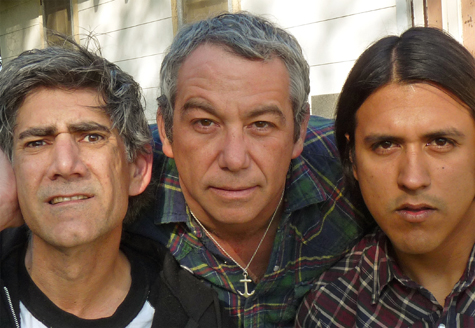 It’s possible to age gracefully, even if you’re a punk rocker. It may not be the norm, but Mike Watt stands proof that punk isn’t exclusively a young man’s game. Seemingly ageless, Watt continues to make vital contributions to the punk rock lexicon.

Perhaps his indelible character has played some part in his longevity. Much like the Internet, Watt has his own language. You won’t hear a lot of LOLs and OMGs or things of that nature, but he’ll call his albums “operas” or his desire to “keep the peace” at his live shows (he seems to perform perpetually). It’s best not to fumble over semantics, just do your best to keep up.

“You said you had questions?” he asked five minutes into our interview. “Because I don’t want to bum rush you.”

It was kind of late for that, but that’s not necessarily a bad thing. It’s an honor to hitch a ride with Watt. At 53 years old, he seems to have the energy and creative prowess of a man half his age. He made a name for himself as bassist for esteemed art-punk bands Minutemen and fIREHOSE, but Watt has shown a tireless work ethic over the course of his storied career that has translated into numerous projects such as Dos (with fellow bassist and Black Flag alum Kira Roessler), a handful of solo releases and tenure with the reunited Stooges. And there’s a whole lot more to come, which is why he recently started his own label, Clenchedwrench Records.

“My next album is going to be about work,” Watt said of the album he’s planning to write next, a fitting topic that he would seem to know a lot about. “It’s going to be with the Secondmen [Pete Mazich on organ and Jerry Trebotic on drums]. It’s going to be called Pick It Up and Put It Over There. It’s the band I used for the second opera, but it’s not going to be an opera. It’s going to be a concept album. It’s going to be a collection of songs dealing with work, but I have many things I’ve recorded in the pipeline.” Watt says there are about nine or 10 projects currently in that “pipeline,” including the fourth Dos album, which he says will be released in May.

Currently, Watt is on tour (his 65th tour by his count) with his band The Missingmen (Tom Watson on guitar and Raul Morales on drums). He’s on the road in support of his latest release, Hyphenated-man, a solo album and first for Clenchedwrench. Watt calls the album “one song in 30 parts.” It’s his first solo release in seven years and draws from a variety of influences including middle age; Minutemen guitarist/vocalist D. Boon, who died in a van accident in 1985; and the paintings of Hieronymus Bosch–specifically the triptych, The Garden of Earthly Delights, where Watt found the characters for which he named each part of the “one song.” Though Watt normally writes his songs on bass, Hyphenated-man was written on Boon’s own Fender Telecaster guitar.

“I was afraid to talk about certain things,” Watt said. “I thought it would give me courage.”

Though it looks to his past, Hyphenated-man captures Watt in the very moment of his life when he wrote it. We spoke with Watt about his latest creation as he was driving from Pittsburgh, Penn., to Cleveland, Ohio. (“I have one of those Bluetooth fucking things in my head,” he assured us.)

It should be noted that our interview with Watt was scheduled for a Sunday at 3 p.m. After an hour of sitting by the phone, there was no call. He called Monday around noon, entirely unannounced.

Hold on, I have to get set up. I wasn’t expecting your call…
You’re giggling!

How was Pittsburgh last night?
It was a sold-out show, and everyone was very respectful. You could hear a pin drop. One man was very impressed that Tom was working a Fender and not a Gibson. I shit thee not!

Do you get a lot of crowds like that?
No. Usually they want to hear songs from the first opera–they want me to be a jukebox. They’re commenting on my unmanliness.

So you prefer it if…
No. No. There are enough cops in people’s lives. I’m not going to be a policeman. We just deliver the peace and whatever is, is. I did ask the soundman to take the guitar out of the monitor, because he was fucking killing me. And that really bothered me, because I want to keep the peace whole, you know what I mean? I don’t want to break it up. I don’t want to break the spell. 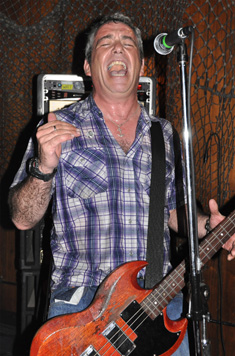 You’ve been on the road for over a month already…
Last night was the 33rd gig in a row.

How do you keep up that kind of pace?
James, I try to keep it in perspective. I think working in a salt mine and having five starving kids is a lot tougher. I look at the “O” word, opportunity, not the “B” word, burden. I got into music to be with my friends. Everything’s hard, like you’ve got to eat chow, and then shit it. Sometimes you can get too much in a reductionist mode. I mean, God damn. I can get too cynical, like how I almost ended the piece. I was going to end it with “Man-shitting-man,” but I said, no. That was too down. I have to acknowledge those things, because that’s part of the world, but I put a middle song at the end at the last minute.

I read that you decided to do that in a different article, that you wrote the songs in order, but…
Yeah, that’s right but I had to make a change. I normally don’t second-guess anything, but I did in that case.

I loved the last track, “Wheel-Bound Man,” was it difficult to pick that one to stick at the end since the songs seem to have a specific order?
No, it was in the middle. This was different than the other two operas that were beginning, middle and end; this one was all middle so it made sense to me.

As someone who’s always working on other projects and with other musicians, do you have a different approach to your solo career?
Hmm… As opposed to being a Minuteman? Well, with the Stooges, I take direction. With the Missingmen, I give direction. Now, I have other collaborations where I write all the songs on the bass, but I describe them as collaborations where it’s more them than me. The politics of bass is about you look good by making others look good. I like that.

A lot of your career you’ve written on the bass…
This opera was different. I wrote it on D. Boon’s Telecaster. That was a lot different for me. I like writing on bass guitar, because it leaves a lot of room for the guys I’m playing with.

Is that your comfort zone–being upfront but giving the guys you’re working with a lot of room to do their own thing?
That’s my tradition. That’s how D. Boon molded me. That’s how I learned how to play. He wanted political ideas in music. He thought it should be equal–the bass player shouldn’t be lower in the hierarchy, kind of like right field in little league, where you put your retarded friend. I put my drummer right up front. So Boon has had a big effect on how I see music, even though he’s been gone for 25 years.

You mention D. Boon as a big part in your career and this album. Why did you write these songs now, some 25 years after his death?
Oh no, no, no. I wanted to write about middle age. I’m 53 now, but I wrote these songs when I was 52. I wanted to write about being a 52-year-old punk rocker. I wanted to write about now using something from my past, but I didn’t want it to be some sentimental Happy Days bullshit, using ideas from the old days: a painter I liked as a boy, Mr. Bosch; even Dorothy from The Wizard of Oz. I was thinking of her. In the movie, she’s tripping on what men do to be men. I think that’s a big part of being middle aged, maybe. These are all devices to talk about me right now, different than the other two operas, which were beginning, middle and end. This is all middle.

How did the Bosch paintings play in?
I saw them at the Prada in Spain. But I was fascinated as a boy seeing them in the encyclopedia. My mother had the World Book thing. I was into dinosaurs and astronauts too. I think it was just fucking way out shit.

Was seeing his work in person what triggered you to write the songs?
I start with titles, because I need focus. Then I write the music, and then I write the spiel. I used his little creatures to get me focused so I could talk about things in my life. Some things are difficult for me to talk about literal, so I have to use analogy and metaphor. D. Boon said my words were too spacey.

You said that the album’s about being a 52-year-old punk rocker. Was that something you ever thought was possible when you started out?
No. I thought I’d be dead. I never thought about these times. It’s very strange. That’s why I wanted to write about it. It’s OK, though. My body’s lamer, but I have stories now. It’s an interesting place. I know we’re all taught to really dread this place, but it’s not that bad. It’s all a part of the journey.

You’re so busy with all your projects…
James, I don’t know how much time I have left.

Oh, I’m sorry. We can end the interview now if you have to…
No, I’m talking about my life. That’s why I’m so busy. That’s one thing about middle age. The glass is more half-empty than half-full. Does that make sense to you?

It does.
You feel your mortality. I never had children. The closest things I have to children are the albums.

Is that something you regret–not having children?
My father was a sailor, and I never saw him. My life is like a sailor’s, so I didn’t want to do that to a child–never be there.

Mike Watt and the Missingmen will play The Press Club in Sacramento on Thursday, May 12 as part of the Fourth Annual In the Flow Festival. Guaranteed to be a hoot!