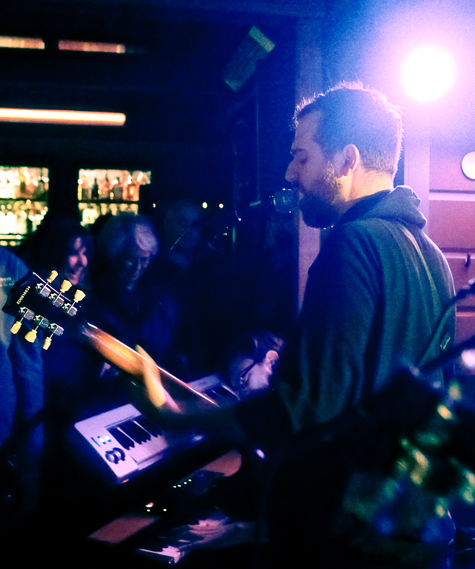 Being 5 feet tall can have its advantages. First off it’s easy to become a champion of hide and seek, no cabinet or closet is too small to curl up in. And the chances of running into a bookshelf or tree branch are at an all-time low, because it’s easy to walk right underneath them without noticing. But the worst time to be vertically challenged is trying to see at a concert, especially if the stage is the same level as the floor.

The stage at Sophia’s Thai Kitchen in Davis isn’t actually a stage at all; it consists of a small wooden porch where all of the band members are cooped up in the corner, which provides a low level of good viewing but a high level of intimacy. As my friend Lucy said, the band members have “no room to bust a move.” But the three bands that opened up the “2012 Music Season Premiere” for the tiny venue didn’t need space to show off new moves but showed off their musical talents instead.

The opening band (starting oddly on time for a rock show) was Chicago’s garage-pop trio, Unicycle Loves You, who were all about making a bold statement. The drummer of the group rocked out while wearing bright red shorts that seemed at least two sizes too small for him. But he might have been the only person who could pull off wearing short shorts during a chilly March night. Their live music could make anyone want to jump up and dance around in circles. Before playing their last song, the lead singer boldly said, “Davis is better than Los Angeles and San Francisco put together.”

During setup for the next band, 1, 2, 3, the crowd seemed to multiply in minutes, making everyone squeeze in a little tighter. The lead singer got ready for the show by wearing a straw hat with a loose rope chinstrap. He later admitted that it was bought in San Francisco because he “thought it was appropriate” for the night. Their two guitars, drums and bass brought a fun but peaceful vibe into the air that even made some viewers on the sidewalk start to dance. For the last song of their set the drummer decided to play standing up, which led to a long instrumental jam session between all four band members. Originally from Pittsburgh, Penn., the band made their trip to Davis seem unique and not just another stop on their tour.

Somehow by the time the headliners, Milagres, took the stage the number of people in front of me multiplied again, making it an even tighter squeeze and keeping the prime viewing spaces at a minimum. Although it was difficult to see any of the band members, the sounds could make any music lover nod their heads and tap their feet in appreciation to their songs. Hailing from Brooklyn, N.Y., Milagres’ melodic but powerful music shook the wood panels of the porch. Shows at Sophia’s Thai Kitchen are usually a mixture of people who are trying to drink while holding loud conversations and people who are really into the music. But while the headliners were playing, most people were tuned in to the music. Milagres’ set ended with an encore that was demanded by the audience, making it all of the possible songs they could play in one night.

Although the view of the band was minimal, watching the reaction from the audience was almost better. I caught a girl with her eyes closed swaying side to side, a guy fist pumping, people yelling song requests and lots of head nods. It didn’t matter if someone was sitting front row with a perfect view or in the back sitting on a bar stool, everyone could hear and feel the music that night.