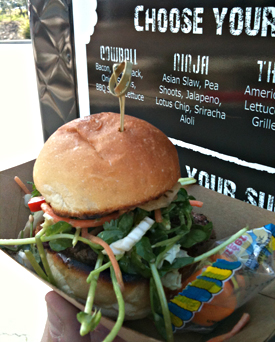 Would it be too pretentious if I quoted myself? Eh, fuck it. In a past “Refined Tastes” column, I pointed out that we write an awful lot about burgers. And, “It’s not that we favor burgers or establishments that serve them, it’s that Sacramento continues to turn out press-worthy product.” That continues to be true, and if we’re a burger town, then I am perfectly all right with that. In this issue’s column, we tracked down the Mini Burger Truck, Sacramento’s newest and exciting purveyors of patty. They do it from a truck and they do it well. Fasten your seat belts, this one’s on the go.

If you’re lucky, then the truck comes to you. But if you seek the truck, it’s best to “follow” its trail of tweets. Mini Burger Truck, whose handle on Twitter is plainly that (@MiniBurgerTruck), took the concept of live tweeting their varying locations that other food trucks and carts in cities like Los Angeles were having success with and has been attracting steady followers. Food cart success story Kogi, a Korean BBQ to-go business based out of Los Angeles, alerts Twitter followers to their scheduled locations. There are different carts that occupy different spaces and often the cart sells out. With Kogi’s over 82,000 Twitter followers, it’s no surprise. Mini Burger Truck, with a growing 800-plus followers, has already attracted a real-life following of state workers, UCD Med Center employees and downtown lunch-breakers, to name a few. It’s a no-brainer if you’re hungry; a gourmet burger truck with sweet potato tater tots and seasonal specials is a far cry from the standard roach coaches. So, why all the fuss about Twitter?

“We can’t stay in any one place for more than 30 minutes, and we can’t sell after dark,” says Mini Burger Truck owner and founder Davin Vculek.

This truck is constantly relocating throughout the day and doesn’t–let me rephrase that–can’t stay put for very long. The City of Sacramento has strict rules governing what the trucks and carts can and can’t do. Vculek says they “want to come downtown five days a week,” per people’s request, but parking is an issue, too. If it’s in your neck of the woods, then you’re golden. But for Twitter followers of the Mini Burger Truck, it’s about the hunt. 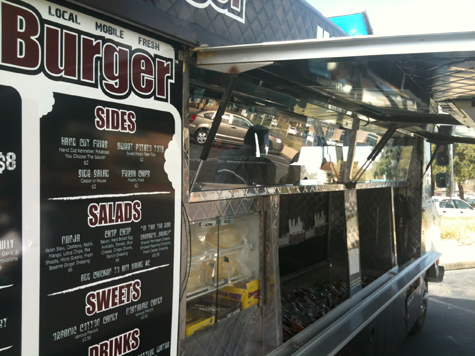 “I follow them on Twitter and try to stay in the loop with what’s going on with food,” said food truck enthusiast Naida Enriquez. “I’ve been trying to find a convenient time.”

I chatted with Enriquez, who was in front of me in line. There were a good eight people in front of her and another 10 waiting for their food. She kept checking her phone, anxiously watching her lunch break waste away in line.

“I don’t think I’ll have enough time,” she said with a filled-out order form and small yellow golf pencil in hand.

As someone who stays “in the loop” with what’s happening with food, she’s no stranger to food trucks. She filled a short stay in Austin, Texas, sampling the plethora of food trucks and carts that troll the city. She was excited to hear about the Mini Burger Truck in Sacramento. Those same trucks and carts who have found open arms and success in other cities are exactly what inspired Vculek to start the Mini Burger Truck. Originally from Redding, Calif., Vculek went to culinary school in Portland, Ore., before landing a job as a corporate chef for Food Network star Guy Fieri. The food truck was something that was always on his mind.

“I thought mini burgers would be an awesome concept for a food truck,” he tells Submerge. “They’re easy to eat on the go.”

Vculek says that business has been good so far and they are definitely meeting their projections, aside from the city’s obstacles.

“It’s sad that during a time when so many jobs are leaving California, the city is making it so difficult for us to work,” says Vculek.

Long waits for food to come up have caused some complaints among customers, an issue that eventually forced Enriquez to abandon her place in line to return to work.

“People have been complaining about the wait,” says Vculek. “We don’t use steam trays, which is what a lot of the other guys use, which is fine. It’s just not how we do things. We make everything fresh.”

“The Ninja” was calling my name long before I finally found the truck in the Kiwanis Family House parking lot that is adjacent to the UCD Med Center and the Employment Development Department. With a name like “The Ninja,” how could I resist? A black Angus beef patty sits underneath crisp and refreshing Asian slaw, pea shoots, jalapeÃ±o for a nice little kick (Ninja, get it?), lotus chip for crunch and is topped off with some Sriracha aioli ($3). You actually feel healthy eating these little assassins because of the lightness of the slaw. It was a perfect marriage of salad and beef and if the truck wasn’t shutting down shop, I would have gone back for another. Free-range chicken breast and South Dakota bison burgers are on the menu too, and customers can choose between a brioche or wheat bun. Grab some Kennebec potato fries ($2) or sweet potato tater tots ($2) and you’re golden.

Follow the Mini Burger Truck on Twitter to find out where it will be next. Trust me, it’s worth tracking down and certainly worth the wait. After all, haven’t we waited for a food truck in this city long enough?