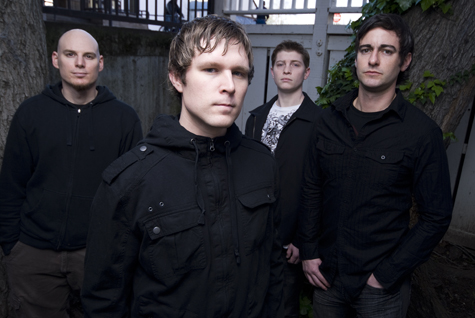 For local rock guitarist Josh Amolsch, April 13, 2011 is a very important date, one that’s long overdue. The band he founded way back in 2003, Misamore, will finally release their first official recording, a five-track EP titled Horizon, at Powerhouse Pub in Folsom. “This album has been a very long time coming,” Amolsch recently admitted to Submerge. “Every time we tried to put something out it always ended up going sideways due to one reason or another. So having this album finally come together is a huge achievement for this band.”

Misamore’s sound lies somewhere between that of Tool, Pantera, Mudvayne and Metallica. The EP’s opening track, “The Desert Shade,” boasts speedy guitar riffs and a huge range in singer Mace Corona’s vocal abilities, who can change from melodic hook to brutal scream in a heartbeat. “New Beginning,” the second track, has a much more radio-friendly vibe to it, but still showcases the band’s musicianship and knack for weaving in oddly timed rhythms seamlessly. “Dead” is a whole lot slower than the first two songs and acts as a great centerpiece for the EP. “Forebay” gets a little tripped out at times, sort of Mastodon-ish, and proves that Mike Dragony can slap the shit out of his bass with some impressive playing in the intro; and “Home” brings Horizon to a close, leaving you wanting more.

Submerge caught up with Amolsch recently to chat about the band’s tumultuous past, their new EP and the status of heavy music today.

Why did it take so long to get an official release together? There have been quite a few ups and downs for this project, right?
Well, we had never had a full band together long enough to put a legit album out. We are very meticulous with everything we do and didn’t want to put out something we weren’t proud of. With that, there have definitely been more downs than ups. Misamore first came together in February 2003 after my old band broke up. I, along with the drummer from that band, launched Misamore. The next four-and-a-half years saw many member changes, a move out to Texas and back and a brief period of time when I just flat gave up and started playing drums in a punk band.

How did the current lineup come about?
I have known Mike for years. I first met him back in 2000 when both of our bands played a show up in Chico at a house party. We met Mace through an ad on Craigslist in 2008 and although it took a year to finally hook up, it clicked right away. Mace met Ryan [Maples, drums] at our rehearsal spot back in December 2010 just walking in the front door. I’m told that Mace just had a weird feeling about this guy and turned around and asked him if he played drums. We had fired our old drummer about three months prior to starting the record, so we were looking for a permanent replacement.

Being the group’s founder, are you also the main catalyst for songwriting? How does that process work for you guys?
I think we work very well together. Mike and I have been writing together for years. He and I will just sit, sometimes for hours and just pound out riffs. We record everything too. I must have 60 gigs of material just sitting on hard drives around my house. We will then sequence riffs together based on vibe, tempo and energy to make sure we are capturing the right feel Mace needs to get across what he feels. And then there is Ryan. He makes sure everything flows and bounces according to his standards. It really is the most healthy writing routine I have ever been a part of.

When were the songs on Horizon written? Are these all older, newer or a mix of the two?
Definitely a mix. It was tough deciding which songs would make it on the debut, but we narrowed it down the five we felt would represent us the best and reach the most people. The oldest song on the EP is “The Desert Shade.” I wrote that song back in 2006 when I was in Dallas. The most recent one is probably “Dead,” written in November 2009.

What are your thoughts on the status of heavier music today? It seems that with all of metal’s sub-genres it’s easy to get classified as “this” or “that” and sort of get pigeonholed, you know? What does a band like Misamore have to do to stand out from the rest?
Well, I am only speaking for myself, but I think that a lot of the heavy music out today sounds very similar. To my ears, there are very few bands that stand out lately. Looking at the big picture there are always trends. Right now, in metal, I just hear breakdown after breakdown accompanied by myriad screams with techno beats for effect. Although it was kind of cool and different when I first heard it, I’m rather bored with it now. I can’t tell if it is my ADD or just my yearning for a new wave of timeless tunes. Misamore is all about energy. We pull from Muddy Waters to Norma Jean. At the end of the day it’s not about how hard a song is or if we got enough double kick or guitar harmonies in there. We want our songs to be in people’s iPods 20, 30, 50 years from now. That is our goal.

What’s more important to you, sounding good live or sounding good on record?
I would have to say sounding good live. However, most people will come to your show based on a good recording. I like the old fashioned word of mouth and the respect that it brings from friends of friends telling their friends and so on. It’s kind of like we are all just a bunch of friends when we get to the venue. Life feels so synthetic lately with computers and texting and social networking; to get in front of a bunch of people and exchange energy with them, that is living man.