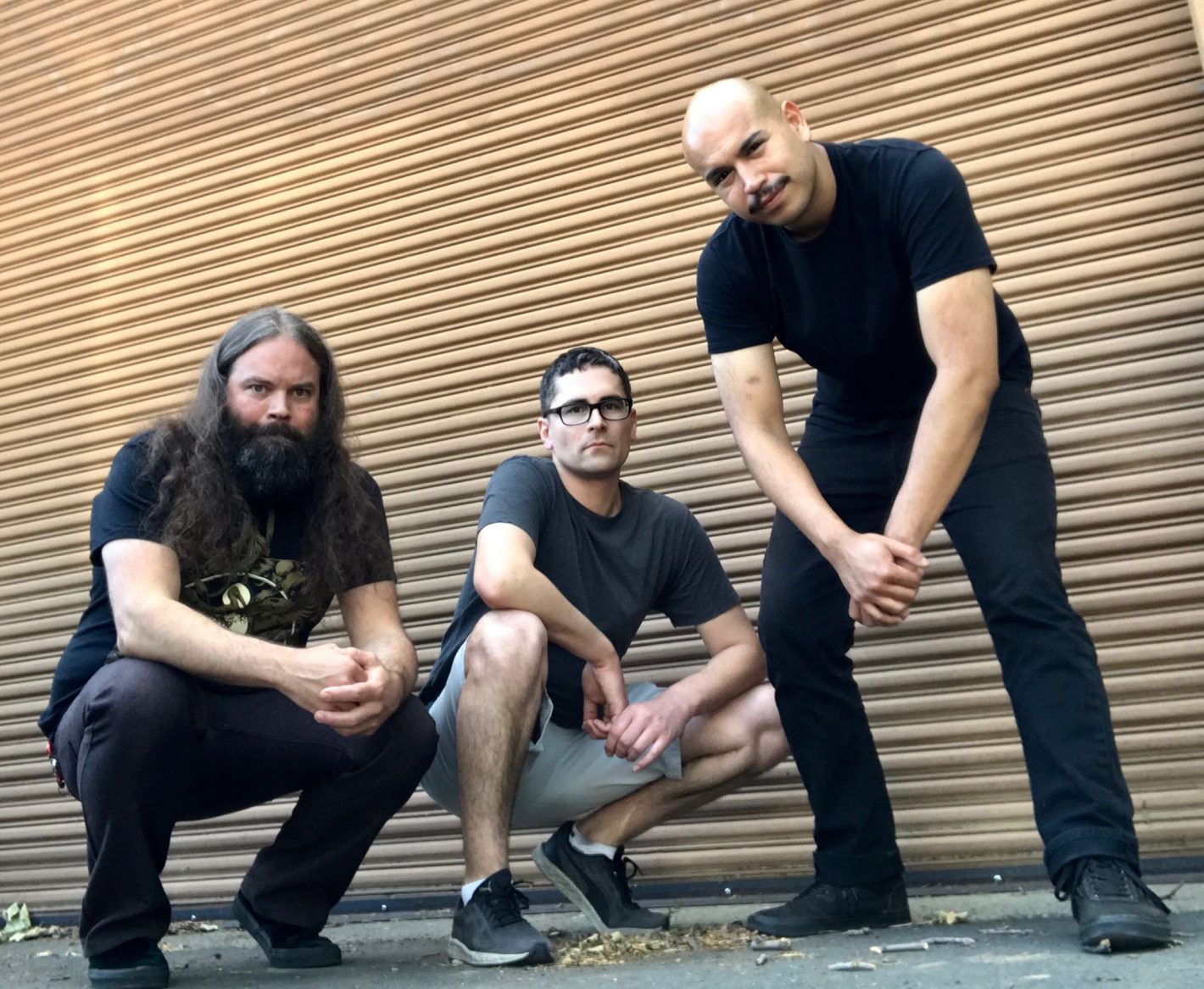 Metal musicians seem to take two extremes when it comes to how seriously they take their music. Either their new material they’ve been working on for the past decade will completely revolutionize the metal scene (and, in turn, society as a whole) or they use a picture of their own feces as an album cover and describe their sound as “hard as shit.”

Lucky for all of us, instrumental progressive metal outfit Modern Man gracefully falls somewhere in the middle—being able to bring together competing time signatures in a mind-bending way while naming that same song “Small Nuts, Big Sack” will do that to you.

“I mean, that’s just funny,” drummer Alfonso Portela says in regard to the band’s previously mentioned track. “It’s like a coin purse with 35 cents in it.”

Guitarists Jeremy Clemmons and Biaggio D’Anna share a laugh until they are composed enough to give their say. It should be said that Portela is also a stand-up comedian who frequents the local comedy scene.

“It’s funny, we were just talking today like, ‘Should we be more serious with our song titles?’” Clemmons says.

“You don’t want to get too pretentious about it,” Portela chimes in. “Like, ‘This song is a reflection on the human condition as it is in South Oak Park.’”

According to Clemmons, some fans thought the title of the track was the band’s statement about Sacramento’s current growth and those in power not “being ballsy enough” to make the right decisions to benefit the community.

“That’s actually why I wanted to call that song that,” D’Anna jokes.

The trio riff off of each other in conversation just like they would in band practice. They have an uncommon chemistry that they stumbled upon.

Clemmons and D’Anna had known each other for a few years having previously played together in a band called Competing. As that project began to wind down, the two had material that they didn’t want to hang out to dry.

Around the same time, D’Anna met Portela while they both worked at Insight Coffee. Portela, being a metal fan and having experience with drumming, suggested that they all just jam together.

“It was a perfect fit. Like, right away,” D’Anna says.

Portela’s style of drumming was not what Clemmons and D’Anna had expected for their music. Instead of traditional drumming that comes from most metal bands, Portela has a largely jazz and funk background. It’d been at least six years since he’d played any metal when he met D’Anna.

“I wasn’t in ‘shred shape’ at all,” Portela says. “I actually joined Modern Man to forgo a gym membership.”

All jokes aside, Modern Man takes all of this as serious as they can. Their music comes with defined intent and structure that isn’t always expected from a band with a song titled, “All Weenie, No Balls.” The band, however, still leaves room for experimentation.

D’Anna was on tour with one of his previous bands a few years back when he played a show with a couple of instrumental acts. He was “floored” by the other bands’ sets and knew he wanted to try his hand at keeping vocals out of the equation.

“There’s just so much you can do without vocals,” D’Anna says.

As he waded through projects, eventually linking up with Clemmons before they formed Modern Man, it wasn’t hard for D’Anna to convince band members that having a vocalist wasn’t necessary.

“It’s really hard to find a vocalist that doesn’t stick to one genre,” Clemmons says. “It’s like you get put into that category and we’re trying not to be in one particular category. We like being hybrid.”

“Without vocals, it’s like it took the walls off the box,” D’Anna says. “Instead of being in the box, we’re out of the box and we can pretty much do whatever we want.”

This doesn’t mean that there won’t be a Modern Man song without a voice on the track in the future since it’s all about being able to do whatever the hell these three want with their music. Besides, Portela says that he’s constantly singing and screaming as he’s playing.

The band’s new album is a long time coming for these three as individuals. It’s more than a first record for the band.

“This CD is the first professionally done CD I’ve ever been on in my life and I’m super proud of it,” Clemmons says.

It’s also something the band has been waiting to put out there. According to the liner notes, the album was recorded in 2016 and it’s just now seeing its wide release.

Modern Man is also playing their album release show at Blue Lamp on June 8 with Behold … the Arctopus, a band they hold in high regard.

As independent as they are, Modern Man still owes plenty to support and help from friends. They don’t have a bassist proper, but their friend Carson McWhirter played bass on their album. If it wasn’t for Elias Kuhlmann, the band wouldn’t even have a logo.

As with any band, each member has their role. The guys in Modern Man know their roles and they understand how those pieces form the puzzle.

As Clemmons puts it, D’Anna is the one who got him to start experimenting with different songwriting styles and genres. That influence pushed Clemmons to strive toward bringing in more creativity. Then, once Portela joined, Clemmons and D’Anna began to focus on structure and technique because that’s the part of music that comes naturally to Portela.

They all have their elements they bring into play that form the three-piece you’ve been reading about. It’s rather lazy to say that a band has chemistry, but that’s what is at Modern Man’s core: a chemistry that allows for them to experiment and go off the beaten path with their music, but still allows them to refine and control what happens on that path.

Celebrate the release of Modern Man’s debut CD at Blue Lamp (1400 Alhambra Blvd., Sacramento) on June 8 at 8 p.m. Also performing will be Behold … the Arctopus from New York, featuring Colin Marston of Dysrhythmia, Krallice and Gorguts. Tickets for this 21-and-over show are $10 in advance. For more info, go to Bluelampsacramento.com.