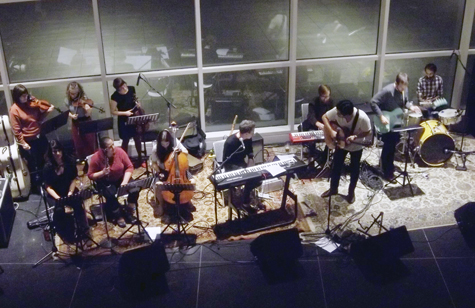 On a normal afternoon the Crocker Art Museum is usually filled with art enthusiasts who quietly soak in the historic and modern art pieces as they roam the halls. But last week on a chilly January night, the art museum was humming. Upon entering the museum lobby, there was a different vibe in the atmosphere. It was filled with excited guests who were patiently waiting for the “Baroque Bash,” a music and art celebration to honor one of the Crockers current exhibitions called Florence and the Baroque: Paintings from the Haukohl Family Collection, to start. People were busy talking in small groups or sipping on glasses of wine and beer. After all, there might not be a better way to properly appreciate 16th century artwork than with a glass of classy wine in hand.

As the room waited patiently for the musical performance by Doom Bird to start, most eyes wandered to the left side of the lobby where museum goers could participate in art demonstrations. A few aspiring artists were caught sketching costume drawings from the Baroque period, along with the help of artist Arturo Balderama. A woman dressed in an elegant dress from the 17th century was modeling for the artists and wandering the lobby so people could appreciate her wardrobe.

The musical portion of the show began with relaxing melodies from three instrumentalists who gracefully took strums at a cello and two violins. During their performance, the majority of the audience members seemed to appreciate the music, but were also a little distracted by their surroundings.

After the classical performance ended, Doom Bird was ready to take the stage (which consisted of two rugs on the floor). Band members Kris Anaya and Joseph Davancens were accompanied by many local musical guests for the night including Krystyna Taylor (cellist from Exquisite Crops), Arjun Singh (drummer from Wallpaper) and Adam Wade (singer from Golden Cadillacs). Depending on the night, Doom Bird enjoys to be backed up by great musical talent to keep their shows lively and entertaining. “Joe and I usually play with a large group of people for shows,” Anaya described in an e-mail the day after show. “It usually keeps the audience excited about what we are trying to present in our music.” Although the band admitted that they had not performed in nine months, the performance from the musical group was peaceful and flawless. Each song provided the audience with calming but powerful music notes, making the perfect blend of classical and alternative tunes.

For most of the set, frontman Anaya didn’t have much to say to the audience except for the occasional thank you. But during the middle of their set, Anaya noted that the lobby of the museum resembled a mini airport. “Welcome to the International Crocker Airport,” he joked over the microphone. Taking a bird’s eye view of the museum, it did resemble a map from a stereotypical “airport.” Starting at the left of the lobby was a bar serving cocktails to guests, then families enjoying their dinners on square tables; the middle of the room was filled with rows of silver chairs facing the stage (resembling a waiting room). It provided an atmosphere that made the museum appear busy and full of life. Throughout the entire set, audience members could take in the “artistic extravagance” of art and music that the Crocker Art Museum had hoped for.