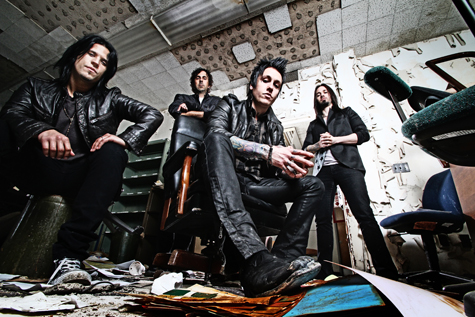 Papa Roach’s Jacoby Shaddix is addicted to bringing the rock

Love ‘em or hate ‘em, there is no denying that Papa Roach has earned their rank as one of the most successful bands to come from the Sacramento region. They’ve sold upwards of 10 million records worldwide, have toured the globe for over a decade playing venues packed with adoring fans and have truly lived the rock ‘n’ roll lifestyle. But for every high point, there’s been a low. Be it battles with their record label or battles within the band itself, Papa Roach has shed its fair share of blood, sweat and tears, most notably when they parted ways with long-time drummer Dave Buckner in 2008. It wasn’t a smooth split. Buckner, who in the early ‘90s co-founded the band with vocalist Jacoby Shaddix, filed suit against the band saying that they owed him money. They ultimately settled out of court. Papa Roach has since continued on with new drummer Tony Palermo of the San Diego rock group Unwritten Law.

Through all the ups and downs, there have been a number of things keeping P-Roach pushing ahead, Shaddix explained during a recent interview with Submerge. “I would say our relationship with our fan base, the kids that are coming out to the shows being affected by the music,” he said. “We’ve just got that drive inside of us as a band. We’ve got this heart that just fucking pops. It’s all we got and it’s all we need. We all are living this dream, which sometimes can seem like a nightmare, but I’d sound like a bitch if I were to complain. We just love it.”

As for the incalculable hardships that always seem to creep their way into the picture, Shaddix said that after a career like theirs, he and his crew are ready to take on anything. “It’s always a challenge. You’re always up against a challenge,” he said. “But the members of this band are always up for it. I think it makes it easier for us as time goes by too because we’ve just seen so many genres come and go and so many trends come and go.” He chuckles. “We almost came and went.”

In the following interview, we chat with Shaddix about his band’s deep Sacramento roots, how making music is like a drug, their plans for a new full-length record and more. Be sure to catch Papa Roach live in Sacramento for their first time in years when they headline Ace of Spades two nights in a row on Feb. 25 and 26, 2011.

What are some of the first thoughts that come to mind when you think back to Papa Roach’s humble beginnings when you were gigging in and around Sacramento all of the time? Do you ever trip out on how far you’ve come?
For me it’s a daily kind of realization, more so when I’m home around the people that I was with. Not only am I with my band on the road, but then it’s like we’ve got sound guys and light guys, a whole crew, you know? I never had that back in the day. Then I come home, and I’m back around my wife. She’s been with me since I had Papa Roach in the very beginning. We’re old school. We go through our old photos, and we see pictures of me and my wife and my band from way back in the day. My band was in my wedding way back. It’s a trip, you know, especially when I come back home.

I used to go watch you guys in the late ‘90s at this little club near where I grew up, the Gaslighter Theater in Gilroy, Calif. Do you remember that place? That was right on the brink of when you guys were getting the major label deal and whatnot I think.
Fuck yeah, dude! That was a really cool time for P-Roach.

I tripped out when talking to Eric Rushing, longtime Sacramento music enthusiast and promoter, the other day about that era of P-Roach because he was like, “Yeah those were my shows even down there. I was at most of those shows!”
Yeah for these upcoming shows that we’re doing in Sacramento, just to interject on that point, it’s kind of a full circle for us 10 years later. Eric and Brett [Bair] have been very successful. Brett used to manage Papa Roach; we split the sheets, we’re still OK, and we’re friends and such. But it’s cool to see that people who started in Sacramento are all still around here killing it. That’s even kind of why we wanted to put the type of bill together that we put together.

So the first night it’s Track Fighter, Will Haven and you guys. The second night it’s Lonely Kings, MC Rut and you guys. So many good Sacramento-based bands! I’m especially digging MC Rut lately. They’ve got a crazy work ethic. Are you familiar?
Fuck yeah, dude. That record is one of my favorites. I mean you’ve got to work hard in this business no matter what. If you want to make it, you’ve got to go in and slug it out in the trenches and build a fan base by playing rock shows. That’s the proving ground for rock music is touring. If you come with a hot song for a minute, that’s all good, but can you go out and tour and pack houses and rock audiences throughout America? Not just like San Francisco and New York, I’m talking, like America, you know what I mean?

Bringing it back to Sacramento for a second, don’t you guys own a studio space downtown? What’s that space all about?
Yeah right now it’s just pretty much essentially a demo studio for Papa Roach, and we’ll have some bands go in there. Like Dance Gavin Dance is going in a few days. They’ll be in there making some noise. Michael Rosen, he used to run out of J Street Recorders, Brian Wheat’s studio, he’s been bringing down some of his gear. He’s got really good gear, and he’s pretty much running it like a proper studio at times with bands. So that’s cool as well. We just don’t want it to collect dust while we’re out on the road.

Must be nice to just to get new riffs and song ideas recorded fast?
Yeah, exactly. I just got a new jam from Tobin [Esperance, bass] today actually. He programmed it on his computer, did the beats himself. There’s no guitar on it yet. It’s just keyboard sounds right now, but it’s like Papa Roach meets…I don’t know, it’s real good though.

So it’s sounding like there’s going to be another full-length ready for release sometime when? Next year?
Pretty much what we’re doing is this, Doomsday Radio, 2012, Papa Roach.

Oh really? I didn’t see that anywhere in any of my research! Is that a working title?
Yup. Working title, Doomsday Radio. There you go, print it.

Throughout the years Papa Roach has morphed quite a bit musically; it always seems like you’re progressing your sound. Can you talk a little about the many phases of your band?
I think for us it’s always been, “Go where the music takes us.” That’s the goal with Papa Roach: If it moves us, we think it will move our fans, and sometimes that’s true and sometimes it’s not. I think more times than not it has moved our fans. That progression that you speak of, we’re still in it. The track that Tobin just sent me, I was like, “Oh shit here we going again, we’re flippin’ it up.” But I’m into it, man. Music is this drug, and you want to try all different types of them. It’s like sex, you know, it’s like you do it the same way over and over and it just gets boring, so you’ve got to flip it up, put a wig on her, hit it doggy style. Switch it up.

What sort of vibe does the new song that Tobin sent you have? I read somewhere that Jerry [Horton, guitar] said the new record will have more electronic elements or something like that?
Oh yeah, for sure. It’s like somewhere between Prodigy meets Nine Inch Nails meets Papa Roach. It’s still got our sound to it, though, like when you hear the groove and the vibe, it’s still us, it’s just sometimes we want to use that texture in the music. I think we started to dabble in it with songs like “Burn” and “Kick in the Teeth” [off of 2010’s Time for Annihilation…On the Record and On the Road]. I think that it’s fun and our fans are receptive to it, and we like it because it opens up a whole new floodgate for us. I think it can make our music more beat-driven at times, which will be fun.

What’s one big goal of yours for the next record?
I don’t want to make a record that sounds like I’m a 35-year-old man, because I am a 35-year-old man, or I’m going to be, but I’m an exciting motherfucker when it comes to making music. I don’t want to make music that sounds compromised. That’s the goal for the next record is to kind of–and we’ve discussed this together–is to make a record that’s a little bit more experimental at times and a little bit more progressive. The last couple records have been song, song, song, etc. If you look back at one of our first releases, Old Friends from Young Years, there was a whole concept behind the way the record was laid out. I think we want to do something like that again.

Like as far as flow and transition tracks and whatnot?
Exactly, just to kind of dig deeper and make it more of an experience this time around. Not really a concept record, but something that is more than just song, song, song, song.

Even to the way that we’re going to do music videos in the future and the way that the band is imaged as well. For us, it’s a goal to kind of evolve all elements of what we do just a bit.

You might be getting older, but I sense that you are just as hungry as ever to succeed.

Yeah, look at the Chili Peppers. You don’t think of it that way. You think it’s just timeless. That’s what we’re going for. We’ve got a long, long road ahead of us. This is just another step in the path for us.

Papa Roach has heavy staying power in the music business, doesn’t it? It’s been so many years, but you guys remain relevant.
We definitely don’t take that shit for granted. But the fight is not over, dude. You look at a band like Green Day, they made that record, you know what I’m saying? For us, we still feel like we have that record in us. We still feel like we haven’t made the record of our career. Maybe it’s just that junkie inside me. 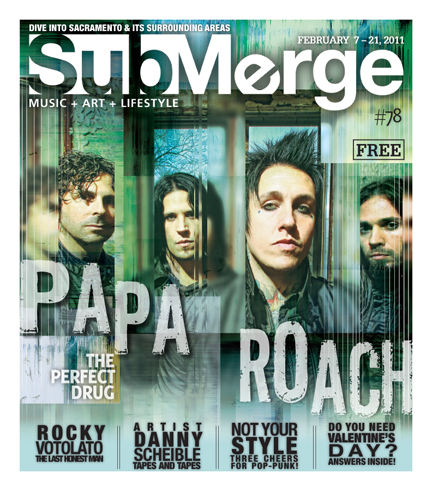 Papa Roach will play live in Sacramento for the first time in years at Ace of Spades (1417 R Street) on Feb. 25 and 26, 2011. Tickets are available at Dimple Records, The Beat, Armadillo (in Davis) and online at aceofspadessac.com. Grab their latest album, Time for Annihilation…On the Record and On the Road, a collection of nine live renditions of P-Roach hits and five newly recorded tracks, at record stores everywhere or through any major online retailer.